The Battle on Campus 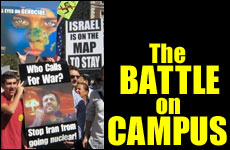 As anti-Israel propaganda on campus increases in new and alarming ways, defenders of Israel must face their opponents head on.

In the war for Israel's public image, college campuses are the front lines. This year, as Israel prepares to celebrate 60 years of independence, there has been a significant increase in anti-Israel propaganda and programming on campuses across North America.

Last August, two leading American academics, John Mearsheimer and Stephen Walt, published a book arguing that the United States' friendly relationship with Israel is a strategic liability for the US. In addition to claiming that Israel is the cause of (and by extension, the justification for) terrorism, Walt and Mearsheimer alleged that supporters of Israel caused the Iraq war and seek a war with Iran. Since the publication of their New York Times bestseller, Walt and Mearsheimer have been speaking to packed audiences at universities around the world.

A few months later, Columbia University invited Iranian president Mahmoud Ahmadinejad to address the campus community. Ahmadinejad, who has called the Holocaust an exaggeration and wants Israel to be "wiped off the map," gave a widely publicized speech that, while not well-received overall, elicited applause when he spoke of Israel as a country "based on ethnic discrimination."

Other prominent propagandists, such as Jewish professor Norman Finkelstein, a vocal champion of Hezbollah, and the directors of "Occupation 101," an error-filled ‘documentary' accusing Israel of ethnic cleansing, regularly appear before enthusiastic crowds at universities throughout North America.

Most recently, community and student activists in 28 cities around the world staged "Israel Apartheid Week" (IAW) campaigns during the month of February. The organizers of these events call for boycotts, divestment and sanctions against Israel. Over the last several years, these events have grown in size, breadth, and student involvement.

In the Israel activism community, the prevailing strategy has been to ignore this propaganda and focus exclusively on proactive strategies like positive educational programming, coalition building and cultural events. But as anti-Israel propaganda increases in new and alarming ways, and as the audience exposed grows larger, defenders of Israel must face their opponents head on. 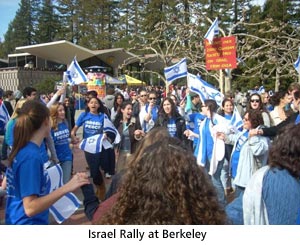 At UC Berkeley in San Francisco, Israel activists organized an "Israeli Peace and Diversity Week" that included a film about the effects of suicide bombing and an hour-long Sderot demonstration in which a rocket alarm was sounded every 10-15 minutes and the students staged a mock run to bomb shelters. During a rally championing Israeli democracy and human rights, pro-Israel students were surrounded by anti-Israel demonstrators chanting "From the river to the sea, Palestine will be free!" But the pro-Israel students held their heads high throughout the week, emphasizing Israel's quest for peace despite a relentless terrorist onslaught.

At York University in Toronto, students decided to change the subject and discuss the real perpetrators of discrimination and abuse in the Middle East, including Iran, Saudi Arabia, and Egypt. The York students created a large scale exhibit detailing the stoning and honor killings that take place in the Middle East today, as well as the persecution of women, gays and religious minorities. Over the course of the day over 1000 people attended the exhibit, giving the student activists ample opportunity to discuss the real causes of strife in the Middle East.

Our goal at Hasbara Fellowships is to give students the knowledge, resources and motivation to take action.

At New York University, pro-Israel students prepared for Israel Apartheid Week by attending an activism training session where they learned how to debate effectively, engage the uninformed, and write opinion pieces. Several of these students then attended an anti-Israel panel where they reported being harassed and openly threatened. The students still managed to ask the panelists pointed questions that revealed the depth of their prejudices against Israel and swayed moderates in the crowd against the message of the event. The students also actively engaged audience members before and after the event, providing them with written materials and clearing up misconceptions about Israel.

Many of the students who organized and participated in solidarity with Israel have been trained by Hasbara Fellowships and other Israel activism organizations that seek to educate, train and inspire students to stand up for Israel. Raised with different levels of Zionism, religious observance and Jewish identity, these students have two important things in common: a certainty that Israel is unfairly and inaccurately criticized on campus, and a desire to do something about it. Our goal at Hasbara Fellowships is to give them the knowledge, resources and motivation to take action.

In order for an Israel advocacy effort to make a positive impact on campus, we seek to train student leaders how to proactively communicate for Israel and how to defeat anti-Israel propaganda as well. During an intensive two-week training program in Israel, students gain an in-depth education from prominent academics, journalists and policy experts, as well as learning role playing and debate techniques to properly channel their knowledge. Participants then attend activism workshops that cover topics such as group organization and engagement, coalition building, and running successful programming. When these students return to campus, they are assisted by a full-time staff providing educational and financial resources, hands-on guidance and friendly support.

What better way to cultivate Jewish pride than by sending the message that it is our responsibility to stand up for Israel?

But ultimately, once a student is given the tools and the motivation, the responsibility lies with them. These student leaders focus much of their efforts toward highlighting the positive aspects of Israel, but when anti-Israel propaganda comes to their campuses they are faced with the difficult task on confronting it directly. The fact that they do so with such passion is a cause for celebration. Despite the dire situation Israel faces both within and beyond its borders, we should recognize and encourage the young Jewish leaders assuming responsibility for the perception of Israel on campus.

The implications of the campus movement for Israel extend even further. We must also consider the message we want to send to our youth. We want Jewish college students to be proud of Israel and, by extension, proud to be Jewish. We want our youth to see themselves as the future of the Jewish nation and to embrace that responsibility with enthusiasm. 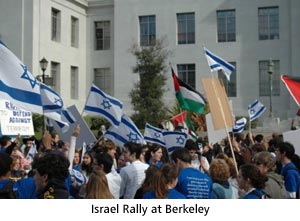 We must acknowledge that in today's modern world of opportunity and choice, Jewish pride must compete in the marketplace of ideas. What better way to cultivate Jewish pride than by sending the message that it is our responsibility to stand up for Israel? This lesson will extend beyond that message -- we will also be teaching our young leaders that the future of the Jewish people is in their hands.

Hasbara Fellowships is running four Israel activism training programs in Israel this summer. There will be two regular programs for college students, as well as a mission to Poland and Israel, and a Canadian program. Please visit our website, www.israelactivism.com, for details and to apply.
Like What You Read?  Give Jews around the world the chance to experience engaging Jewish wisdom with more articles and videos on Aish. It would make your mother so proud and as a nonprofit organization it's your support that keeps us going. Thanks a ton!

Let Aish Say Kaddish for You

A Steppingstone to Judaism
Korach 5782: Visit to Lift the Spirit
That Time The Ivy League Found A Way To Limit Jewish Enrollment
Would You Rather Be Right or Happy?
Comments
MOST POPULAR IN Israel
Our privacy policy