Gearing Up for Rosh Hashana 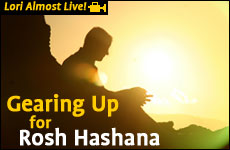 It's the time to fall in love with God again.

Something New This Yom Kippur

Elul: Tax Season for Your Soul

We Want It NOW

Rosh Hashanah: Extending Life
Bechukotai 5782: Divine Retribution
Behar 5782: Working to Live or Living to Work?
The Wholeness of Being Broken
Comments
MOST POPULAR IN Spirituality
Our privacy policy