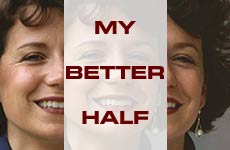 King Solomon had it easy. It's splitting the mother in half that causes real problems.

I recently turned on the TV and an ad caught my eye: a carload of zombie children smiling in headphones, silent but for a few cute giggles. The camera soon reveals why they're so preternaturally well-behaved: a Bugs Bunny cartoon. "Chevy Venture: The Quiet Ride," the ad promised, ushering in another era of children seen but not heard.

Is it any wonder that daycare hours are getting longer? Many are open twelve hours a day. And daycares now let parents dump newborns as young as two weeks, boasting stimulating educational "programs" designed to make parents' absences seem beneficial.

I know this mindset all too well - I've been there myself. As a divorced mom, I've been working full-time since my children were tiny. My company's needs always came first; I resented "inconveniences" like a sick child. Back then, I was happy to work, certain I'd go crazy, cooped up with kids. But looking back, I think I made a mistake.

After four years in daycare, my daughter still begs me every morning not to leave her behind.

Don't get me wrong; I chose a terrific daycare; I have nothing but praise for the staff. But the minute my son first called me by his teacher's name, I realized she'd never love him as much as he deserved.

After four years in daycare, my daughter still begs me every morning not to leave her behind. She'd gladly trade her action-packed day, with swimming and crafts, for a few hours at home on the sofa with me.

At first, I resisted, not allowing myself to feel "guilted" by her pleas. Then, I realized: shouldn't somebody be listening to her? I only regret that I didn't hear her little voice sooner.

King Solomon had it easy. Take a baby, split it in half, and whoever begs you to stop is the real mother -- no problem! It's splitting the mother in half, I learned, that causes real problems.

At first, I shrugged the feelings off; it's hard to start listening. Everybody said my kids would benefit from my satisfying career; study after study reassured me that they weren't suffering from my absence. Society, I saw, had devalued the parent-child relationship to the extent that it's now a spare-time pursuit.

When pulled in two directions, my mommy half would automatically give.

Realizing this, I began noticing ways my kids were getting short shrift. When pulled in two directions, my mommy half would automatically give. I'd rush to go out in the morning, but dawdle after work - anything else would be "unprofessional."

At my job, I gradually realized, I'm replaceable. To my kids, I'll never be. So I resolved to shift priorities; my children will never again take second place to a job description my employer could cut from the payroll tomorrow.

The tough part was putting it into practice. The Chassidic teacher Rabbi Nachman said, "the whole world is a very narrow bridge; the main thing is not to fear at all." I resolved not to be intimidated into being a second-class mommy. I'd do what it takes to keep my job, staying on the narrow bridge, but carving out time for my kids, even if work suffered.

The first test of my new resolution came early this year. My daughter's birthday was a school day, and she wanted me beside her, with doughnuts and loot bags, singing "Happy Birthday." But I'd already missed a lot of work, between her Chanukah play and my son's winter vacation.

I could have just sent in doughnuts; we were planning a family party for that Sunday, so I wasn't essential. But I told my boss I was leaving at 3. My daughter would only turn five once; I was going to be there.

Short on professionalism? Perhaps. Or perhaps just a different kind of professionalism. I left work and raced uptown, arriving in time for the party, where she showed me off to her friends.

I wonder if parents who fall for the Chevy Venture ads know what they're missing.

I wonder if parents who fall for the Chevy Venture ads know what they're missing. My kids have a better relationship with the back of my head than the front. I can't imagine sacrificing our conversations "on the go" -- about aliens, robots, bacteria, soccer and God -- for a more peaceful drive. Sure, they dish out their share of "how much longer?"s, but once in a blue moon, there's the random "I love you" I wouldn't miss for the world.

Kids need parents. A simple formula, but twisted around many times over. Even "quality time," that often used excuse for neglect, is being eroded. You can skip the breakfast cereal routine if the daycare opens at six. And family vacations? Well, let's just say yours will never be the same if you spring for the Chevy Venture.

These days, I'm trying to give my kids "quantity time" instead. I gave up a fifth of my income and stopped working Fridays, keeping them home whenever possible. We take trips in our TV-free car, giving them no choice but to watch the back of my head and ask whether seagulls can fly to heaven.

I thought I'd have to wait years to see any payoff, but recently, I was out walking with my daughter, and I asked what she wants to do when she gets big. I rattled off careers in the modern equal-opportunity way: veterinarian, firefighter, writer. She kept saying no, and finally I suggested, "A mommy?" She nodded. "So you can stay home and look after your children?" I asked, cautiously. Another nod.

Equal opportunity is wonderful. But there is one unequal opportunity that we should take if we can: the (and fleeting!) chance to parent our own children. Even if you have to split yourself in half to do it, make sure your kids get to pick the best half.

Jennifer M. Paquette lives with her two children in Toronto, where she works for a Jewish seniors' centre. Her articles and essays have appeared in many Canadian and international publications, including Today's Parent, The Jewish Week and Jewish Action, in the book "Chicken Soup for the Mother and Daughter Soul" (Health Publishing) and on CBC Radio. She freelances regularly for the Canadian Jewish News and is also a published fiction author.