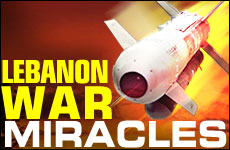 What kind of damage would you expect from 3,870 missiles?

Excerpted from "The Miracles of the Lebanon War" by Miyanei Hayeshua.

The first burst of missiles on Tzfat fell in the commercial center of the city, hitting the Tzalil Center which has many stories and offices. It was 2:40 in the afternoon, an hour when the city is teeming with people.

Although other towns along the border had been previously shot at, Tzfat residents didn't believe missiles could reach them. Tzfat had been outside of range for many years. Then, without any prior warning, missiles fell in the heart of the commercial center.

Missiles usually blow up when they hit something hard. Their immense speed results in the explosion and momentum forcing the missile's propelling charge into a hole created by the explosion. For instance, when it hits a house, the missile's entire destructive charge penetrates the house and explodes into thousands of pieces.

A Tzfat resident relates: "We knew that a war was going on and we knew that terrorists had shot missiles on the army base in Meron the night before. Despite this, we didn't believe that missiles could fall on Tzfat. Even when we heard the first missile falling, it still didn't register. Add to this the fact that during the first time it fell, you are standing helplessly. You can't stop the missiles, you don't know what to do, where to flee, which place is protected and what else! Can a missile pulverize an entire building? Perhaps you should flee the building? Maybe you should hide inside it instead? Maybe you should go down to the shelter? Where is it? Does this building even have a shelter? These were the questions that reeled through the minds of each one of us. We understood only too soon that the next missiles might wound us, only that this realization couldn't keep up with the speed of the missiles that fell one after the other, hitting Tzfat 's commercial center time and again."

Seconds later the second missile made another direct hit on the roof of a building filled with visitors... but didn't penetrate.

I met Yaakov Shitreet, the engineer who had built the shopping mall, a few days later. I praised him for the roof he had cast for the building which was strong enough to withstand the powerful concussion of the missile.

He stared at me, laughed, and said I was making a serious mistake. This roof was made of plain blocks and bricks, but it had one strong beam in it. Because it had to support the entire ceiling, the beam was made particularly durable with reinforced cement and iron reinforcements.

The missile had hit the beam and couldn't penetrate. Its fragments scattered all around and shattered the windows of the building, but didn't cause any loss in life.

Hezbollah's enhanced aiming ability also shocked Tiberias residents. Raphael Terebelsi, who was in Tiberias's Operations Room, relates, "It was in the middle of the war. We were preparing bombardment countermeasures and we knew that Tiberias was on the map of the terrorists across the border. A large part of Tiberias' residents had left the city at the beginning of the war and the only ones who remained were those who couldn't go to a hotel, who didn't have relatives to take them in, etc. Shikun Daled, a neighborhood in Tiberias, was filled with many residents who had no choice but to remain behind.

"In the Operations Room we hoped that if missiles hit Tiberias, they wouldn't hit Shikun Daled. It has ten-floor and higher buildings. Hitting such buildings would be especially lethal since the residents from the higher floors wouldn't be able to descend in time to the shelter. The missiles usually hit their destination within 15 seconds of the siren sounding.

"At the beginning of the war, missiles fell in every part of the city. What caught our attention is the fact that at this stage of the war, all the missiles were being aimed only at the neighborhoods that remained populated.

"I thought we should check that out. Could the terrorists have insider information from collaborators of one kind or another?

"That day, as soon as we heard the siren wailing, I asked our look-out to report where the missiles fell so we could send firefighting and first aid teams to the place where it fell."

"'The missile fell in Shikun Daled,' the look-out said in a trembling voice.

"We all turned pale. This neighborhood was packed with people. May God have compassion on us!

"What happened? This neighborhood was crowded, but between every building there were small parking lots. Since most of the residents don't own private cars and mostly use buses, the city planners didn't prepare large parking lots for the buildings. But these small parking lots were large enough to absorb all the missiles that the Hezbollah murderers sent against us.

"All the missiles fired at Shikun Daled -- every one, without exception -- hit the parking lots. The few cars that were there were damaged by the missile fragments but the many residents who remained in the area were saved."

3870 rockets of various kinds, large and small, were shot towards the northern towns. This number doesn't include the number of mortar shells fired at Kiryat Shemona and the towns and outposts in close proximity the security fence.

What were the results?

If one missile killed eight people in the railway depot in Haifa, what were 3970 missiles as well as hundreds of mortar shells that fell near the border capable of doing? This outcome is a miracle.

Every Jew Should Live in Israel for at Least a Year