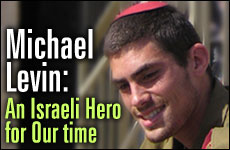 Friends of Michael Levin, 22, mourn his death and remember his inspiring life..

"You never saw Michael without a smile," said Rachel Tova Rott, a member of Michael's circle of Jerusalem friends. "We were all so close. Most of us are here in Israel alone, we live in Nachloat, and we bonded, became family for each other. When this whole mess in Lebanon began, I worried about Michael because he was on active duty in the IDF. Then someone said he'd gone to visit his family in Pennsylvania, and I was so relieved -- at least I didn't have to worry about him. Next thing we knew, he'd cut his vacation short and rejoined his unit. It was something he had to do, he said. 'If I didn't come back to fight with my unit, I wouldn't have any life anyway.'"

On Tuesday, August 1, two days before Tisha B'Av, First Sgt. Michael Levin, 22, died a hero's death. His unit, Battalion 890, had been clearing a building in Aita al-Shaab, a southern Lebanese town, when Hezbollah scored a direct hit with an anti-tank missile. The human toll was horrific – 11 wounded and three killed. Michael's comrade Shanir Turjeman told Ynet what happened: "I heard on the two-way radio that Michael was wounded, and I remembered the night before, when we'd been talking about girlfriends, family, and life," Turjeman said. "I'd lost eye contact with him during the heavy sniper fire and the antitank attack, and then during the evacuation I spotted him lying there, badly injured."

It turned out that Michael was killed instantly. His comrade, Shlomi Singer -- another Anglo immigrant -- tried to save him. "It was very difficult," Singer said. "We were under heavy fire, and all around us our friends were wounded."

On Tisha B'Av, Levin was laid to rest in Mount Hertzl Cemetery. His family – mother, father, sister Alisa and his twin sister Dara -- flew in from Pennsylvania. They were joined by hundreds of people from all over Israel who came to pay tribute to the young hero.

"There's a huge hole in our group," said Yael Ariel, another friend. "We're already so lonesome for him -- he's the one we need right now. If Michael were here, he'd have some funny little comment, some little quip. He'd say something to bring us out of it, to relieve the pressure."

To speak of Michael's courage and strength of character seems almost superfluous. At age 18, he deliberately chose the hard, dirty, dangerous work of the IDF by coming to Israel to enlist in the IDF as a 'lone soldier'. Officially, 'lone soldiers' serve in the MAHAL unit, a Hebrew acronym for "overseas volunteers". Native Israeli's give the acronym a different twist: they say the letters stand for “Meshuga’im M’Hutz L’Aretz” -- the 'crazy guys from outside Israel' who voluntarily enlist.

Levin's 'crazy' passion for Israel was ignited during his years at Camp Ramah. While many campers became enthusiastic Zionists, Michael was – he never let go of passion for Israel. His determination to not only live here, but to serve in the IDF, never wavered. Eytan Peer was Michael's Shaliach, the Israeli immigration agent, who processed Michael's application for aliyah. "Michael just showed up at my office in New York unannounced," Peer said. "He'd charmed his way in. In my entire career, I've only seen one other person so determined."

Upon arrival in Israel, Michael wasn't about to tolerate the built-in delay that allows most new immigrants several months to settle in and adjust to the Israeli way of life before starting IDF training. Michael fought for -- and received -- special permission to join the IDF almost right away. Once in, he fought again to get into the elite Paratroopers Brigade, becoming one of the few former Americans ever to do so. He had to fight against another disadvantage: he was so slightly built, so thin, that the first time he parachuted, he drifted off course. After that, they attached weights to his parachute.

Michael was an overachiever in everything he did. Not only was he an A+ student during his 2001 term at the Alexander Muss High School in Israel, but everyone who knew him came away with a greater love for Israel themselves. "Michael always ran ahead of everyone else," Yael Ariel recalled. "No matter what it was, he volunteered to do it. When he come back to rejoin his unit, they tried to send him to Hevron, but again he fought -- he wanted to serve in Lebanon.

Michael was more than brave. Courage was part of his character.

"Was that brave?" Ariel asked. "That word doesn't really fit Michael – he was more than brave. Michael wasn't a person who did brave things. Instead, courage was part of his character. Like his coming alone to Israel to enlist in the IDF – that wasn't 'brave', so much as it was a reflection of who he was."

"In anything he did, we worked harder than anyone else," Rachel Tova Rott added. "When he was training, he weighed about 125 pounds, but part of the regimen was to run carrying a 120-pound pack. The pack weighted almost as much as he did, but he did it anyway."

Many of Michael's friends and family believe he had some premonition of his fate. "It upset me at the time," Rott says. "He'd say things like, 'if I come back', and 'if I get out of this'. I begged him to stop, not say that, but it wasn't as though he was depressed -- exactly the opposite. It was as though he knew what his job was, what he was supposed to do in this world. And -- just as he did with everything else -- he ran ahead to do it with enthusiasm, happy to be able to serve Israel. He was just the most remarkably upbeat, positive, kind and caring person I've ever met."

"Mike was a very spiritual guy," said Yitzhak Meir, another Jerusalem friend. "Shabbat will never be the same without him. Michael loved to sing zemirot, Shabbat songs. No matter how many we sang, he always wanted to sing one more. One time there was someone at the Shabbat table that wasn't really getting into it, and Mike was encouraging him, 'You gotta sing!' he said. 'You can't feel Shabbat unless you sing!' Then he'd start another song."

"Michael had a way of relating to everyone as their best friend," Meir said. "No matter who he was talking to, he made them feel special. In everything he did, he gave his all, whether it was listening to a friend, cheering at a football game, singing on Shabbat, or serving in the IDF."

There are no doubt hundreds of people all over the world who thought of Michael as his or her best friend. "I always knew that if there was ever a time when I needed help, for anything, I could call Michael and he'd come," Yael Ariel said. "If he was anywhere in the area, not on a mission, he'd be there, right away. It would never occur to him that it was too late, that it was a long way, or that he was exhausted himself. If someone needed him, he was there.

"The one thing that comforts me now is that Michael knew we loved him," Ariel said. "Sometimes when people pass away, you feel you should have told them more how much they meant to you, how much you loved them. But with Michael, he knew. He knew how much we all loved him, trusted him and appreciated him. That helps -- to know that he died understanding how much he meant to all of us."

Our Sages tell us that when a righteous person leaves this world, his presence can be felt more strongly in all the worlds than it was during his lifetime. Freed from his physical body, his influence will be even greater.

Michael himself may have understood that. About a month ago, he and a friend from a kibbutz were talking, lamenting the many losses Israel has suffered.. 'Why is it that all the good ones, the stong ones, die first?' the friend asked. Michael thought a moment, then said, "Maybe the real war is up there, and God needs them there."

Rest in peace, Michael Levin. You fought the good fight, you gave your best, every time. The True Judge, Blessed be He, has called you home to continue your work from another plane. May all of us who knew you, and all who met you only through your story, be blessed by your courage, your love of life, and your passion for Israel and the Jewish people. We love you, Michael. We'll never forget your smile, and with your help, we'll continue working to accomplish all the things you wanted for your beloved homeland.

Gates of Heaven: A Yom HaZikaron Video
Should I Break Up, Get Engaged or Keep Dating?
Time Is Your Precious Commodity
A Constant World in Flux
Comments
MOST POPULAR IN Israel
Our privacy policy