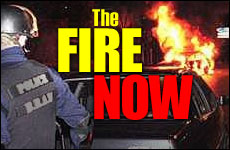 Barbarians at the gates of Paris.

Though the cost in lives and to the economy from the more than two weeks of urban riots in France does not rival that from the July 7 suicide bombs in London, the former has sent a message nearly as terrifying throughout Europe. While France has the largest foreign-born population of any Western European country, every European country has similar urban ghettos that are "no-go" areas for police and firefighters. In Belgium, police officers are advised not to drink coffee in public during the Islamic month of Ramadan, when devout Moslems fast, and in Malmo, Sweden's second largest city, ambulance drivers will not enter Moslem enclaves without police protection.

Copy-cat rioting broke out Germany and Denmark in the wake of the French riots. These riots herald, in the words of social critic Theodore Darymple, a new era, in which "the sweet dream of universal cultural compatibility has been replaced by the nightmare of permanent conflict."

The large cites that surround Paris and other French cities were created in the 1960s and 70s to house immigrants, primarily from North Africa and Francophone West Africa, needed during France's industrial boom. That boom ended in the '70s, but those who came to fill the jobs in the factories, by and large, remained.

France's sclerotic economy has produced few new jobs for the first-generation immigrants or for their numerous offspring. Over the last quarter century, the United States economy has produced 57 million jobs; the welfare economies of Western Europe have produced only 4 million. European labor laws make it so costly to hire a new worker and so difficult to fire them that few companies are willing to take chances on young, inexperienced, and poorly educated workers. As a consequence, among Moslem youth in France, the unemployment rate is estimated at around 40%.

In the urban ghettos ringing Paris, unemployed young men lounge around all day with nothing to do besides listening to the brutalizing rap music, on boom boxes that cause the sidewalk to shake at a distance of a hundred yards. The police enter these "sensitive" areas only when absolutely necessary, leaving psychopathic criminals and drug dealers as the local authority. "For the most furious among them, killing is just a game -- death inflicted or suffered by chance," writes Pascal Bruckner in The New Republic.

The ones who suffer most from the anarchy are the older immigrants, who find themselves trapped in these government-created ghettos. It is their cars and belongings that are going up in smoke. On an average night, even before the latest rioting, 80 cars a night were set on fire across France, and the urban ghettos have the burned out look of the South Bronx circa 1970.

The immigrants live well enough on France's social benefits, but there is absolutely nothing in their lives to give them any dignity.

By the standards of the rest of the world, and certainly compared to what they could earn in their native countries, the immigrants live well enough on France's social benefits. But there is absolutely nothing in their lives, and particularly those of the young, to give them any dignity. Each welfare payment is experienced as a wound, even as the recipients take those payments as their due for the humiliation thrust upon them by the French state.

The result as described by Darymple, in "Barbarians at the Gates of Paris: Surrounding the Ciy of Light are Cities of Darkness," is a degree of alienation found nowhere else in the world: "A kind of anti-society has grown up in [these cites of darkness] -- a population that derives the meaning of its life from the hatred it bears for the other 'official' society in France. This alienation . . . is written on the faces of the young men, most of them permanently unemployed, who hang out in the pocked and potholed open spaces between their dwellings. When you approach to speak to them, their immobile faces betray not a flicker of recognition of your shared humanity; they make no gesture to smooth social intercourse."

Few native-born Frenchmen have ever visited the vast housing projects encircling Paris and virtually every other city, but they feel the effects of these urban dystopias in skyrocketing crime rates. The excellent public transportation system places the richer central cities within easy access to the denizens of the surrounding ghettos.

Police chiefs in France are paid according to the crime rates in their districts, and so have a vested interest in underreporting crime. Yet even the reported statistics are horrifying. While the French population increased 20% between 1959 and 2002, crime rates increased 670%. From 1993 to 2000, cases of arson grew by 2,500 percent, and armed robbery rose by 15.8% in a single year between 1999 and 2000.

The criminals have little to fear from the criminal justice system. Darymple, for instance, watched three immigrant youths breaking into a taxi meter in a ritzy neighborhood in plain view of hundreds in nearby cafes. The three appeared oblivious to the possibility that such activities in broad daylight might result in arrest and prosecution. And indeed only two elderly people remonstrated with them, and no one deemed their actions of sufficient concern to summon the police.

he rage of the rioters is directed at the entire "French system," not just the Jews.

So far there is little evidence of Jewish institutions and businesses being targeted by the rioters. Some in the Jewish community have even shown a sort of perverse satisfaction in the riots, viewing them as a payback for the initial indifference shown by French authorities to an outbreak of anti-Jewish violence in the wake of 9/11. As Paule Levy of France's Radio Communite Juive told the Jerusalem Post, "When the Muslim people attacked the Jewish community, and the Jewish community said to the government, 'Help us, helps us. It's very important that you help us because after us it's going to be you.' [But] the government said, 'It's not a real problem and you're paranoid.' And today I think all the French are paranoid."

The French Republican ideal recognizes only individual liberties, not communal identity. As such it has always been highly suspicious of any manifestation of Jewish national identity, and been prone to viewing Jewish citizens as an unassimilable, not quiet French, minority. The latest rioting has shown France what a truly unassimilable minority looks like.

At the outset of the violence against Jews, Foreign Minister Hubert Vendrine came preciously close to justifying the violence, commenting, "One shouldn't necessarily be surprised that young French people from immigrant families feel compassion for the Palestinians and get agitated when they see what is happening." If the current riots prove anything, it is the futility of trying to purchase domestic tranquility by such pandering to anti-Israel or anti-Jewish sentiments among Moslem immigrants. The rage of the rioters is directed at the entire "French system," not just the Jews. (Nevertheless it is unlikely that France's traditional hostility to Israel will change dramatically as a consequence of the riots. That policy derives as much from France's view of itself as an antipode to American hegemony, as it does to domestic political considerations.)

Most of the rioters are nominally Moslem -- the suburb in which the original riots broke out is 80% Moslem. But unlike the July 7 suicide bombings in London, Islamism played a minor role, if any, in the spontaneous outbreak rioting across France.

Nevertheless as riots dragged on for weeks, there is evidence, via intercepted emails, of Islamist groups trying to take advantage of the chaos for their own purposes. And it is not hard to see how Islamism could exercise a powerful attraction for the rioters. Darymple analyzes the potential appeal of Islamism: "Imagine yourself a youth . . . believing yourself to be despised because of your origins by the larger society that you were born into, permanently condemned to unemployment by the system that contemptuously feed and clothes you, and surrounded by a contemptible nihilistic culture of despair, violence and crime. Is it not possible that you would seek a doctrine that would simultaneously explain your predicament, justify your wrath, point the way to your revenge and guarantee your salvation...? "

90% of the violence directed at Jews in France over the last five years is attributed to Muslims.

Already 90% of the violence directed at Jews in France over the last five years is attributed to Muslims. In a series of coordinated attacks across France on March 31 2002, a Lyons synagogue was torched by masked assailants, a shotgun fired into a kosher butcher shop in Toulouse, the Or Aviv Synagogue in Marseille reduced to ashes, and fire set to another synagogue in Strasbourg. And Jews in France have long been advised not to wear yarmulkes in public.

Any further spread of the Islamist poison among the nearly 10 million Moslem immigrants and their progeny in France would be one more piece of disastrous news for French Jews.

Papal Shocker
Don’t Believe in Other Gods Versus God is One
Seeing Without Eyes
Why Shouldn’t We Eat Whatever We Want?
Comments
MOST POPULAR IN Current Issues
Our privacy policy
Aish.com Is Looking for Great Writers