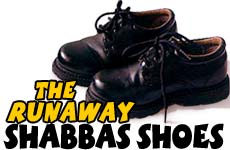 What does an eight-year-old take when he runs away from home?

They're nothing fancy, just plain black shoes with laces -- the kind your kids outgrow before they wear out. My sons wear these shoes for special occasions and for Shabbat. This particular pair of "Shabbas shoes," as we call them, were size 5.

I never thought much about these shoes until one day last spring when my then eight-year-old decided to run away. The cause of this historic first (and hopefully last) runaway episode was a combination of things. Avi was feeling overwhelmed -- too much homework, an argument with his brother Jacob, a "healthy" afterschool snack, (i.e. no cookies), and no time to play hockey.

Avi is a typical child. His priorities are food and hockey; hockey and food, depending upon the growl in his stomach. Total bliss is eating ice cream while watching the Philadelphia Flyers play.

I sent Avi to his room for a time out after the argument with Jacob. He emerged 10 minutes later with a suitcase in his hand and announced, "I'm running away!"

And out the door he went, leaving his astonished mother behind.

Before he reached the sidewalk, I coaxed him back inside for a bite to eat. (Thank goodness for those priorities!) I sat with him while he ate and we discussed the particulars of his running away. Where would he go? How would he eat? Where would he watch the Flyers? What did he pack?

Ah! What did he pack? He packed some clothes, a toothbrush, Cat (his favorite stuffed animal), a blanket, and his hockey cards. "Well, Avi, it sounds like you've got it all," I told him. Actually, it sounded like he packed for an overnight visit with Bubby, but I didn't tell him that for fear he would try to walk to her house in Cherry Hill.

"Oh yeah! And Mom, I packed my Shabbas shoes so I can meet you at shul on Shabbas, " he added nonchalantly.

I didn't know whether to laugh or cry, so I did both.

I didn't know whether to laugh or cry, so I did both. At that moment, I realized that his priorities were right on track. He did leave, walking ever so slowly toward the end of the street. I caught up with him about halfway. I hugged him and told him I'd miss him terribly if he ran away and that we should try to work out our problems. "Besides, I don't want to wait till Shabbas to see you again. Please come home."

He did, and as luck would have it, there was ice cream in the freezer and a Flyers game on television. As I unpacked his bag, I put the "Shabbas shoes" in his closet and truly appreciated the priorities of this eight-year-old.

Jan Weber is a writer and photographer living in Margate, NJ with her husband and two children.