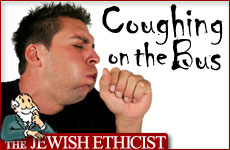 Flu victims should be careful in public places.

Q. I have the flu, but I have a meeting I just can't miss. Is it wrong for me to ride the bus?

A. Your concern for your fellow passengers is well placed. Flu is a disease which is spread by close contact with other victims, and health authorities have declared that crowded public areas such as schools or public transportation have a high potential for contagion.

We find many passages in the Talmud teaching caution for contagious diseases. One passage refers to a disease called "raatan"; the sages were concerned that it could be spread by an insect or by close contact:

In another passage, we find that when there is a plague in the city a person should try not to venture out, and preferably close his windows.

The Rabbis taught: When there is plague in the city, stay inside, as it is written (Exodus 12:22): And you, let no man go out of the door of his house until morning. . . Rava at the time of a [plague] affliction would close his windows, as it is written (Jeremiah 9:20) "For death has approached our windows". (2)

Later authorities acknowledge that spreading a contagious disease can sometimes be considered a type of damage or tort, which would require anyone having such a disease to exercise proper precaution. (3)

In the case of any kind of risk, there is always the question to what extent the burden is on the source of risk to avoid harm to others and to what extent on the potential victim to protect himself from harm. Indeed, the second chapter of Talmudic tractate Bava Batra is focused on this question. The answer depends largely on the known degree of risk and on convention.

To the best of my knowledge, health authorities have not directed flu victims to avoid public transportation; rather, they are directed to take appropriate precautions: to sneeze or cough only into a garment or mask, to keep the hands clean, and so on.

I think first of all that this is an appropriate balance between the need of flu victims to normal activities and the need to protect potential victims. I also think that public health authorities are the properly constituted bodies to determine the best balance. If they do in the future or in special cases decide the situation warrants sick people staying home, their directives should be respected.

Flu, including the swine flu, is not usually a deadly disease and there is no reason right now to quarantine victims as if they are a major public health risk. On the other hand, any flu and especially the current strain is at the least an annoyance and in many cases a real danger, so contagious individuals should think twice before mingling in public places and should take all reasonable precautions when they do.

The Jewish Ethicist - Apprentice
The Blue Beyond
Great Place to Live
Is Eating Supposed To Be Spiritual?
Comments
MOST POPULAR IN Current Issues
Our privacy policy