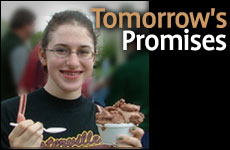 If I have learned nothing else through my 16-year-old daughter's death, it is that you can never tell your children enough times how much you love them.

Our daughter, Sarah, died very unexpectedly from what are unknown medical causes. She was a star student, avid violist and budding scientist. Literally, we had her one day and she died the next, within minutes of our even realizing something was very wrong. The doctors have not determined the cause of her septic shock, and at this point probably will not. Six months later they surmise that it must have been a virus, because they have found no bacterial toxins. But where it came from and why it did this to her so quickly are mysteries.

Her death hit our community hard because Sarah was the "girl next door." Her only risky behavior involved smoothies and cheesecake. Sarah hadn't even started dating. She spoke loudly against drugs, alcohol and tobacco. She drove speed limits and wore her seatbelt. If Sarah had been a fast lane kid, perhaps people could have rationalized her dying, but she wasn't and they can't. Instead, Sarah fingered her air viola to the classics station she played in her room and studied just hard enough to land in the top 6% of her 400-person class. She was an aid in Sunday School the day before she died, and attended her own religious school class that evening, with the same bubbly enthusiasm that she had every other day of her life. The next day Sarah was "plucked" from life with no explanation.

Since Sarah died I have hoped for a diagnosis I could turn into a cause. Although we know that a diagnosis would not bring Sarah back, I have agonized about not having one. Never did I think I would envy the mother of the child killed by a drunk driver or the one whose child died of a preventable disease. But in some strange way, I have. I told this to a new friend I have made since Sarah's death. Her daughter went to the same high school as Sarah and died a few days earlier from a methadone overdose. A teacher in our very suburban school district, this mom has taken the problem of suburban addiction and drug abuse to the schools, to the news and to the community. Her daughter's death could have been prevented and she is trying to prevent other moms from losing their kids. How I envy her for being able to make a difference for others, in her daughter's name.

Perhaps the cause to take in Sarah's name is to remind people tomorrow is not promised; we need to slow down our lives and care for our relationships today.

A new email contact I have made, since losing Sarah, lost his 6-year-old son to a freak accident with a school lunchroom table. He has turned his son's tragedy into a safety initiative for Ohio schools which is now before the legislature and affectionately known as Jared's Law. Jared's parents are making a difference for all of Ohio's elementary school kids.

But we don't know what killed Sarah, so the cause to undertake is not as obvious. Or is it? All I know is that when Sarah died she knew how much we loved her and we knew how much she loved us. For that I am thankful. In the rushed world we live in, I am not sure that all families feel that assured. Perhaps the cause to take in Sarah's name is to remind people tomorrow is not promised; we need to slow down our lives and care for our relationships today.

Tomorrow is not promised, so we need to take the time to be with the people we love, share in their passions and cheerlead their endeavors. We need to appreciate and love our kids today at their ball games and concerts and at home at the kitchen table. And our fast lane kids? They need that love and attention that much more because they are at greater risk. Although they think they are invincible, they too can be plucked from life at any moment. As parents, we cannot forget that.

A month before she died, Sarah and I sat at the dining room table working on a jigsaw puzzle. As we arranged pieces we talked. I told her that something was very wrong with this picture. She was 16 years old and getting along with her mother. I said, "Sarah, teenage girls aren't supposed to get along with their mothers, you are supposed to hate me."

As she left the room, she glanced back with an impish grin and responded, "Don't worry mom, I have three more years." If only we had those three years.

So as we figure out our new normal life, we embrace our other daughter, Anna, that much more. We play together, sing off key together and try to be there for each other. For we know all too well, that tomorrow is not promised, we need to appreciate and nurture relationships today.

This article originally appeared in The New Standard

The Electronic Chuppah
Blessing on Chewing Gum
Was Rahab a Prostitute?
Extras In Our Own Epic
Comments
MOST POPULAR IN Current Issues
Our privacy policy