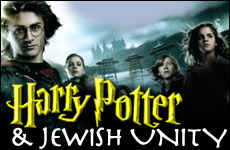 We are as strong as we are united.

At the end of the Goblet of Fire, Professor delivers some well-chosen words about the need for unity among students and all "wizardfolk" who oppose the evil wizard "Voldemort:

"Every guest in this hall ... will be welcomed back here, at any time, should they wish to come. I say to you all, once again -- in light of Voldemort's return, we are only as strong as we are united, as weak as we are divided.

"Voldemort's gift for spreading discord and enmity is very great. We can only fight it by showing an equally strong bond of friendship and trust. Differences of habit and language are nothing at all if our aims are identical and our hearts are open." (Goblets of Fire, chapter 37)

The next year, the sorting hat, the magical talking hat whose job it is to divide the students into the four schoolhouses, infuses the same theme into its start-of-year song:

"...And now the sorting hat is here
And you all know the score:
I sort you into houses
Because that's what I'm for.
But this year I'll go further,
Listen closely to my song:
Though condemned I am to split you
Still I worry that it's wrong.
...
Oh, know the peril, read the signs,
The warning history shows.
For our Hogwarts is in danger
From external deadly foes.
And we must unite inside her
Or we'll crumble from within.
I have told you, I have warned you...
Let the Sorting now begin."

(Order of the Phoenix, chapter 11)

The same lesson of the importance of unity is pervasive throughout the Torah and Jewish prayer. Jewish unity is both a Torah-ordained objective and a source of Divine strength.

The Torah describes how Joseph reveals his identity to his brothers, who had sold him into slavery 22 years earlier. Joseph had just thrown his youngest brother Benjamin in jail, in order to test how the other brothers reacted, and his brothers passed the test by offering themselves in exchange for Benjamin's release.

Joseph then calmed them with an elaborate pardon for their selling him into slavery. First, he assured them that their actions were divinely ordained in order to save the family from the famine. Second, in case they still felt shame for what they did, he told them that "it was not you who sent me here, but the Almighty" (Gen. 45:8). Last, in case they still felt remorse for Joseph's suffering during his time in Egypt, he reminded them that he had become "a lord of all [Pharaoh's] house and ruler over all the land of Egypt" (ibid.).

While we can be impressed with Joseph's willingness to let bygones be bygones, why did he go so overboard in his forgiveness? Why not let them feel some guilt for what they did? Why not at least wait for them to apologize? After all, they sold him into slavery!

Before we answer this question, consider another hard-to-understand aspect of the story. After forgiving them, Joseph was overcome with emotion and "he fell upon his brother Benjamin's neck and wept, and Benjamin wept upon his neck" (Gen. 45:14). This is an understandably touching scene. But a Midrash, quoted by Rashi, explains this in a puzzling way. Rashi explains that Joseph was weeping "for the two Holy Temples that were to be in Benjamin's portion of the land of Israel and were destined to be destroyed," while Benjamin was weeping over "the Tabernacle (predecessor of the Temples) of Shiloh destined to be in Joseph's portion, which also ended in destruction." This seems like a non-sequitur. Why would the brother' reunion elicit this response from Joseph and Benjamin, and this explanation by the Midrash and Rashi?

Selflessness is the antithesis of baseless hatred.

One explanation (given by Rabbi Avrohom Alter) is that Joseph and Benjamin had just seen the end of 22 years of suffering caused by baseless hatred between Joseph's brothers and Joseph. They knew prophetically that the hatred which had torn apart their own lives was a seed that could (and would) later tear apart the Jewish people. Therefore, they attempted to begin to rectify this baseless hatred, whose root is self-centeredness, by focusing entirely on the needs of others. The tears that they shed were particularly for the loss of the other. This concern for someone else's misfortune more than one's own demonstrates the selflessness which is the antithesis of baseless hatred.

This is also why Joseph was so careful to alleviate any feelings which could have continued to separate him from his brothers. Anything would be to retain some moral standing over his brothers. Instead, he wished to promote unity between himself and his brothers, to combat the hatred which had caused so much suffering, their remorse, to the point of eliminating it completely.

In fact, Joseph's entire rise to power in Egypt came as a direct result of his caring for others. Other sources point out that when Joseph was in prison in Egypt, he was only released to interpret Pharaoh's dreams because he cared enough to ask two of his fellow prisoners, "Why do you look troubled today?" (Gen. 40:6) One of these prisoners was subsequently released, heard that Pharaoh needed dreams interpreted and recommended Joseph. From these four Hebrew words of concern came his entire rise to second-in-command of Egypt.

Our sages tell us that the destruction of the Holy Temples, foreseen in the Midrash by Joseph and Benjamin, was in fact a Divine punishment for the baseless hatred that existed among the Jews at that time (Talmud Yoma 9b).

From Hatred to Unity

The theme of Jewish unity is found in many of our prayers and holidays.

Every month, on the Shabbat before the start of the new Jewish month, we say a special prayer called Kiddush HaChodesh, sanctification of the new month. This prayer includes a paragraph of hope for the Messianic era to come soon:

"May He who performed miracles for our ancestors, and took them from (Egyptian) slavery to freedom, may he redeem us too, soon, and gather us from the four corners of the earth. All Jews are friends, Amen."

This prayer is clearly connecting both the redemption from Egypt and our hope for future Divine redemption to friendship and unity between Jews.

We also see the theme of unity in one of the more puzzling symbols in the Passover Seder. Passover is probably the holiday most full of symbols, including matzah (redemption), maror (bitter slavery) and charoset (cement used in the hard labor of slavery). One of the symbols which is harder to understand is mentioned in the third of the Four Questions:

"On all other nights we do not dip our food even once, on this night (the Seder) we dip twice. "

This is referring to the two things that we dip during the Seder, the karpas (vegetable) in salt water and the maror (bitter herbs) in charoset.

What is the symbolism of dipping food?

Rabbi Matisyahu Solomon quotes a number of commentaries that connect these two "dippings" to two events that happened in the Bible involving dipping. The first was when Joseph's brothers sold him into slavery, and then "dipped" his coat (the "coat of many colors") into animal's blood to make their father (Jacob) believe that Joseph had been killed (Gen. 37:31). The second was right before the Exodus from Egypt, when the Jews were commanded to "dip" a bundle of hyssop branches into animal blood and paint it on their doorposts (Ex. 12:22), which would prevent the plague of the firstborn from affecting the house, and instead would make the plague "pass over" the Jewish houses.

The point of dipping branches in blood and painting it on our doors is not that they acted like pagans. The point is that they were symbolically taking the same act that was done previously in hatred (when Joseph's brothers sold him and dipped his coat in blood) and doing it now in Jewish unity. The "dipping" of hatred led to the exile and slavery in Egypt, while the "dipping" in Jewish unity led to the Exodus and redemption. By "dipping" and painting blood on the doorposts, they were demonstrating the removal of animosity from among the Jewish people.

This is the lesson of "dipping" during the Seder. Dipping can take a perfectly good tasting vegetable and make it salty, or can take something bitter and reduce the bitterness. The same action can lead to exile or Exodus. While we're remembering the Exodus during the Seder, we have to remember how we became worthy of Divine redemption: by taking animosity between Jews and turning it into unity.

In 1914, the Chassidic Rebbe of Belz made the following succinct statement concerning the difficult times felt by Jews of that era: "It is of the utmost importance that the Jews love one another. One must love even the lowliest Jew as himself. One must engender unity and keep far away from anything that causes disunity. The salvation of Israel during times of trouble rests on this.

Note that unity does not require agreeing with everyone. The Rebbe of Belz was not suggesting condoning the actions of "even the lowliest Jew." Rather, unity means disagreeing respectfully and treating others with love regardless of agreement or disagreement, and caring about the needs of others as we care about our own (Lev. 19:18).

Our goal as Jews should be to have so much unity that we become "representatives of nations, the nation of the God of Abraham," with all of our differences and yet complete unity of purpose.

We need, as Dumbledore said:

"...an equally strong bond of friendship and trust. Differences of habit and language are nothing at all if our aims are identical and our hearts are open. "

How Josephine Baker Risked her Life Fighting against Nazism
Korach 5782: Visit to Lift the Spirit
That Time The Ivy League Found A Way To Limit Jewish Enrollment
Would You Rather Be Right or Happy?
Comments
MOST POPULAR IN Israel
Our privacy policy