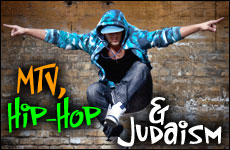 Can Judaism be “cool” enough for a new generation?

Caleb Tanenbaum is your typical teenager and a pretty cool kid. He likes hip-artists like Jay-Z and Eminem. He likes skateboarding, video games, jamming out on his guitar, and chilling with his girlfriend. But there is something else that Caleb finds cool, his Judaism.  He is proud of his heritage, proud that he was born in Israel, and proud that he lives in a country where he could express himself and his Judaism.

Two weeks ago, Caleb made the decision to begin wearing his large woolen kippah (the Jewish head covering that is customarily worn by some Jews during prayer and others throughout the day) to Northwood High School, a public school in Silver Spring, Maryland. He was expressing to his world that he is connecting with his roots and trying to discover that very important part of himself.

The school administration told Caleb to remove the kippah and doubted that he was Jewish.

It didn’t matter to him whether or not his friends would give him a hard time. It didn’t matter to him that the school administration challenged him and doubted whether he was in fact Jewish. When the school administration told Caleb to remove the kippah, Caleb refused, saying that he wore it because he is Jewish. The school then questioned his parent’s claim of their Judaism, going so far as to requiring a note from a local Rabbi.

Less than a week after I sent the letter to Principal Henry Johnson verifying that the Tanenbaums are indeed a Jewish family who frequently attend services as Aish DC, the onslaught of bad press and hate mail to the school forced them to issue a public apology to the family and to change their policy to become more tolerant of kids like Caleb, kids who are proud to express their beliefs in school.

It’s unfortunate that there aren’t more young Jews like Caleb, who view their Judaism as something to be proud of. For so many, they haven’t been properly exposed to the sweetness of their heritage. They haven’t been shown how the teachings and practices of Judaism are as relevant and useful today as they have ever been and that, whether or not one wishes to take on the full gamut of Jewish observance, Jewish tradition is overflowing with values and messages of personal development and self growth.

For too many young Jews, their only impressions of Jewish life give them the misconception that Judaism is archaic, ritualistic and boring. Daydreaming through services on Yom Kippur, when the only sound more painful than the cantor chanting songs in a language they don’t understand is the sound of their hungry stomachs begging to be fed, is certainly not a great way to introduce a young person to their religion. Yet for some Jews it’s all they grow up with! Being forced to attend Hebrew School 2 or 3 times a week while their friends are chilling out, is definitely not going to make Judaism seem very cool, yet this has become the standard negative association to Judaism for a large percentage of young Jews in America today.  For a religion that traces itself back over 3000 years, I would like to believe that we’ve probably used some better branding techniques in the past, if we are still here to be talking about it.

If I can’t show my students that Judaism is even more relevant than Glee, how can I expect them to fall in love with it?

As the director of a branch of Aish HaTorah, a Jewish Learning center with a mission to educate Jews about their heritage and ignite a love for Judaism, I remind myself before every class, every meeting, and every service that we offer, that our generation thirsts to be spoken to and connected with, in the most honest, direct and personal way possible. They like MTV and reality shows that reflect their own lives. They like Glee because the characters struggle with the same issues that we all do. They like Lady Gaga because she portrays herself as a rebellious misfit who is madly in love with her fans, whom she affectionately refers to as her “little monsters”, and just wants to help them discover their inner craziness.

I remind myself every day that if I can’t show my students that their Judaism can speak to them in a way that is even more relevant and even more personal than MTV, Glee, or Lady Gaga, then how can I possibly expect them to fall in love with it? And if the next generation of Jews don’t see that the stories in the Bible contain lessons that are timeless and relevant, and that the Biblical personalities struggled the very same struggles we face today, than how can we expect there to be more kids like Caleb Tanenbaum who will view their Judaism as cool and wear their Jewish headgear with pride?