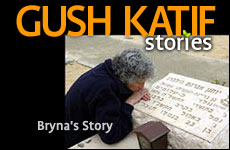 Trying to create miracles amidst the pain.

This 3-part series presents personal profiles of Jewish residents of Gush Katif, portaying the human dimension behind the politics.

When the disengagement takes place, the Hilburgs' most wrenching loss will not be their beautiful home in the settlement of Netzer Hazani, nor even their nine and a half dunams of hothouses that grow bio-organic cherry tomatoes. The hardest piece of land for them to part with will be the grave of their son Yochanan, killed in Lebanon while serving in the Israeli army, and buried in the cemetery of Gush Katif.

Sammy and Bryna Hilburg were newlyweds filled with Zionist idealism when they made aliyah from the United States in 1972. Sammy served in the Border Police; Bryna was a speech therapist. Seven years later they decided that it was not enough to live in the Land of Israel, they wanted to build up the land. This was an era in Israeli society when the term "settler" meant "pioneer" rather than "usurper."

The Hilburgs went to the government, who offered them a choice between the Golan Heights and Gush Katif. "In the Golan Heights, they were willing to give us cows and snow," Mrs. Hilburg remembers. "Since I didn't want either, we came to heat and tomatoes."

They moved to the settlement of Netzer Hazani in 1979. It had been founded just three years before. At the groundbreaking ceremony Yitzhak Rabin had proclaimed: "Today is a great day for the country and for the settlements, a day that symbolizes the strengthening of our holding in the area that has become an indivisible part of the state and its security."

When the Hilburgs planted their life in Gush Katif, did they ever consider the possibility that someday they might be uprooted? "No," answers the 54-year-old Mrs. Hilburg. "At that time nobody spoke about giving up land. We lived here, the Arabs lived there, and everybody was happy. We used to do all of our shopping in Khan Yunis [a large Arab city in the Southern Gaza Strip]. If we needed a coat of paint on the walls, we went to Khan Yunis to buy the paint. If we needed a kilo of apples, we went to Khan Yunis. When we had weddings and Bar Mitzvahs, we invited our Arab workers, and when they had weddings and festive occasions, they invited us. We, the Jews living in Gaza, built up an Arab middle class here. It hadn't existed before."

All that changed in 1986, with the first intifada. The Arab family that worked for the Hilburgs still works for them, but for Jews to venture into an Arab town or village could cost them their lives.

Gush Katif has been the target of 6,000 mortar shells and Katusha rockets fired from the nearby areas of the Palestinian Authority.

During the last two years, the communities of Gush Katif have been the target of 6,000 mortar shells and Katusha rockets fired from the nearby areas of the Palestinian Authority. Miraculously, all but a couple dozen have hit without causing injury or property damage. Two mortar shells have fallen close to the Hilburg home, but Mrs. Hilberg avers that fear plays no part in her life. This is remarkable considering that two of her remaining five children are presently serving in the Israeli army.

Bryna Hilburg, with her silver-gray hair, dressed in black slacks and a gray shirt, speaks in a flat, emotionless tone of voice, like a woman whose mind has taken over the functioning of her wounded heart. She is a portrait of rationality and mature practicality. Now, six weeks before the scheduled evacuation, has she made any preparations for leaving?

"No," she answers simply. "We've spoken to a lawyer. Most people here have spoken to lawyers. But as far as moving vans or packing, I don't even have a single box."

Sammy Hilburg is 56 years old, past the energy and enthusiasm necessary to start a new farm from scratch. Have they thought about where they'd go?

"Well, there's talk about sending people from Gush Katif to the area of Nitzanim [the area north of Ashkelon]. But as far as actually going there and saying, 'I want this trailer or that trailer,' nobody I know has done that. They forgot one little bitty thing when they started making all these preparations for Nitzanim for 350 trailers where they're going to put 1,800 families. They forgot to worry about the sewage. I don't want to go to a place where I can't even flush the toilet."

Is she expecting a miracle to stop the disengagement?

She sighs. "To a certain extent, yes. But if I want a miracle to happen, I have to make it happen. I have to protest and give newspaper interviews and wake up the country.

Could this eminently practical woman really conceive of 9,000 Jews continuing to live surrounded by a million and half Arabs? "Why not?" she replies. "Jews live everywhere, and they're always the minority. If the Arabs wanted to maintain living peacefully, there's no reason why not.

"The Islamic mentality," she continues, "is such that every piece of land that they consider theirs is completely and totally holy unto them. Therefore, they're not going to stop with the Gaza Strip. And if they get the West Bank, they're not going to stop with that either. They're going to want Jerusalem, and once they get Jerusalem, they might as well take Tel Aviv and Haifa. I think it's crazy to appease them with gifts of land, because it can't work. You don't give up something without getting something in return. As far as I can see, we're not getting anything."

THEIR MOST PRECIOUS POSSESSION

The Hilburgs' house is a typical middle-class, middle-aged home, filled with pictures and books and personal mementoes. The evacuation plan expects that soldiers will pack up the belongings of residents who refuse to pack up their own things, which will inevitably lead to much confusion and loss. A woman who knows what real loss is, Mrs. Hilburg is not worried about the prospect of losing her possessions. "Most of my belongings are really not worth very much," she shrugs. "If I have some things that I really care about, I'll put them in a suitcase, I suppose."

"What do you stand to lose?"

"My livelihood. My home. My understanding of life as it is. My friends. A safe haven for my children. And -- ," she pauses, "my son's grave."

The graves are one of the most heartbreaking issues of the disengagement.

The news a few days before has reported that the families whose 48 loved ones are buried in the Gush Katif cemetery have brought a suit in the Supreme Court insisting that the graves not be moved without their permission. Since it is unthinkable that the graves be left behind to be vandalized by the Palestinians, what exactly do the families want?

"First of all, the government has to come and talk to us, and not, as originally planned, come and dig up the graves in the middle of the night and rebury them in some temporary gravesite, and then say, 'You can do with them what you want.'"

The graves are one of the most heartbreaking issues of the disengagement. Jews are protective of Jewish graves because disturbing mortal remains is believed to inflict spiritual pain on the soul. Since bodies in Israel are not buried in coffins but merely wrapped in prayer shawls or sheets (to facilitate the process of "dust returning to dust"), exhuming the 48 graves of Gush Katif will not be a neat process of digging up and reburying coffins. Instead, it will entail the ghoulish ordeal of digging up skeletons with no definite delineation between the remains and the surrounding earth.

At what point does the price of living out her ideals become too great for Bryna Hilburg to pay?

Click here to read the first and second parts of this series.

1. Avital and Natan Sharansky have started a short term emergency fund for families who have been evacuated from Gush Katif. They are evaluating each case carefully and would like to have funds available in an account so that they can give funds to these people who are currently in crisis as soon as possible to help them with their immediate needs. Thus far they have helped families having weddings in the coming weeks and several other short term emergency needs. There are many families with serious needs.
Checks can be made out to Avital Sharansky and mailed to:
Avital and Natan Sharansky
c/o Richard Kovler
Rechov Mishmar Ha'am 1/4
Jerusalem 93226
Israel
Questions or further information can be obtained from Richard Kovler who works closely with the Sharanskys at richkov@netvision.net.il


2. An organization called Lemaan Achai -Emergency Campaign for Gush Katif- is trying to be the coordinating body of all those interested in helping. One can call 1-700-501-300 to donate items, services or to volunteer one's time. People willing to donate funds are being asked to call 1-800-351-012 and to specify that the money is for Keren Lemaan Achai. Israeli tax deductible receipts will be issued through an organization called Paamonim.

3. United States donors of funds can give money with US tax deductible receipts through All4israel via their website www.All4israel.org or by contacting Zalman@all4israel.org.

Signs of the Times
Saadiah Gaon, Rashi and Maimonides: How Three Rabbis Revolutionized Judaism
King Sennacherib and the Siege of Lachish
Three Small and Easy Changes to Add Positivity in Your Home
Comments