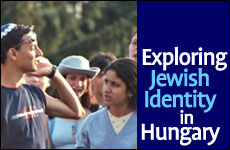 This past summer I was part of an inter-denominational group of Jewish teenagers who traveled to Hungary as part of a program called the Szarvas Fellowships. This is a program for exceptional American Jewish teenagers and it has four main goals: to allow teenage Jews to explore our Jewish identities, to deepen our knowledge of our European Jewish heritage, to discover our place in world Jewry, and to promote international Jewish unity by interacting with other Jewish teenagers from all over the world.

The following is a letter I wrote to my mother on the flight coming home from Camp Szarvas.

Right now I am on the plane from Hungary to JFK and I thought that I'd write to you and tell you about the highlights of the trip. Firstly, our American group is primarily from Teaneck and NYC. A lot of them are Modern-Orthodox and they don't have any non-Jewish friends. When I first heard about this, I didn't understand. No non-Jewish friends? To me, this seemed so weird! But it wasn't just that. My new friends patiently explained to me that all of their lives they had attended Jewish schools. (Jealousy -- if only I could have been so lucky!) They lived in sheltered and religious communities. Not knowing non-Jews was a circumstance, not a choice.

A big part of the American program was sharing our personal Jewish identities. For several meeting sessions throughout camp, each of us in our group took turns discussing what it means to be Jewish and how our lives are influenced by that. During my turn I explained that I find purpose and meaning in Jewish rituals because doing them connects me to all Jews everywhere, which is something quite powerful since there aren't many Jews walking around downtown Spokane.

For them, Judaism is a habit. For me, my Jewish identity has grown from adversity and from actively choosing to be different.

When we got to talking, the people who lived in secluded groups where it is so easy to be Jewish were actually a little jealous of me. They were jealous that I find such deep importance and meaning in keeping Shabbat and in keeping kosher. They grew up not questioning and not worrying about doing rituals. They never had to consider not going to a school barbeque because the meat wasn't kosher. They never had to choose between going to a debate tournament on Saturday or going to synagogue. For them, Judaism is a habit. For me, my Jewish identity has grown from adversity, from making a distinction, and from actively choosing to be different.

What separated me from the other Americans, however, connected me to those from Romania, Poland, Hungary and Russia. When I joined USY and I began to meet Jews from all over the country, I was amazed to learn about the places where Jewish resources are abundant. Places with Jewish Community Centers, Hebrew High Schools and kosher Chinese food restaurants, places where men wear kipot while eating hamburgers at kosher diners and places where women can study.

When I think about Szarvas, I recall an interaction I had with a group of girls from Kaliningrad. One of the girls asked us how many synagogues there were in New York. We guessed probably over 100. The girl's eyes got wide and she started talking to her friend excitedly in Russian. There is only one active synagogue in Kaliningrad.

There was a boy from Romania who was the only Jew in his high school. Sometimes he got picked on for being Jewish and his teachers did nothing about it. Some teens from Russia said that they would marry Jewish if they could, but it was extremely difficult to date Jews in their city; because the community is so small, the Jewish boys in their city seemed like brothers.

One story in particular taught me something very important. Sasha is 17 and he is from a city outside of Warsaw, Poland. His city, like so many others, was once a large Jewish center, but after the war was very much destroyed. Now the Jewish community is rebuilding. Sasha told us about living as a teen in Poland, about experiencing anti-Semitism, and about his love of Szarvas. He told us about one of his biggest annoyances: "When Israeli and American Jews come to Poland, they always ask 'why do you stay here? Why do you live here where it is so hard to be Jewish?'"

For Sasha, his Jewish identity is defined by the sense of duty to his Jewish community in Poland.

Sasha stressed to us that he stays in Poland because that is where he is needed. He doesn't want to move to Israel or New York, places where being Jewish is easy, because for him his Jewish identity is defined by the sense of duty to his Jewish community in Poland. "I wish that when people come to see the [concentration] camps that they would also come and see the Jewish culture that is still here in Poland and throughout Europe." For him, Judaism is so much about life, just as much as it is about remembering the past. He taught me that the places where it is hardest to be Jewish are the places that often need strong, educated Jews the most.

There were so many inspiring people with familiar stories! One day I met the Romanian counselor, Anda. I loved talking with her because she, in addition to being very intelligent and kind, really understood me. I couldn't figure out our connection until one of the last days of camp. I had asked her if she had ever been to America and she told me that a few years ago she realized that she could make her hobby of Jewish teaching a real job, and so she spent two years in New York learning at a seminary. Now she works in Bucharest as an education director. In my Synagogue at home I work very closely with our education director, organizing our intensive B'nai Mitzvah program and teaching Sunday School. I love Jewish Education, and I aspire to get a degree in this field. Anda is a huge role model for the girls and women in her community. She's a huge role model for me. All of this, and she looks no older than 25.

When I think about this trip, I feel like I've gotten the complete Jewish experience. I prayed with a mechitza (divider), gave a d'var Torah on Shabbat and had debates about egalitarianism. I danced to and sung Jewish songs with people who didn't know a word of English, yet we understood each other completely. I made friends from Budapest, Bucharest and Boston. I looked at myself by looking at others.

From Nigeria, with Admiration and Love

Why Hope?
The Promise Of The Land
Which Chat Are You On?: Parshas Behar/Lag Ba’Omer
Do You Like Slow-Cooked Food? Thank the Jews
Comments
MOST POPULAR IN Jewish Society
Our privacy policy