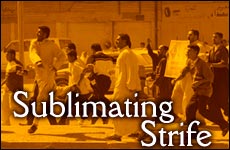 The fighting in Fallujah may have deep biblical roots

Hershel Shanks, editor emeritus of Moment Magazine, recently raised the tantalizing possibility that the Iraqi city of Fallujah may be identical to the Babylonian Talmudic center known as Pumbeditha.

Citing a 19th century scholar, Jacob Obermeyer, he suggests that the two names (by way of the Syriac rendering, Pallughtha) are linguistic equivalents. Babylonia, of course, overlaps largely with contemporary Iraq, and Pumbeditha in fact lay on the banks of the Euphrates River, as does Fallujah.

Pumbeditha was for centuries a center of Jewish religious/intellectual activity. It hosted one of the major academies when the Babylonian Talmud was completed at the beginning of the 6th century of the common era, and continued to be a center of Jewish study throughout most of what is known as the Geonic period.

Today Fallujah is widely considered one of the most violence-prone areas in Iraq. A hotbed of Wahabi tribal emotions, it has a long history of bloodshed, and it was there that four American contractors were brutally murdered earlier this year. Not a pretty or peaceful place. Even its Syriac name, Pallughtha, implies strife; while some see the word refering to a "split" there in the river's flow in ancient times, it can just as easily be translated as "dispute."

Yet, if Fallujah is indeed Pumbeditha, it certainly seems to have been quite hospitable to Jews -- as was Babylonia in general -- 1500 years ago. It was there, and in other Babylonian cities like Sura and Neherda'ah, that Jewish scholars recorded much of the Oral Law that Jews had studied and transmitted from generation to generation since Biblical times; and there where subtle points of the Torah's law were studied and taught, examined, contemplated and debated.

The famed psychiatrist Carl Jung put forth the intriguing idea that places have power, that lands have effects on their inhabitants. "The soil of every country," he wrote in Civilization in Transition (1918), "holds some such mystery... just as there is a relationship between mind to body, so there is a relationship of body to earth."

Whatever the merit of Jung's notion, Babylonia's conflict-roots do in fact run deep. One of the Torah's first narratives is about the Tower of Bavel, identified with the capital of what would become Babylonia. When, in early human history, the populace there joined to build a structure whose top would "reach to the heavens" in order to "make for ourselves a name" -- to in some way challenge the Creator, as the rabbinic commentaries explain -- seeds of discord were divinely sown among them, in the form of different languages, and the diverse perceptions of things they reflect. The people, until then unified in their undertaking, came to disagree, to argue, to fight, and eventually to disperse to lands far and wide.

Could Jung have been right? Might Babylonia, so deeply unsettled a place to this day, have some power to evoke fractiousness?

If so, it is interesting that when Jews made Babylonia their home, they too engaged in disputes - holy, sublime ones, over the fine points of Jewish religious law. Such discussion is even referred to in rabbinic literature as "milchamta shel Torah" - "the war of Torah."

In fact, that is precisely what goes on in every contemporary yeshiva beit medrash, or study hall. The din in such places can be overwhelming, as students lock mental horns, fighting to the finish with their minds. When it is time for lunch, though, the battle ceases, and the disputants resemble the amiable partners they were all along; their "fighting" was never personal but rather a joint venture in the cause of a higher truth. As the Talmud puts it: "[Torah scholars] become like enemies to one another [when they engage in dialectic] but then become beloved friends" (Kiddushin, 30b).

It has been suggested that the effect of the Jewish people on history has been to tame the barbarism that is part of the human condition, that Judaism has helped to civilize the world. No less a thinker about Jews, and barbarian, than Hitler captured it well when he expressed contempt for what he characterized as the "effeminate ethics" of the Jew.

Perhaps the ancient Jewish academies in Babylonia were a reflection of that very civilizing effect, of how true holiness can mediate, sublimate, strife.

I Am Not My Disability

Submitting Your Annual Report
The Promise Of The Land
Which Chat Are You On?: Parshas Behar/Lag Ba’Omer
Do You Like Slow-Cooked Food? Thank the Jews
Comments
MOST POPULAR IN Society
Our privacy policy