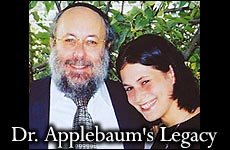 15 North American doctors moved to Israel with their families to carry on the legacy of Dr. David Applebaum.

The last of a special group of 15 North American doctors -- the Applebaum Fellows -- among them ER specialists, cardiologists, pediatricians, a plastic surgeon and a dermatologist, moved to Israel with their families last week to carry on the legacy of Dr. David Applebaum.

On the eve of September 9, 2003 the world of medicine lost one of its most dedicated leaders, when Applebaum, the director of Emergency Services at Jerusalem's Sha'are Zedek Hospital, and his 20-year-old daughter Nava were among seven people murdered by a suicide bomber who detonated himself at the door of Jerusalem's Cafe Hillel on Emek Refaim.

In response to the tragic event, Jerusalem-based venture capital fund Israel Seed, Nefesh B'Nefesh , an aid organization for North American immigrants to Israel, and the United Israel Appeal of Canada (UIAC) raised $250,000 from private donors to create the Applebaum Fellowship campaign to help doctors from North America immigrate to Israel.

"The death of Doctor and Nava Applebaum was such a terrible tragedy. They were both such angels of good in this world," Israel Seed partner Michel Eizenberg told ISRAEL21c. "When the period of mourning was over, there needed to be an appropriate response and we thought the best tribute to the memory of Dr. Applebaum would be to bring more Emergency Room doctors to Israel.

"It is our hope that they will carry on Dr. Applebaum's legacy. The best response to terror is to bring loving kindness and caring into this world and I hope that is what these people will do," adds Eizenberg.

The 15 doctors and their families -- who on average received a grant of $18,000 -- have been arriving throughout the summer. The group became complete last week when the last of them arrived in Israel, and were greeted at the airport for a festive ceremony in the presence of Health Minister Dan Naveh.

"Dr. Applebaum was an incredible human being and to live a life like his should be the goal of every Jew."

"For as long as I can remember, my dream in life has been to practice medicine in Israel," Dr. Jeremy (Moshe) Halberstadt told ISRAEL21c. Halberstadt, an ER pediatrician from New York, w arrived to Israel with his wife and five children on the first specially chartered Nefesh B'Nefesh flight on July 14. "Dr. Applebaum was an incredible human being and to live a life like his should be the goal of every Jew."

For Halberstadt, it is Applebaum's example of bridging the gap between Torah and medical scholarship that serves as his greatest source of admiration. "He was dedicated to Torah study and scholarship and at the same time, he was a world-class physician," says Halberstadt. "His ability to combine those two worlds is something that I can aspire to."

"I think bringing us here is an appropriate gesture, in terms of responding to the terrible act that took Dr. Applebaum's life," he adds. "If the idea of terrorism is to drive people away from Israel, Israel is where we should come."

Applebaum, who was born in Detroit, Michigan and moved to Israel from Cleveland, Ohio in 1981, was known not only for being the first respondent on the scene of terror attacks, but also for being a great equalizer of patients -- terrorist and terror victim alike.

According to AMA member Dr. Joel Martin Geiderman -- a Beverly Hills, California, emergency medicine physician who met Applebaum while collaborating on the construction of a new wing at Sha'are Zedek -- "he was passionately committed to his patients and took a lot of pride in the fact that he was treating Arabs and Israeli at his hospital, regardless of national background or religion."

"When those murdered include physicians such as Dr. David Applebaum, a tragic irony magnifies an already profound sense of professional loss," he said in an interview conducted immediately after Applebaum was killed. "A man dedicated to mitigating the suffering attendant to violent acts of terrorism is swept away from all of us by just such an act."

Halberstadt is resolute to carry on the late doctor's neutral approach to providing medical care. "As a doctor, you are here to treat patients and my goal is to treat all patients equally," he says, explaining that during his period of residency at the Jamaica Hospital in Queens, New York, he never prioritized patients according to their personal circumstances, but rather ranked them according to the severity of their case. "But," he acknowledges, "treating a drug dealer or [a violent offender] is one thing; treating a person whose mission was to kill Jews, is quite another.

"Never having faced what Dr. Applebaum had to face, perhaps it is easy for me to say I would be impartial. I can't anticipate how I will react, but that is my goal."

Dr. Mitchel Benuck, a 34-year-old pediatrician from New Jersey who arrived to Israel with his wife and three children on the second Nefesh B'Nefesh flight on August 4, anticipates he will confront the same challenge.

"It's built into the Hippocratic Oath that those in the medical profession must treat people equally and provide care for all. Just as I have up until this point, I hope to be able to set aside personal political convictions and provide health care equally to all patients who come through my door," he says. "That being the case, I can certainly foresee personal tension [when it comes to the possibility of treating terrorists]. I hope we can all live here peacefully and that the question will not become a reality.

According to Benuck, the tough moral dilemma is not the only challenge facing doctors from America who intend to practice medicine in Israel. He points to the vast reduction in socio-economic status, the bureaucratic process of getting licensed in Israel and the challenge of learning Hebrew.

"A lot of my time is spent educating parents on how to care for their children. So, the language barrier is difficult to overcome," he admits. "But, I think there will be something especially satisfying about serving my brothers here in Israel. I'm really happy to be here and I really hope all of the Applebaum Fellows are successful at practicing medicine for the betterment of Israeli society.

"Dr. Applebaum is an incredible role model for all of us to have," he concludes. "To have a role model who contributed so much to the people of Israel and their health is a tough act to follow, but it's also a tremendous source of inspiration."

This article originally appeared on www.israel21c.com

Never Too Old to Learn

Birthright Buzz
Extras In Our Own Epic
Evolution 2.0: The Coming Darwinian Revolution
Chukat 5782: Let’s Play the Blame Game!
Comments
MOST POPULAR IN Israel
Our privacy policy