Who's Minding the Bus? 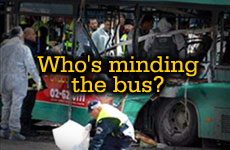 Re-examining the attitudes behind our security measures.

Two items on last night's Voice of Israel news sent a chill through every spine in Israel.

The first concerned yesterday's homicide bombing of the #14 bus, which killed eight Jews, including teenagers on their way to school, and wounded and maimed 35 others. A highly-touted solution to the bus bombings has been to station security guards on the buses. Within an hour of the latest carnage, a spokesman for Egged, Israel's bus company, announced that it is "simply impossible to post a security guard on every bus all the time." Later, the startling truth emerged: Two security guards, one after the other, had boarded the bus and checked it while the terrorist sat there with his bomb in a bag on his lap, and found nothing suspicious. The second guard, having executed his duty, hopped off the bus meters before it exploded into an orgy of fire, body parts, and blood.

Another solution to the threat of terrorism has been to post guards at the entrance to every cafe, restaurant, department store, supermarket, and transportation depot in Israel.
The news item which cast doubt over the efficacy of this measure concerned Maxim's, a popular Haifa restaurant, where 21 people, including whole families, were murdered by a female homicide bomber several months ago.

Yesterday an undercover policewoman, with a fake bomb belt strapped to her waist, approached Maxim's. She was checked by the security guard at the entrance, permitted to enter, and sailed her way into the midst of the crowded restaurant. Maxim's, the radio announced, has consequently been shut down for 30 days for "security violations."

If the security guards can't save us, who can?

If the security guards can't save us, who can? The very existence of the State of Israel, fighting a losing war with terrorism, hinges on the answer to this question.

"ONLY X CAN BRING PEACE"

Two years ago, with the Oslo War in full swing, hundreds of Israelis dead, and thousands wounded and maimed, the answer, according to many, was: Ariel Sharon. Banners strung across every major intersection in Israel proclaimed: "ONLY SHARON CAN BRING PEACE!"

This does not mean to trust in God and do nothing. The Torah demands that human beings exert maximum effort in the physical realm. We have the responsibility to do as much as reason dictates. Passivity is not trust in God; it's sheer carelessness.

At the same time, we must address the issue: "Who/what should we trust to save us?" It's our attitude, not necessarily our actions, that requires re-examination.

The second of the Ten Commandments enjoins: "You should have no other gods before Me." "Other gods" refers not only to idols of wood and stone. The Hebrew word for "other gods," --elohim aharim -- means "other powers." The Bible's message, over and over again, is: Don't trust in other powers. That includes:

Rather we must look to God to save us, because God alone is the ultimate causal force in the universe.

Now, the latest greatest savior from terrorism is being constructed: the security fence. With its state-of-the-art electronic detection system, impregnable construction, and razor-edged rim, the security fence will surely save us from the nefarious terrorists. Or will it?

Another verse from Psalms pops into my head: "Unless God builds the house, they who build it labor in vain." Does that apply to fences, too?

I am certainly not advocating that we cease our self-protective measures. I voted for Sharon, despite the campaign posters. I endorse stationing a guard at the entrance to every public place. I am a staunch advocate of the security fence.

But do I believe that any of the above will ultimately save us? Not on your life. Not on my life. Not on the lives of my children.

Only God. That is the sum and substance of Jewish monotheism. No other power, government, army, diplomatic process, military arsenal, security measure, or foreign nation can actually save us.

"ONLY GOD CAN BRING PEACE." How's that for a campaign slogan?

On the Scene of a Terror Attack

Life with Bullet Proof Vest
Don’t Believe in Other Gods Versus God is One
Seeing Without Eyes
Why Shouldn’t We Eat Whatever We Want?
Comments
MOST POPULAR IN Israel
Our privacy policy
Aish.com Is Looking for Great Writers