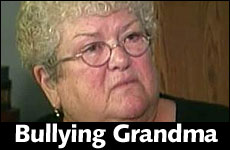 Karen Huff Klein teaches us a valuable lesson for The Three Weeks.

The taunts have gone viral.

Karen Huff Klein, 68, a school bus monitor, endures profanity and nasty insults from a group of seventh graders. You can watch it all online – the slurs have been viewed more than a million times. Caught on camera, one of the kids posted the vicious teasing on Facebook.

Students called Klein an elephant, said they would egg her house, and shouted unprintable slurs. They caused deep pain when one boy said, “You’re so ugly your kid should kill themselves.”

Allow me to share with you a personal memory. Growing up, I attended an all-girl’s yeshiva elementary school. There were not many private school children to service at that time so the district combined two other community schools onto one route. This meant that I shared the long bus ride home with middle school kids who attended the neighborhood coed schools.

For some reason, two boys on the bus spent their days taunting me. I remember sitting silently, sometimes holding back my tears, as they would mock my more religious school, my mode of dress, and especially the fact that I was a daughter of a rabbi and rebbetzen. They would use shocking curse words, throw lollypops in my hair, and laugh at me all the way home. As we would pass my father’s synagogue, they would up their nasty comments. The bus driver remained silent. I remember staring out the window, pretending not to hear them.

No one called it bullying then. But we all knew that it was mean and wrong.

I swallowed the insults, the mockery and the disgusting sticky lollipops tangled in my hair.

Why didn’t I say anything? The family of one of these boys was members of my parents’ synagogue. Though I was just a child of ten I realized the awful predicament I would be putting my parents in. I didn’t want to ask them to confront a member of their flock, forcing them to acknowledge their son’s gross misbehavior. I knew the daily difficulties my parents faced as they grappled with building up the synagogue and maintaining relationships with the member families.

Perhaps I should’ve discussed the bullying, but I did not. Instead I swallowed the insults, the mockery and the disgusting sticky lollipops tangled in my hair. And I made it through those years feeling confident in my parents’ love for me; incredibly proud of the mission they lived and the legacy they bequeathed. Those boys’ ugly behavior reeked of weakness to me. I made a promise never to be like them. Ever.

Related Article: Her Name was Patience

Though my story was painful, Karen Huff Klein’s story takes hurt to a whole new level. To humiliate a person in private is despicable but to post your nasty behavior publicly online declares that you have no shame. Once a child has no shame there is no telling how low he will fall. Lines have been crossed, awful words have been spoken, hearts have been broken and yet we have the audacity to post all this on You Tube? What does this say about our generation? Are we clueless to the pain we have caused?

There is of course no way for anyone to condone this behavior. Watching the children taunt Ms. Klein opens our eyes to humiliating scenes that once would have remained like garbage, left strewn on the bus. Of course we are outraged. But my question to you is this: In an age where bullying has been widely discussed, school programs implemented, front page news stories written, what makes this story stand out?

The behavior of these children must bring us to focus on the lack of respect between young children and the older generation. We have failed to raise our children to revere those who have come before them. The nasty retorts and smug attitude have become a normal mode of communication. And it is not a far leap to jump from outright disregard to vicious remarks and verbal abuse.

Now it is not only children bullying children, but there are too many kids bullying those who they are expected to respect – parents, grandparents, teachers, and bus drivers just to name a few.

We have failed to raise our children to revere those who have come before them.

Without thinking, kids make fun of their parents and grandparents. They ignore them when they walk into a room and push them away with biting and sarcastic comments.

“You don’t know what you’re talking about!”

“Who said you could touch my stuff?”

“Shut up already! Leave me alone! Who asked you?”

Teachers have spoken to me about being ignored, talked over, challenged, defiant backtalk and unheard of levels of disrespect.

Yes, it is wonderful that a fund has been established to send Karen Huff Klein on vacation. But that does not absolve us from the responsibility of teaching our children two great fundamentals of life:

Your words have the power to build -- and destroy. And when you post these words online or forward nasty text messages, you will cause a tsunami of pain.

Secondly, cherish and respect the generation above you. They have lived long years, overcome great obstacles, discovered wisdom, and created a path for you.

We are now entering one of the saddest periods in the Jewish calendar. The Three Weeks culminate in the sorrowful day of Tisha B’Av, the day our holy temple was destroyed. We are asked to take time for introspection. We are compelled to ask ourselves ‘why’? Why was our Temple burned, our people sent into bitter exile, and our nation left to mourn until today?

The answer is chilling. We have suffered because of sinat chinam, hatred between brothers for no cause, no reason. We perpetuate the hatred through an unkind word, a nasty dig, malicious gossip, an insensitive comment, even rolling our eyes at someone-all little moments that seem like a blip in the big picture we call life. “What’s the big deal?” we ask. “It’s just a word, it’s only a gesture. Stop being so sensitive!”

But these are the sparks that grew into a flame of hatred between brothers. This is the fire that burned our temple and caused us to wander from land to land. The embers are still burning today. We are consumed by hatred and destroy each other through words.

Each of us has the power to build and create a world filled with love.

We are still battling this war between brothers. Let us resolve to stop the hatred once and for all. Parents are responsible to teach their children to understand the power of their words. Nasty retorts and bullying must not be acceptable. Husbands and wives, brothers and sisters, children and parents, friends and coworkers, even strangers who encounter each other in the street-we all need to take a moment and realize how much pain our little comments have caused. We tear each other apart.

Enough! Each of us has the power to build and create a world filled with love. We must realize that it is not the grand gestures but rather a single word, a sweet smile, a positive remark that will help rebuild our temple and bring our people home.

One day we will look back at this time. How painful it is to live with regrets for hurts we have caused and people we have wounded.

Selling Your Soul
Olivia Newton John’s Grandfather was a Nobel-Prize Winning Jewish Physicist
Don’t Believe in Other Gods Versus God is One
Seeing Without Eyes
Comments
MOST POPULAR IN Current Issues
Our privacy policy
Aish.com Is Looking for Great Writers