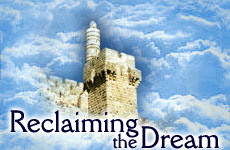 After Ariella was wounded in a terrorist attack in Jerusalem, she and her parents took the next logical step: they moved to Israel.

Ariella Feinstein sits across from me, eyes wide open, listening intently to my questions. Her mother, Alice fidgets uneasily, reliving in her mind her daughter's ordeal.

On December 1 2001, Ariella was walking with a friend on Jerusalem's crowded Ben Yehuda Street, a pedestrian mall in the center of Jerusalem. Ariella was returning home from a dinner with a friend at about 11:30 pm. As she passed by a frozen yoghurt shop near Café Rimon, she was struck by a blinding explosion. "It felt like buildings were falling on all sides of me…I didn't think I had survived!" Ariella opened her eyes to see a world of devastation around her. And then she started running as if her life depended on it.

Ariella didn't know she was injured until someone stopped her and touched her face. She felt blood dripping from her face. She looked down to see her new skirt littered with holes, some of which had penetrated her leg.

When Ariella's family in Los Angeles heard that she was wounded in a terrorist attack, her father, Charlie Feinstein, gathered the local Jewish community together to pray for his daughter.

The family received a flood of calls all night from care workers in Israel. The doctor, surgeon and social worker all called them personally.

News eventually came through that Ariella's wounds were "only superficial" -- nuts and bolts in her legs and face. But that night 11 people, aged 14-21, were killed and 188 injured. Hamas claimed responsibility for the attack that was detonated by two suicide bombers.

Ariella considers herself blessed with the gift of life. "I experienced a spiritual epiphany that changed me forever in so many different ways that I can't even begin to describe. Before, I was just sailing through life. This was a big knock."

The moment the bomb went off, she felt more scared and alone than she had ever felt in her entire life. "I didn't know if I would live or die. I was terrified of being by myself. People were scrambling to escape the area. Seconds later I had real clarity that I was not alone. God's comforting presence was all around me. I felt an inner peace and lost the nagging doubt.

"The bomb was a big wake up call for me."

"From that moment on, I realized that God personally intervened and saved my life. The bomb was a big wake up call for me. I realized how short and precious life is and consequently, I felt an intense sense of responsibility to use my life appropriately. I made a genuine commitment to be kind to everyone around me."

This life-changing experience also infused Ariella with an unwavering love of Israel. She is determined to use her gift of life to help the Jewish people and make a difference in the world. "I have been given a chance to do something positive with my life, and I hope I will have the strength and the clarity to do what God expects of me. I want to make a contribution to the Jewish people. The effects of that experience have become a constant part of my consciousness. It affects everything I do, hopefully for the good."

The bomb made her parents, Charles and Alice Feinstein, more determined to get to Israel than ever before. From the moment the bomb went off and throughout Ariella's recuperation, the outpouring of love and care from Israelis reminded them that Israel was their real home. Their desire to move to Jerusalem, a plan they once had, was re-ignited.

Alice Feinstein describes the attacks on Israel as the result of "a dramatic rise in anti-Semitism all over the world. People don't understand that Israel just wants to survive. My parents grew up with the Holocaust. Now it seems as if the world is rising up against the Jews, which defies logic. It's the same pattern of hate repeated. All we can do as people of the book is to embrace the privilege of being Jews, do chesed and bring goodness into the world."

The Israeli government paid for all of Ariella's medical care and Alice Feinstein's round-trip ticket to see her daughter, including hotel bill, cabs, and meals. "The Israeli government did everything they could to make my trip was as easy as possible. It was something special! You wouldn't get that in the U.S. Here you are surrounded by friends and family." She was flooded with support from Israeli society. When Ariella was released from the hospital, she stayed with old family friends in Jerusalem's Old City. She describes this time as living under the "clouds of glory," for she was treated with such tenderness. Alice called her husband, exclaiming, "I'm not coming back… Quit your job, pack your bags…we're coming home!" She couldn't think of being anywhere else.

Ariella was seven years old when Israel first touched her soul. That was 14 years ago when the Feinstein family packed up their home in Long Beach California, rented it out, and spent a year in the Old City of Jerusalem. Alice describes their experience as the best year of their lives, a year that dramatically changed the whole family. "From that moment on, we fell in love with Israel, and planned to return as soon as we could." Since then they have made countless trips back and forth. "In our mind we were coming back and we were always in Israel spiritually."

As a result of the terror attack, Ariella, who is presently studying in a women's seminary in Jerusalem, is determined to stay in Israel. She is filled with a passion to make a contribution and rebuild Israel as she waits for her parents to make their permanent move.

"There is no beauty like that of Jerusalem. This is where I feel I'm at home. I know that I'll never be able to repay all the people who helped me and gave me strength while I was recovering. But I hope I will have the opportunity to help others in a similar way."

Dedicated to Shifra and Allan Hayman who lost their only daughter, pregnant with her first child, just a few months earlier in the Sbarro bombing.

Unstuck: The Aliyah Chronicles
In the Shadow of David and Goliath
Where Do the Laws of Nature Come From?
Saadiah Gaon, Rashi and Maimonides: How Three Rabbis Revolutionized Judaism
Comments