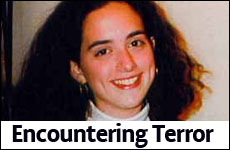 If I turn my back on Israel, I am the one defeated.

The Sinai desert is silent at night. All around me, an expanse of rolling sand tipped with silver moonlight. I trod through the uneven landscape with a small group of tourists, young professionals like me, led by our Israeli tour guide, Natan.

When he asked a few of us to go for a walk with him, I surprised myself by agreeing. It was the same surprise I’d felt a few months ago when I signed up for this birthright Israel trip. What was I thinking? Hadn’t I sworn to myself ten years ago that I would never come back to Israel?

“We’re almost there,” Natan whispers, leading us up a steep slope. We haven’t walked far from the camp, but I’m tired from pushing through the sand. Still, I follow him, the desire to see where he is leading us more insistent than the burning in my leg muscles. As I reach the top of the slope, I look down into a deep valley, shaped in a perfect circle.

Natan advises us to join hands with a partner. “You’ll need help.”

Her thick, dark curls remind me of Alisa Flatow.

With every step we have to steady ourselves; the ground beneath us is constantly shifting. I hold steady to my partner, a grad student in Anthropology, keeping my balance by focusing on the bandana tied around her hair. Her thick, dark curls remind me of Alisa Flatow.

It’s that hair I think of when I remember Alisa, and her deep dimples when she smiled. I was good friends with her younger sister, Ilana, but I always admired Alisa from afar, with the floppy bows she wore in her hair, the bright leggings under her skirts. Even her glasses, big frames over her wide brown eyes, seemed the height of fashion. Whenever I came to their house, she always had a smile for me before zipping off to a party or a Shabbaton or an outing with a friend, a duffel bag slung over her shoulder. When I’m in high school, I would think to myself, I want to be just like that.

My family had been close with the Flatows for years. There were countless play dates and sleepovers, and even a trip together to the Concord for Thanksgiving.

When my family decided to go to Israel for Passover, it was natural that Alisa, who was in Israel for a year of study, would come stay with us for the Seders.

Related Article: The Spirit of Alisa

When we arrived at our hotel in Jerusalem, my parents went to the concierge to arrange for an extra cot for Alisa. At the desk, Mom’s eyes fell on the front page of a newspaper, where the picture of a young girl’s face, oddly familiar, caught her attention. Mom picked it up and gasped when she saw the picture up close: it was Alisa. A terrorist had blown up a bus in the south of Israel, killing Alisa and seven Israeli soldiers.

All I could feel was fear, so thick it choked me.

After my parents composed themselves, they told us what had happened. When the initial shock subsided, all I could feel was fear, so thick it choked me. I had grown up a suburban Jewish girl with a private-school education. I lived in a big house on a hill in a neighborhood of other big houses. Sometimes, we didn't even lock our front door. I was 14. I had heard of terrorism, just as I had heard of anti-Semitism and the many other devastations that had befallen the Jewish people throughout history, but it had only been a theory. Now it was the only reality I could see.

When my parents called the Flatows, they told us not to leave. “Alisa would have wanted you to stay.”

So we stayed. But the rest of the trip was saturated with melancholy, and for me, a palpable terror of something happening to us everywhere we went. Even the start of a car engine made me jump. I willed every day to go quickly and was overjoyed when we finally boarded the plane to go home.

As I watched Ben Gurion airport fade into a speck beneath me, I promised myself I would never return.

So a decade later, I’m mystified to find myself in the mouth of this desert valley, cupped by moonlight and waves of sand. I’d been looking for inspiration all over the globe, but never once had I allowed myself to consider that I’d find it in Israel. I knew people who had come here and left inspired – some even stayed! – but I was skeptical; who has time for inspiration when you’re busy running from katyusha rockets? It was as if another person had taken my hand and signed me up for this trip, packed my suitcase and strode confidently through the airport, passport in hand, while I tried to wrestle her back into the taxi and head home.

I take in the night sky above me. The stars, thousands of them, are vividly displayed above us, bright as daylight, framed by a ring of moonlight meeting earth.

“See those stars?” Natan asks us. “Those are the same stars your ancestors looked at three thousand years ago.”

His words echo through me, sparking recognition of something long forgotten. I look up at the sky, drinking in every detail.

In this hidden corner of the desert, there is no trace of the Israel I left behind ten years ago. The fear is gone, replaced with the sense that I am steeped in history, and bringing my latest chapter to life. The tragedies of the past are not separate from me, nor do the triumphs against the most impossible odds belong to obscure shadows of the past. Every moment of that history is mine.

I think of Alisa, who loved this country, and her family, who in the wake of her death encouraged us to stay. We have always had enemies here; it is part of our story. But if I choose to turn my back on this country, I am the one defeated. This land is a part of me, as impossible to shake off as my own skin. I have tried to run from the past, but it has called me back. Now I find myself where it began.

It Hurts to Part from You
The Blue Beyond
Great Place to Live
Is Eating Supposed To Be Spiritual?
Comments
MOST POPULAR IN Israel
Our privacy policy