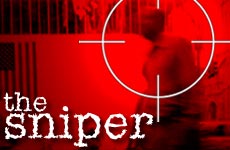 As a face appeared in the crosshairs, the DC sniper took aim at a whole world.

I grew up in Manhattan where walking on the crime-ridden streets meant a constant vigilance of the alleys and shadows. I then spent over 25 years in Israel, with the on and off periods of terror bombings and stabbings. And now I live in "safe" suburban Washington where one sniper had gripped our lives with fear. Compared to the other frightening situations I've lived in, you'd think this kind of terror would have been somewhat "minor." In some ways, it has been the most terrifying of them all.

A single shot rings out, one person collapses to the ground, and the entire DC area is frozen with fear and horror. Yet, cold logic finds it hard to identify the factor that maked these attacks so traumatic when we are surrounded by so much tragedy and devastation.

One bombing kills more people than all the sniper's forays put together.

For starters, car accidents claim many more lives on any day. Secondly, the world abounds with wars and killings galore. One bombing kills more people than all the sniper's forays put together. Yet for some reason, the emotional impact of seeing a picture of the latest victim and reading about his or her life affected us more profoundly. And it's not only because it's hitting closer to home. People who live nowhere near the Washington area also felt this acute reaction.

The Jewish sages give us a profound insight to understand this phenomenon. All of the creatures created in Genesis are described in plural, i.e. God created animals, cattle, etc. Yet only man is created alone, even without his spouse. Why was man created alone? To teach us that he who saves one person is as if he saved an entire world.

At first glance this rabbinic statement seems to merely state that killing one person is “numerically” equivalent to killing a world full of people -- as if killing a single person is quantitatively multiplied by all the generations to come -- just as all of humanity descended from Adam.

This faulty explanation conveys the feeling that human life can be measured and multiplied on a calculator. The sages must mean something deeper.

In describing man as being created alone, the rabbis are pointing out the quality of a human being. They are in effect telling us: Look at the world of humans around us -- the intelligence, the creativity, the kindness, the courage, and the sacrifice. These are not different strains of people; rather each person contains all of these attributes. If the whole world descended from one person, then he must have had all these characteristics and talents. And each of us as well is the sum total of all of his descendants. Any talent or attribute that surfaces later is perforce included in the predecessor. Therefore, killing a person is not the mere destruction of one cog in a 6-billion-piece machine, but the destruction of an entire microcosmic world.

Much has been said about numbers numbing our minds. “One killing is a tragedy; a thousand deaths is a statistic.” This expresses the very real psychological inability to cope emotionally with an overwhelming tragedy. The real issue, however, is that the minute we add two people together, we have misdefined the human being. Humans are entire universes on their own, and cannot be quantified.

There is an extraordinary comment of the Ibn Ezra, a 12th century classic commentary on the Bible. He describes the difference in Hebrew between a proper noun and a common noun. A common noun can take on a suffix denoting possessiveness (i.e. Jim's car), or the plural (cars), or the definite article (i.e. the car).

A proper noun, however, cannot do any of the above in Hebrew. If, for instance, I have three boys named Abraham in my class, I cannot state in Hebrew, “I have three Abrahams in my class.” This, explains the Ibn Ezra, is because objects are part of a group and as such the relationship may be demonstrated in any of the above ways. But the name of a person (i.e. a proper noun) is singular. It is a world unto its own and does not define itself as part of the group.

Imagine the DC sniper holding up the rifle and a face appearing in the crosshairs, swimming into sharp focus. If we were standing behind him peering into the rifle's sight, what would we see? A single person?

He isn't just killing a single member of the human race -- he is killing a world.

And then a shot rings out. He isn't just killing a single member of the human race -- he is killing a world. An entire universe of love and expectation, ambition and dreams, cares and worries, happiness and disappointments. This is what the sages meant when they spoke of a person being an “entire world.”

When a bomb explodes anonymously in a crowd, we obfuscate the individuality of those killed by both the numbers involved and the haphazard manner of the bombing. The shooting of the sniper most sharply delineates the individuality of each victim. They are killed one by one with the killer intensely focusing in on the victim. It is a murder directly aimed at the most elevated and human of our characteristics: our individuality. And it is in our individuality that we most clearly appreciate that each person is a universe unto himself.

There is one more lesson I'd like to share. Our sages equate humiliation of a person to murder, for “the blood is drained from his face and he becomes pale,” which is analogous to murder. When we have another person in our crosshairs, and we are about to unleash a cruel remark or a devastating criticism, do we pause to think about the victim? Stop for a moment to realize that the person we are about to emotionally crush and destroy is a person with dreams and hopes, love and expectation, a complete universe. Let us begin looking at people with that attitude and we will stop destroying worlds.

An Open Letter to Aish.com Readers from the Chief Editor of Aish.com

Are You For Real?
Vayelech 5783: Regret and Repent
Rabbi Sacks: Focus On the Important, Not the Urgent
Put Your Foot Down: Are Human Feet Poorly Designed?
Comments
MOST POPULAR IN Current Issues
Our privacy policy
Aish.com Is Looking for Great Writers