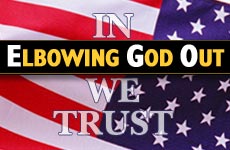 The ruling barring "under God" from the Pledge of Allegiance shares a similar hubris that contributed to the destruction of the Temple in Jerusalem.

Back when I possessed the charming innocence of a twelve-year-old, I took offense at the wording of the Pledge of Allegiance. Why, I wondered, was I expected to pledge my allegiance to a flag? Proclaiming loyalty to my country I could understand, but to a piece of fabric?

Moreover, as I had concluded with unshakable, preadolescent self-confidence that human existence was nothing more than a cosmic accident, I found the phrase "under God" equally offensive.

So while my classmates were loudly reciting the full text of the Pledge of Allegiance, I was quietly editing my own recitation: I pledge allegiance... to the United States of America... one nation... indivisible, with liberty and justice for all.

By my final year in high school, however, having acquired a sufficient measure of sophistication to appreciate the importance of symbolism, I no longer resented being asked to swear loyalty to a flag. But we weren't reciting the Pledge of Allegiance any more, so I had no chance to mend my ways.

The phrase "under God" struck me as a comforting expression of humility.

I was also less certain concerning the existence of a Creator. Six years of secondary education had opened my eyes to a universe so enormously complex that to embrace any world view as extreme as atheism seemed the height of arrogance. The phrase "under God," therefore, struck me as a comforting expression of humility, that we as a nation recognized the grandeur of our universe and conceded its unfathomability.

Perhaps the circuit court judges who ruled the phrase "under God" unconstitutional might have interpreted the law with more humility if they had familiarized themselves not only with the letter, but with the spirit of the Constitution. Perhaps they might have better understood the intent of the Framers if they had read, or remembered, the words of Alexander Hamilton: "The sacred rights of mankind... are written, as with a sun beam in the whole of human nature, by the hand of the divinity itself; and can never be erased or obscured by mortal power."

If the founding fathers weren't afraid of mentioning God in the Declaration of Independence, why should we fear the utterance of His name in our schools?

Considering the many references to the Almighty among the writings of the Framers of the Constitution, it's astonishing how often we hear the Constitution invoked as the basis for expurgating every reference to God from the public arena. If the founding fathers weren't afraid of mentioning God in the Declaration of Independence, why should we fear the utterance of His name in our courthouses or schools? But many among us are afraid, afraid with a fear born of insecurity.

Indeed, what is more terrifying than the unknown, and what is less known than what awaits us when we depart this mortal coil? As Prince Hamlet pondered: "To sleep? Perchance to dream! Ay, there's the rub." For the devout atheist, there is no greater dread than the haunting suspicion that he might be wrong, that there might truly be a Creator and an accounting before Him upon arrival in the hereafter. To the atheist, every reference to God is an unwelcome reminder that the rest of the world is not so certain that our existence is random and without purpose.

The great Rabbi Joseph B. Soloveitchik summed it up like this: "All extremism, fanaticism and obscurantism come from a lack of security. A person who is secure cannot be an extremist." And, indeed, extremism in the form of radical religion or radical nihilism is one and the same. The 19th century anarchist used techniques not unlike the suicide bomber of today to advance his own variety of jihad. The modern anarchist uses manipulation of the law to advance his cause, supremely confidant that he understands the Constitution better than its authors.

The Talmud describes how, during the last days of the second Temple in Jerusalem, the Jewish people observed the law of the Torah meticulously according to its letter. But they failed to look beyond the letter of the law, to strive for understanding and fulfilling of the spirit of the law, to labor in applying the essence of the law toward the transformation of their character. This failure, together with a senseless hatred born of mutual suspicion, mutual contempt and, ultimately, the uncompromising assertion of their own egos, resulted in the destruction of the Temple, the deaths of millions of Jews, and the beginning of our long, dark exile scattered among the nations of the earth.

The word ego is in fact an acronym for Elbow God Out.

It has been observed that the word ego is in fact an acronym for Elbow God Out. A daily reminder that we should receive our national freedoms with humility is among the surest means of preserving those freedoms for our children. Close to two thousand years ago, instead of subduing their egos before the Highest Authority, instead of subjugating their ideological differences to the pursuit of shalom, peace, the Jews distorted Divine law to serve their own agendas, thereby sealing their fate and the fate of the Temple.

The sages teach that any generation that does not rebuild the Temple is considered to have destroyed it. But if we return to the law with humility and reverence, then we can truly hope to rebuild that which for so long has been lost.

Has Social Media Us Made Stupid?
Lokshen Noodle Kugel Recipe
G-d Time
Shavuot is The Holiday of Cheesecake and Blintzes
Comments