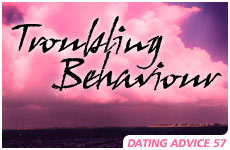 Anger, flirting, irresponsibility. The warning signs are fast and furious. But she still wants to hang in there.

I have been dating a man for one year. After four months of dating, we got engaged and then I started to note some troubling behavior -- i.e. angry/hostile words to his daughter and me, flirting with other women, not holding a job, etc. Needless to say, I called off the engagement. He was unwilling to acknowledge his part, claiming that I was overly sensitive. He was also extremely threatened by my 8-year-old son and critical of my son's relationship with me, saying that I was too lenient (which I probably am).

Anyway, our courtship has been very stormy and a few people in the community have told me that he has anger problems, tends to ruffle people's feathers, doesn't "fit in" and alienates people. A reliable source told me that his problem may be chemical.

Now here's the rub: Despite all this troubling behavior, I still have very strong feelings for him and I keep coming back. I deeply care about him and I want him to get some help. He says the only way he will is if I promise to marry him. When I told him that I cannot promise, he very angrily said that I am making a big mistake, that I am the most amazing woman he has ever met and he cannot stand the pain of picturing me with another man. He says he wants to work on things together and feels he can change -- but only if I am willing to focus on him.

Am I off-base by not promising to marry him? I already miss him. Please help me. I really want love in my life!

Years of experience has reinforced our position that if you need a therapist to help you fix a relationship before it's gotten off the ground, you haven't got anything worth fixing. This is in contrast to troubled marriages that started out healthy, where oftentimes outside help can succeed, since there was a healthy foundation to the relationship.

It isn't your dating dynamics that need work -- it's the man you are dating who needs help. He needs therapy regardless of whether you are in his life or not. This therapy may take a long time, and requires a strong desire on his part to address the roots of the unresolved anger he carries inside him. Much of the therapy may be painful, and he will need courage to face difficult memories. For the therapy to succeed, he has to recognize that he has a problem and wants to deal with it.

The fact that this man says he'll only get help for his problems if you stay in the picture leads us to believe that he's not too motivated to get the help he needs. He views the problem as one with the dating dynamics, rather than with his own unresolved anger. Even though he says he wants to get help, he thinks help is necessary only because you need him to change. How much can therapy succeed if he views the problem as yours, rather than his?

You have to accept the fact that you can't be his rescuer. Change only comes from within, and this man hasn't reached the point of wanting to confront his difficulties and make a change.

We sympathize with the fact that you care for him and that you don't want to be alone. Undoubtedly, he has some very fine qualities. However, step back for a moment and picture how life might be with this man, day after day, year after year. You have to assume that he will not change his basic nature. How often will he lose his job, and at what point will the job offers stop coming in? Will he and your son ever have a workable relationship, or will he feel more threatened as time goes on? How will this hamper your own relationship with your son? Will you and this man ever have common friends? Has he alienated so many people that your family will not feel comfortable in any of the synagogues in your community? How far will his flirting with other women go, and how many times are you willing to allow this to hurt you?

Many times, a person is willing to overlook glaring warnings of difficulties because they convince themselves that they can accept and live with another person's serious character flaws. Deep inside, they even secretly hope that the person they love will change. However, after marriage and the person doesn't change, these flaws may become even more pronounced. Often, the spouse will say: "I thought I could handle this marriage, but I was wrong. This was more than I bargained for. I want out." Others will endure the difficulties resulting from their spouse's behavior, but spend much of their married life being miserably unhappy. A tiny percentage of these marriages succeed, but only because the troubled individual's spouse wholeheartedly accepts their other's emotional handicap.

You've seen for yourself how emotionally destructive this man's anger can be. People who know him have "predicted the future" for you, and their predictions will probably turn out accurate. Of course, in the end, only you can decide if it is worth taking the slim chance that you'll be able to live with the consequences of his behavior for the rest of your life. 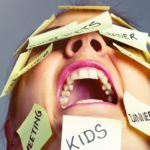 "We Want Our Money!"1 min read

Bread: Back to Basics5 min read