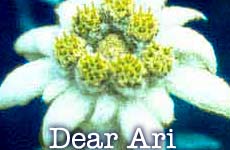 Ari Weiss was the first person I have personally known who was murdered defending the Land of Israel.

Ari Weiss was the first person I have personally known who was murdered defending Eretz Yisrael. My deepest sympathies go out to Rabbi Weiss and Susie, Pnina, Tali, Eli, Yedidya, and Ayelet.

I met the Weiss family the day they arrived in Israel, 10 years ago. Everyone in Ra'anana was so excited that a new family from the U.S. was making Aliyah and joining our community, and many people came to the Mercaz Klita (Absorption Centre) to meet this new family. I was especially excited to hear that a girl my age was arriving, (Pnina) as I myself had only made Aliyah one year before -- I was 14 years old.

I have so many memories of growing up, living across the street from the Weiss family. In the 10 years that they have been here, they are one of the most well known families in Ra'anana. So many people are feeling the pain of this tragedy.

Making Aliyah is by no means simple. There are many obstacles standing in the way. Family and friends thinking you are crazy, some on the verge of never speaking to you again. Where to live, what employment opportunities will be available -- if any at all, the language barrier, the difference of mentality, will the children fit in socially and academically, and not to mention the security situation, combined with the possibility of father and children having to serve in the Israel Defense Force.

The Weiss family moved to Israel, making enormous sacrifices. Good jobs, a nice community, and they came with their children ranging in ages from baby to teenager. Ari's full name is Ari Yehoshua, sharing the same Hebrew initials as Eretz Yisrael. Their daughter Ayelet Tziona, who was born the week of Ari's Bar Mitzvah, was their first child born in Israel.

Ari's life could have been much easier living back in Texas, but he gave his life for the Jewish people.

At Ari's funeral, I noticed that the friends who spoke of him were all Israeli. Ari acclimatized to life in Israel so well. He never felt that making Aliyah was a burden. He was truly happy to be living here and to serve in the army. His life could have been much easier living back in Texas, but he gave his life for the Jewish people.

I have made Aliyah twice -- once with my parents and brother from Los Angeles, and once with my husband and daughter from Melbourne, Australia. An Israeli friend once told me that she didn't understand why American Jews would make Aliyah. I proceeded to list all the negative things about life in America, but then I realized that we didn't move to Israel because of those aspects of American life. We came here because of the very positive, very wonderful things about our homeland, our Holy Land. I believe I was meant to live here. Through the good and bad, this is my home. Ever since I was a little girl, I thought about Israel. When my parents made Aliyah, I did not come kicking and screaming; I was so happy and joyful. Every positive thing about myself is due to growing up, from 9th grade, in Israel. All my values and ideals, I owe to the life Israel gave me. I would not be the Jew I am today if I hadn't made Aliyah.

Every day as I walk my children down the streets of Ramat Beit Shemesh, we see many army helicopters flying overhead. Our daughter, Hanna Aliza always asks me about them. I look up and know that it is only because of them I am able to walk peacefully in the streets of my homeland, the homeland I always wanted to live in as a child, and the homeland my heart cried out for during
the three years I was in Australia.

Ari, our brave soldier, it is because of you that my family is able to live such a pleasant life here in Israel. You did so much for me and I thank you. Your family will never be the same and neither will Am Yisrael. I'm so sorry. I'm so sorry that I have never given to Am Yisrael what you have given to it. I'm going to try even harder now to bring about the final redemption, so we can all meet again, so I can thank you in person, and so we will have no more sorrow.

When I came home from paying a shiva call at your parents' house, I found myself singing quietly because it makes me feel better when I'm sad. I realized I was singing the song "Aidel Weiss" from the film "The Sound of Music." Aidel Weiss! How appropriate! For that's what you are, Ari Yehoshua Weiss... "Aidel Weiss, Aidel Weiss... Bless my homeland forever..."

We are all thinking of you, Ari, and we are with your family and friends at this time. Watch over us, and please tell Hashem that the pain is so terrible, but also thank Him for giving you to your family, to all of Ra'anana and to all of Am Yisrael. It is because of you, and all of our soldiers, that we are still (trying) standing strong, never giving up, still having so much hope. As your father requested at your funeral, let us all sing together "Am Yisrael Chai," in honor of you, our dear, brave Ari Weiss, of blessed memory.

Robin and her husband Levi made Aliyah from Melbourne, Australia in early 2001. They live in Ramat Beit Shemesh with their two children Hanna Aliza and Eliezer Tzvi.

Operation Good Neighbor: Syrian Thanks Israel for Saving her Life

Inside Hebron: A Personal Encounter

Coming Home, Full of Hope
It Takes A Lot Of Faith To Be An Atheist
How Instagram Brought Back This Nostalgic Soup
What Makes Eli Run?
Comments
MOST POPULAR IN Israel
Our privacy policy