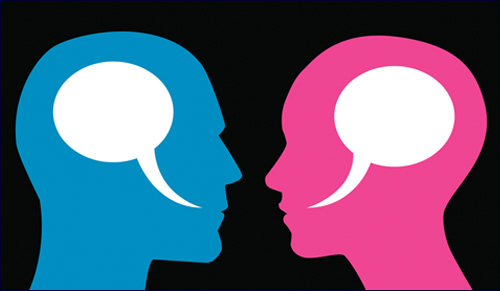 What you say and how you say it make a huge difference, especially in marriage.

We all have terms of affection for our spouses (at least most of us do). Sometimes I tell my husband that he’s “my old man”. But it occurred to me recently that although he recognizes the underlying sentiment, he may not actually like it. It’s not that we’re not both getting old – we have the driver’s licenses and wrinkles to prove it, but no one likes to be reminded. Even if it’s said with love and affection.

This lesson is taught to us by none other than the Almighty Himself in His dealings with our forefather Abraham and his wife Sarah. When told that she is going to have a child, Sarah laughs and says, “But I am old and my husband is old.” When the Almighty repeats the story to Abraham, He carefully leaves out the part where Sarah mentions that Abraham is old. Abraham was 100 years old at the time and Sarah was 90! If my husband and I are considered old, then Abraham and Sarah were VERY old. And, no doubt, they knew it! They had also probably been married about 80 years at that point and we know it was a good, solid, relationship, a marriage to emulate and admire. So why did the Almighty feel compelled to leave out Sarah’s comment about her husband?

Because it could have been hurtful, even if only slightly. Because that’s the level of sensitivity we want to have towards other human beings. Because it’s not worth even taking the slightest chance that our words could case someone else pain.

Imagine how our lives and the lives of those around us would be different if we brought that kind of thoughtfulness to everything we said. I’m not sure that I actually can imagine that! But wow, it would really change all of our interactions and relationships.

King Solomon writes in Proverbs that “Death and life are in the power of the tongue.” When I first read that statement I was puzzled by the order of the words. Wouldn’t it be more natural to say life and death? But I think that he was making an important point. It’s so much easier to hurt people with words than to help them. Hurting them with words requires no thought whatsoever and is frequently the result of no thought whatsoever! Helping with words, on the other hand, requires much deeper thought and effort.

If we don’t stop before we speak, we have the potential to hurt people all day long with what we say. Not because we plan to be mean or nasty – but because we don’t plan not to. Did I accidentally mention a party they weren’t invited to? Did I thoughtlessly suggest that they didn’t look as good today as they did yesterday? Did I praise a group of children and leave theirs out? Did I express my disdain for a viewpoint I didn’t realize they held? Did I praise myself at their expense? Did I exclude them from a plan or a conversation? Did I speak condescendingly or contemptuously? The list goes on and on and on.

None of us are perfect and we all slip up and say things we shouldn’t. But if we are aware of the challenge it should happen less frequently. It’s not fun to have to watch everything we say, and it may not make us the life of the party, but at the risk of overusing the example, no one is eulogized as the “life of the party” but we may say that “she never said a bad word about anyone” (even unintentionally, even in jest, even with affection!). That would be a true accomplishment and praise indeed.

What On Earth Are We Arguing About?
Big OnThe Little Things
Chraime Egg Boil
Is Grease the Word?
Comments