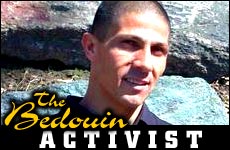 Two years ago, a few proud Bedouin Israeli citizens like myself asked: what is our position and status in the State of Israel in the midst of its current situation? After all, Bedouins are part of Israel's success story. During current times, when Israel is being attacked and accused of being a racist state, an 'aggressor and an oppressor', we decided that the smallest and probably most effective thing we could do is to spread our story as part of Israeli society.

I, Ishmael Khaldi, am Israeli. I served with the IDF, with the Israel police, and with the Israeli Defense Ministry. In the last year, I have lost two Bedouin friends on army duty (God bless their memory) defending the State of Israel. My friends and family feel that we have a common destiny with the Jewish people in Israel: our grandparents created this land with Jewish immigrants who arrived during the 1920s, '30s and '40s to build a democracy.

Because of this connection to the State of Israel, I cannot stand on the sidelines during Israel's time of need. I feel that I must speak up and be heard.

I recently returned from a two-month campus speaking tour in North America, mostly organized by Hasbara Fellowships. This was the fourth tour I had done over the past year. I've traveled the United States coast to coast (of course, being a Bedouin nomad, I mainly took Greyhound!) and flew for a ten-day tour across Canada.

The tour was certainly miraculous -- a Bedouin shepherd who had never been to any major city before, all of sudden found himself in downtown Manhattan! It proved to be one of the most adventurous, challenging and enriching experiences of my life.

I came to the U.S. and Canada to speak on college campuses about Israel, as one who certainly holds a perspective that is rarely heard -- a proud Israeli that is not Jewish. I came to share one man's tale of Israel's culture, society and politics from the perspective of a Bedouin minority in the Jewish State.

Arriving in North America, committed to defending Israel from the poisonous venom of hatred and attacks that I had heard much about, I expected to see the same commitment on campuses among the Jewish students. Unfortunately, this wasn't the case.

I had heard much about the struggle of pro-Israel student activists, attempting to counter the unbalanced, biased and false accusations made against Israel. I had not come to North America to preach that Israel was perfect. As all Israelis know, Israel has problems like all nations of the world. Still, many students tried to stop me from speaking. There were even students who had the audacity to compare me to Joseph Goebbels, the Nazi propaganda minister, making false claims that I was doing the same for Israel.

The United States has always been described as being the 'land of the free' and a home for free speech. How can New Hampshire's slogan read, "live free or die" if the student union is allowed to ban me from telling a cultural story? I can't believe that the hatred for Israel is so strong that student governments are able to defy their own dignity as free American citizens, in order that the truth about Israel should remain a secret.

I was not as shocked by the Arab questioners as I was with the personal threats, and the severe apathy of the majority of Jewish students.

The deep-seated hatred manifested itself clearly throughout the country with the many loaded questions asked by anti-Israel students. For example, a Muslim student at Rutgers University completely ignored the fact that Israel is a free state and asked, "How could you support a Hebrew state if you're not Jewish?" Another questioner asked, "Don't you think that if Israel didn't exist, then the Palestinians wouldn't have any problems?"

In Milwaukee, I was asked, "How many Palestinian old men and women have you humiliated while serving in the Israeli police?" How can such a question be asked? Only if the truth were known, that Israeli soldiers have on many occasions helped Palestinians.

The situation I encountered on many of the campuses in North America and Canada was horrifying. I was not as shocked by the Arab questioners as I was with the personal threats, and the severe apathy of the majority of Jewish students.

In my years of speaking to people, I've never received threats or personal attacks like I did speaking on campuses. There were threatening incidents at both the University of Florida and at California State University. Both were chilling. The crowd in Florida was one full of anger and hatred, yet I had to stand before them unsure of the enemy who had sent threats earlier that day. In California I spoke facing a young student who wore a T-shirt with a swastika on it, chewing on a piece of paper as some sort of protest against my talk.

On the other hand, the Arab students and their supporters knew almost all the last minute news clips from the Middle East. How can Israel's voice be heard if the Jewish students don't have the facts or the knowledge to speak up? I don't take the mass of Jewish students to task for not agreeing with all of Israel's policies, but I do take them to task for not caring about Israel or what happens there. It is the apathy which allows the anti-Israel propaganda to strengthen itself more and more over time.

As a personal aside, sixty years after the horrors of the Holocaust, Israel is going through one of the most critical times in its history. More than 60 years after my grandparents joined their destiny to that of the Jews coming to the Land of Israel, I feel that history is somehow moving backwards. Anti-Semitism and hatred towards Israel is soaring. Comparing me, a Muslim Bedouin who supports Israel, to the Nazis is just another clear piece of evidence.

History will not tolerate us if we keep our voice silent.

And yet, 60 years after the horrors of the Holocaust, I felt that on campus, the Jewish voice is silent. Where are the Jewish students fighting back? My commitment in these crucial days, while Israel is struggling for its right to exist, is to continue the heritage of my grandparents and to stand together to fight for the State of Israel.

History will not tolerate us if we keep our voice silent. We must roll up our sleeves once again to build a better future for Israel and all of its loyal citizens. Israel's right to exist is my right and my people's right, just as Israel's destiny is our destiny.

But just as history demands for me to fight for Israel, history also will not tolerate a generation of Jews who don't care.

This article originally appeared on www.israelinsider.com