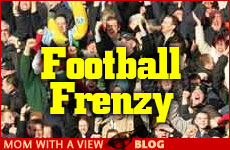 Why was I fighting back the tears at a recent Patriots game?

I couldn’t believe the intense emotion crackling in the air.  The Star-Spangled Banner was sung.  Flags were waved, fireworks exploded and three F-18 fighter jets flew overhead in perfect synchronicity.  I was overcome with the emotion of the moment.  I had to fight back the tears. You had to be there to feel it.  And then they introduced the players on the home team. I was at a football game.

I have to confess my dirty little secret.  I really love football.  I can’t explain it or justify it; I just really like it.  But I exercise self-control and restrict myself to one game a year.  We go to a friend’s house that first Sunday in February and watch the Super Bowl.  Other than that I stay away.  And I haven’t been to a professional game in at least 30 years, probably more.  I thought it might be fun to go to see if it’s as good as I remember.

So last Sunday I dragged my loyal husband (talk about role reversal!) down to San Diego to watch a game. And what struck me the most – and what frightened me the most – was the emotion.  From the intense beginning and through the game, the crowd was constantly being whipped into a frenzy.  When the opposing team had the ball, the boos were deafening.

Life’s most important decisions can’t be decided on the basis of emotion.

And I reflected on how dangerous and easily misled emotion can be.  I was stunned by myself.  What were those tears about? I couldn’t care less about the Chargers or the Patriots.  There’s nothing particularly heart-warming about a football game.  In fact, you could probably argue the opposite is true.  But the atmosphere cleverly orchestrated an emotional response, designed to make me feel part of something bigger than myself, something important, special and transcendent – no one dared reveal the Emperor’s New Clothes.  No one dared whisper, “It’s only a game; it’s only football.”

That’s why I’m suspicious of emotion. It’s so easily manipulated. It is a cornerstone of Jewish thinking that we lead with our heads and not our hearts.

Watching the footage of Hitler’s rallies makes you even more conscious of the destructive capacity of emotion.

I’m not advocating a sterile cerebral existence, only the necessity of bringing intellectual perspective to what our emotions are telling us.

People get very worked up over sports teams. They get very emotionally involved in whether they win or lose (as if the fans themselves were playing).  The outcome becomes emotionally important (and not just because of their fantasy football team) and they lose perspective. Fists fly, blows are exchanged.  At soccer matches in England and Europe, deaths have even occurred.  Over what?

But it’s not just about sports. Life’s most important decisions can’t be decided on the basis of emotion.   What we feel is less relevant than what the facts are, what the reality is.

This requires discipline and strength of will. But it is ultimately the only way to make good decisions.  It’s frightening how easily we can be seduced.  We need to be on our guard.

By the way, the Patriots won.  And for some odd reason, I was happy about it!

You're Bad: The Detrimental Effects of that Pernicious Label

We Never Know the Whole Story

I Thought I Had More Time

Up, Up and Away
Why My Iranian Mother Didn’t Want Me to Become a Religious Fanatic
The Jewish History of Prague
Why the Sexual Revolution was Bad for Women
Comments
MOST POPULAR IN Family
Our privacy policy
Aish.com Is Looking for Great Writers