Voices from the Valley of Death 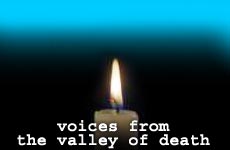 A message to the Jews of the world from bereaved families during shiva.

"I want that all Jews should do tshuvah [turn toward God]. If every Jewish child would recite 'Shema Yisrael' and a chapter of Psalms every day, that would save us."

From Dahlia Nechmad, whose two sons Saul (15) and Eliyahu (16) were murdered in the Beit Yisrael Bar Mitzvah terrorist attack:

"Rabbi Akiva was right when he said that 'Love your neighbor as yourself' is the fundamental principle of the Torah. Love is the key. It is the secret of life. If there were unity between Jews, if every Jew loved every other Jew, that would stop the terror attacks.

"From my experience, I see that if you have love, you have everything. First a person must love his family, then the people of his city, then his nation, then the whole world.

"As the sages say, 'the world is built on chesed [acts of loving kindness].' Even one kind word, even a little smile, is enough to uplift our situation. The chesed that I received from other people -- the nurses, the people sent by Kids for Kids -- during the almost four months Eli was in Intensive Care, that's what kept me on my feet.

"Kids for Kids sent a volunteer named Avraham Berger to give Eli massages while he was in the coma. While Avraham was massaging Eli, he would encourage him with his words, saying, 'We love you. Don't worry about anything. Everything will be all right.' Loving words give life."

From Avner Franklin, whose daughter Michal (21) was murdered in the French Hill terrorist attack:

"The Peace Process has obviously ended. And the process we have to work on now is the rehabilitation of the whole nation. We have to come together as a united people, and pray to God to end the suffering. As a united people, we have to make the decision as to how to eradicate the hurtful and destructive Arab campaign to destroy all our children."

From Sarah Franklin, whose daughter Michal (21) was murdered in the French Hill terrorist attack:

"All the Jews of the world should come to Israel. And if you'll ask me, 'Aren't you afraid for your other children?' of course I'm afraid. But what are we going to do? Run away? All of the people who think they support us by sending money here, we need them to be here physically, to contribute to the security, to send their sons to the army, to pay taxes. The Jews of the world should come and be with us and share the burden with us."

Read A Tale of Two Families for an in-depth look at the Franklin and Nechmad families.

Dear Citizen of Gaza
Can You Show Me This "God?"
How to Become Immortal
Judaism and Mental Health
Comments
MOST POPULAR IN Israel
Our privacy policy
Aish.com Is Looking for Great Writers