The Day Rechavam Ze'evi Was Assassinated 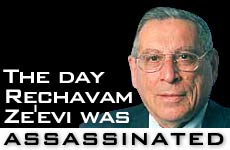 For me, Wednesday, October 17, was a day that started in tragedy and ended in celebration.

The morning news carried the horrifying announcement that veteran Knesset member Rechavam Ze'evi had been shot in the head and neck outside his room in the Hyatt Hotel. He was dead on arrival at Hadassah Hospital. The National Front for the Liberation of Palestine claimed responsibility for the assassination.

I was devastated. "Gandhi," as he was affectionately called, was a supreme lover of the people of Israel and the land of Israel. In a political climate where even the staunchest leaders are as bendable as my son's Raggedy Andy doll, Gandhi stuck to his principles and his positions with tenacious firmness.

Gandhi's murder, one more blow in a year of incessant blows, sent me and all of Israel reeling.

My husband, a musician, was scheduled to play that evening at the dedication of a new Torah scroll at a Yeshiva here in Jerusalem's Old City. I did not feel like celebrating anything, but agreed to go in order to bring my little son.

Making our way through the Jewish Quarter of the Old City, we passed the darkened, empty shells which so recently had been restaurants, souvenir shops, and refreshment stands. Tourism was Israel's second largest industry before this latest wave of terrorism scared away the tourists. Not only are hotels, restaurants, tour guides, and taxi drivers casualties of this war, but the secondary effects have undermined the whole economy.

Just that day Tony, the owner of the Jewish Quarter's sole grocery store,
disclosed to me that parents who are embarrassed to face him because
they cannot pay their grocery bills send their young children to buy bread.
Although Tony's own gigantic debt to the bank prompted some people to
suggest that Tony not extend any more credit to delinquent families, Tony
told me, shaking his head, "I just can't do it. I can't send a child home
without his loaf of bread."

Arriving late at the Torah dedication, my heart surged as we met the procession head-on in one of the narrow lanes of the Old City. Two rows of children holding flaming torches led the procession. Next came scores of Yeshiva students singing stirring songs about the greatness of the Torah. Then, under a wedding canopy held aloft by Torah scholars, the new Torah scroll, bedecked with a silver crown, was carried jubilantly, like a king encircled by his adoring subjects. A singing, clapping throng of men, women, and children followed.

When the procession reached the main square of the Jewish quarter, the Torah under its wedding canopy took its place in the center. Concentric circles of dancers swirled around it, as accordion and clarinet played song after lilting song.

Standing on a low stone wall at the periphery of the square, I was mesmerized by the scene. Jews have been doing this for at least 2,000 years, I realized. In ancient times, at this very place, inside the walls of the hallowed city of Jerusalem, the ancestors of today's Jews also greeted a new Torah scroll with torches and dancing. The same Torah. The same place. The same jubilation by Jews who cherish and live by every precious word of the Torah.

In a world swirling around at a dizzying and frightening speed, here was a stable axis, an immutable center, grounded in the bedrock of God's own eternal will.

Four Torah scrolls from the Yeshiva, wearing their silver crowns, were marched out to greet the new Torah scroll. Together, they led the procession toward the Yeshiva.

On the way we passed the ruins of Tiferet Yisrael, once the second largest and grandest synagogue in the Middle East. Photographs of the Old City of Jerusalem during the first half of the 20th century are dominated by two huge domed structures: the Hurva Synagogue and Tiferet Yisrael. Both synagogues were blown up by the Arabs in 1948, shortly after the Jordanian Legion conquered the Old City and expelled its Jews. The ruins of Tiferet Yisrael, with its elaborate stone arches, remain as a wrenching testimony to what we had and what we lost.

As the procession, singing and dancing, passed the ruined synagogue, I realized that, while Jewish history is replete with ruined synagogues, destroyed communities, and assassinated leaders, the Torah and its way of life are indestructible. They have survived three millennia of wars, displacement, and bloodshed, and they will continue to survive, whatever the present chaotic world situation inflicts on the Jews of the Diaspora and the Jews of Israel.

Israel's Pull
Mind Over Milkshakes
Love the Convert
In the Shadow of David and Goliath
Comments
MOST POPULAR IN Israel
Our privacy policy
Aish.com Is Looking for Great Writers