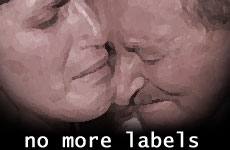 There were no "Charedim" (orthodox Jews) who died in Sbarro.

And not one "Chiloni" (secular Jew) lost a limb, not in Sbarro.

There were no babies of "modern orthodox" parents mangled, and silenced in Sbarro.

No "Dati Leumi" (national religious) families buried and mourn their children, not after Sbarro.

There were no "Americans" sliced to pieces by flying nails in Sbarro.

Ten-year-old Yocheved of blessed memory wasn't "French." Nor is Miriam her sister who fights for her life. After Sbarro.

Not one "Dutchman" was laid to rest on Har HaMenuchot. Not Motty, nor his wife, nor any of their three children. The day after Sbarro.

There were no "Baalei Teshuva" (returnees to Judaism) who died in Sbarro. No FFB's ("frum from birth"), and no one struggling with Judaism.

No diehard pluralists, no doves, no hawks.

No one from the left, nor the right.

There were no "Sephardim" sprayed with tiny bits of shattered glass in Sbarro.

No "Ashkenazim" groped for their missing legs.

There wasn't even one teenage girl "from Australia" shattered beyond recognition in Sbarro. And the friend buried next to her was not an "Israeli."

There were no Israelis killed in Sbarro. None were even hurt.

Rabbi Shimon Apisdorf lives in Baltimore. Two hours after hearing about the Sbarro bombing, he was on a plane headed for Jerusalem, where he spent the next week consoling mourners that he didn't know, and taking late-night shifts at the hospital saying Psalms for wounded that he didn't know.

The Search for Amichai

A Special Kaddish for a Fallen Soldier

The Iraqi War and Me

His Hands upon Us

Israel Calls
Should I Break Up, Get Engaged or Keep Dating?
Time Is Your Precious Commodity
A Constant World in Flux
Comments
MOST POPULAR IN Israel
Our privacy policy