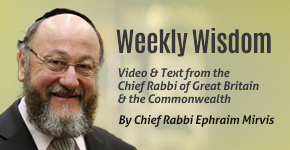 There was a sharp dispute between Yitzchak and Rivka with regard to their twin sons. Between the love that Yitzchak had for Eisav on the one hand, and the love that Rivka had for Yaakov on the other.

We can understand this, through a passage in the Ethics of the Fathers, Pirkei Avot, Chapter 5, Mishna 19. There the Mishnah tells us that when love takes place because of a reason - it depends on 'something'. If that 'something' disappears, then it is possible that the love might disappear as well - that the love might become 'past tense'. However, if there is love which is natural, then that love will endure forever.

'If there is love which is natural, then that love will endure forever.'

From Rivka we learn, that true love in this world is affection with no ulterior motive. It is there in a very sincere way. That is the type that will endure forever.