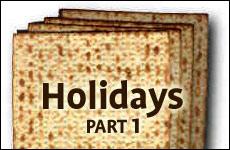 An overview of the Jewish year, and all about Passover.

The Hebrew word for holiday is Moed, literally "a fixed time." Implicit in this is the idea that the Jewish calendar is not linear. We do not simply move through time, where a holiday "commemorates an event." Rather, Jewish time is cyclical; each year we return to that spiritual reality, tap into the energy of the day, and relive the experience. It is a unique opportunity for personal growth.1

There are a few different patterns that emerge in the Jewish year. The most obvious is the set of three pilgrimage festivals: Passover, Shavuot and Sukkot. The Torah (Exodus 34:23) tells us that on these days, all able-bodied people should appear in Jerusalem for a national celebration of service to God. In Hebrew, this is called the Shalosh Regalim. 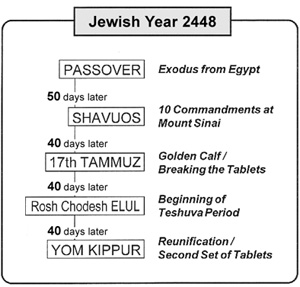 If you look in the Torah, you'll see that the Hebrew months don't have names. Rather they have numbers, counting from the month of Nissan, which is described as "the first month" (Exodus 12:2).

Order of the Months 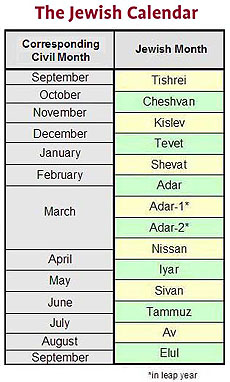 Interestingly, there are actually two ways to look at the Jewish year. One is to view the year as beginning with Rosh Hashana (the first day of Tishrei, in the fall). However, as noted above, the Torah refers to Nissan as "the first month" (coinciding with Passover in the spring).4

How are these two ideas rectified? In the Jewish calendar, we count the new "year" by Tishrei/Rosh Hashana, but we count the order of "months" by Nissan.

We'll now take a full tour of the Jewish calendar, starting with Passover in the spring:

Passover (Pesach in Hebrew) is known as the "holiday of freedom,"5 commemorating the Jewish Exodus from Egypt following 210 years of slavery. Passover is regarded as the "birth" of the Jewish nation, and its lessons of struggle and identity continue to form the basis of Jewish consciousness 3,300 years after the event.

Passover is an 8-day holiday (in Israel, seven days). The name derives from the fact that during the final plague – the slaying of the first born – God "passed over" the Jewish homes.6

Shabbat HaGadol – The Shabbat prior to Passover is called Shabbat HaGadol. This commemorates the day on which each Israelite family took a Pascal lamb and tied it to the bedpost, in preparation for the Passover Seder which would come five days later.7

Disposing of Chametz – The days (and weeks) prior to Passover are spent cleaning one's home of all chametz (leavened grain products), as these are forbidden for consumption (and even ownership) during the week of Passover.8 9 We dispose of (or sell) all bread, cookies, pasta, beer, etc. – and purchase only products labeled "Kosher for Passover." To avoid any problems of residual chametz, we also have special sets of dishes and pots for Passover.

On the night before Passover (14 Nissan), there is a final inspection of one's home, called Bedikat Chametz. This is followed by a declaration "nullifying the chametz."10

The following morning, the eating of chametz becomes prohibited from mid-morning, and all leftover chametz is burned (Sraifat Chametz). This is followed by a slightly different declaration "nullifying the chametz."11

When a financial loss is involved, it is possible to sell one's chametz to a non-Jew prior to Passover. This must be a legally valid sale. Any food that is sold must be put in a cabinet and taped shut. At the conclusion of Passover, a mechanism in the sale enables the chametz to revert to Jewish ownership. This procedure is complex, and should be done only by a qualified rabbi.12

Fast of the First-Born – On the day before Passover, it is a custom for all Jewish first-born males to fast, in commemoration of the slaying of the first-born Egyptians. In practice, many have the custom to attend the completion of a Talmudic tractate (siyum); this permits one to break the fast in order to celebrate the siyum.13

Seder Night – Passover is marked by an elaborate Seder on the first two nights (in Israel, on the first night only). The Seder (literally "order") is designed to give each Jew the experience of "going from slavery unto freedom." As recorded in the Haggadah, we tell the Exodus story, recount the Ten Plagues, and eat symbols of slavery and freedom.

We also eat bitter herbs14 (to recall the harsh Egyptian slavery), and drink four cups of wine – corresponding to the four expressions of freedom mentioned in the Torah (Exodus 6:6-7).15

Matzah – At the Seder, it is a special mitzvah to eat matzah. The most common reason for eating matzah is that on the morning of the Exodus, the Jews were so rushed in getting out of Egypt that the bread didn't have time to rise. Throughout the week of Passover as well, we eat matzah in place of our usual staple of bread.16

Chol HaMoed – The intermediate days of Passover (and also of Sukkot) are called Chol HaMoed, literally "the non-holiday holidays." The idea is that even though the entire week does not carry a prohibition of creative activity (melacha), the festival should still be a special time of limited involvement in one's everyday affairs. Thus throughout Chol HaMoed people wear their holiday clothes, the prayer services are lengthened, Torah study is increased and work is curtailed.17

Seventh Day of Passover – Seven days after the Exodus from Egypt, the Jews came to a true crossroads: the vast Sea of Reeds in front of them, and Pharaoh's pursuing army behind them. The sea miraculously split, and the Jews walked through on dry land. Just as miraculously, the sea closed back to drown the pursuing Egyptian soldiers. Today, the Seventh Day of Passover (plus the 8th day in the Diaspora) is a Yom Tov, with the incumbent restrictions on work.18

Pesach Sheni – In the days of Moses, certain Jews were unable to bring the Passover lamb offering, due to their having contracted a (temporary) spiritual impurity (tumah in Hebrew). As such, they were given a "second chance" to bring the Passover lamb, one month later on 14 Iyar. This day is known as Pesach Sheni, the "Second Passover."19 It teaches us a great principle of Torah: that although we may make mistakes, God gives us the opportunity to make amends.20

Jewish Holidays: Hanukkah, Tu B'Shvat and Purim
How I Learned to Love the Multiverse
10 Big Jewish Inventions
A Journey through Jewish Sicily
Comments