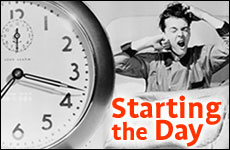 Halacha guides every moment of our lives. Start your day the Jewish way!

We all need sleep to reinvigorate our tired bodies and give us strength to make the most out of life. But we should not overdo it. Each person should sleep the minimum amount necessary to be healthy and productive.1 In any case, a healthy person should not indulge in more than eight hours of sleep each night.2

"One should strengthen himself like a lion to get up in the morning to serve his Creator." These are the opening words of the Shulchan Aruch, the standard code of Jewish law. A Jew should not be lazy, but rather have an excited, upbeat attitude about the upcoming morning prayers, and toward life in general.

The Talmud says that since a person's soul goes up to heaven each night, sleep is "one-sixtieth of death."3 The day should begin by contemplating God's kindness of allowing him to awake, refreshed and revitalized.4 As such, you should recite "Modeh Ani" immediately, even before washing your hands.5

The Sages decreed that every Jew must wash his hands upon awakening. This process is called netilat yadayim. A number of reasons are given for this practice:

Water may be left under a bed to be used for netilat yadayim in the morning, though it is preferable to cover it.9 It is forbidden to leave food or drink underneath the bed in which you sleep, as the tumah emitted from slumbering people has a negative spiritual impact on the food.10

It is ideal to wash your hands as soon as you wake up, to remove the tumah as soon as possible.11 This washing is done without saying a blessing. Then, after relieving oneself and/or getting dressed, a person should wash again with the blessing.12

Ideally, a Jew (even a child) who has not yet performed netilat yadayim, should not directly touch any food. There is no problem of a non-Jew handling food without washing netilat yadayim, since he is not required to do so.14

One must be careful not to touch any of the openings of his body before washing netilat yadayim.15

The washing process is as follows:

Ideally, wash your entire hand up to the wrist. However, if this is impossible, it is sufficient to wash the fingers up until the knuckles.17 If your hand is bandaged, you need to only wash your healthy hand.18

One's hands should be washed in a place that is clean and odorless. Today, most private bathrooms meet this standard. The problem arises when using a public bathroom – e.g. in an airplane.

If you have difficulty procuring a utensil with which to wash, you may wash with tap water by turning on the tap three times over each hand.19

After performing netilat yadayim in the morning, it is proper to wash one's face20 and rinse one's mouth.21

One should dry his hands and face on a towel.22 To dry them on a garment is considered undignified and is forbidden.23

Holding back from relieving himself when needed is harmful to one's health, and is thus forbidden.26 It is certainly forbidden to pray, recite blessings or study Torah in such a state. However, if the need is not pressing and you are in the middle of studying Torah, you need not interrupt your studies immediately.27

Even in the bathroom, dignity and privacy must be maintained.28 (See essay on Kosher Clothes for a discussion of the Jewish concept of dignity.)

From a Jewish perspective, every place has appropriate and inappropriate behavior. A bathroom is for taking care of bodily needs. Since a bathroom is intrinsically an unclean place, many things are considered out-of-place or even profane to do there:

After relieving oneself, the blessing Asher Yatzar is recited immediately upon exiting the restroom (after washing).38 If you forgot to do so, you may still recite it for up to 72 minutes, providing you do not yet feel the urge to relieve yourself again.39

The blessing is as follows:

Since this blessing thanks God for the wonders of the human body, reciting it with proper intent is considered a merit for good health.40

Click here to print out a beautiful full-color version of Asher Yatzar that you can post on the wall outside your bathroom.

Blessings and Customs of Shabbat
Why My Iranian Mother Didn’t Want Me to Become a Religious Fanatic
The Jewish History of Prague
Why the Sexual Revolution was Bad for Women
Comments
MOST POPULAR IN Jewish Law
Our privacy policy
Aish.com Is Looking for Great Writers