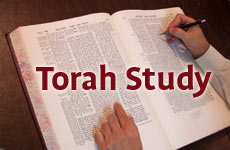 For the ‘People of the Book,’ Torah study is our national obsession.

The library was eerily silent. In the corner, a bored reader stifled a yawn. Any visitor who would dare to even cough out loud would be given a stern look from the librarian. It all seemed so cold.

Does this sound like the college libraries that you are familiar with? It probably describes most of them. Now contrast that to a Beit Midrash, a Torah study hall.

The large room is noisy and exciting, with many students studying in pairs. Each arguing their perspective, grappling to discern the truth from the words of the Talmud. A shout is heard above the regular buzz, as one student is trying to convince his partner of a particular approach to the law. The partner debates him and the two get into a fierce intellectual battle. The excitement in the air is overpowering and contagious. 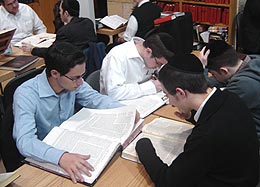 What is so attractive about Torah study that makes so many Jews want to devote the best years of their life to this pursuit?

Torah study is not merely a discipline; it is a way of life. At its core is the human desire to relate to the Creator. The Zohar teaches that God looked into the Torah as a blueprint before creating the Universe.1 The Torah serves as the medium for humanity to connect with the Creator, and to begin to fathom the purpose of the Universe. Anyone who ever exercised their mental energies in Torah study knows that it is something very special. It is the sensation of one's soul being nourished.

On the most basic level, Torah study gives a person knowledge of how to practice Judaism and fulfill the mitzvot. The Torah is the instruction book for life. You would never give someone a valuable piece of complex equipment without a set of instructions. It is no wonder that just as God gave us life, the most complex (and wonderful) gift of all, he also provided humanity with an instruction book, the Torah. 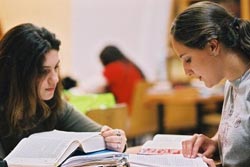 In addition, there is another observable benefit of Torah study: the clarity of mind that comes from studying the ancient Talmudic dialogues. After a while, one begins to view world-issues and personal dilemmas through a different lens. It is almost as if Torah study serves as a saber to slice through the confusing murkiness of today's world. Surprisingly, this clearness comes even if one is learning legal technicalities that seem to only have relevance in ancient Babylonian societies. In the modern world, many law firms have encouraged young lawyers to take a leave of absence to study Talmud, as experience shows that it sharpens the analytical powers of the mind.

Given all this, the Jewish people have earned the title of "People of the Book," and Torah study has been called our "national obsession."2

What Does the Torah Consist Of?

When Moses went up Mount Sinai, God taught him both the Written Law and the Oral Law. With God's dictation, Moses completed transcribing the Five Books of Moses before his death. He disseminated copies to each of the 12 tribes and placed one additional copy in the Ark of the Covenant. In this way there could never be any question as to legitimacy of the Torah text. Later, the prophets wrote additional books to complete the Bible.

See a page from the Hebrew Bible.

The Oral Law was a body of material given by God to Moses, with the instruction not to write it down. Rather, it would be passed from generation to generation in its oral form. By transmitting it from mentor to disciple, the vibrancy and elasticity would be maintained. There is nothing as outdated as ancient legal documents, sitting on the shelf and collecting dust. When Jewish values are transmitted orally, they remain relevant to any society, anywhere, anytime.

Both the Written and Oral Laws contain brilliant foolproof systems to maintain their accuracy and prevent corruption. For more on this topic, see two excellent articles:

The Oral Law was maintained in its purely oral form until the first century CE. At that time, Rabbi Judah the Prince realized that the oral transmission was being endangered, due to persecutions and the inability of the Sages to devote as much uninterrupted focus to the teachings. Courageously, he gathered together all the scholars of his time and compiled a written outline of the Oral Law, known as the Mishnah. This seminal work is comprised of six orders dealing with every area of Torah law. In subsequent centuries, the Talmud was compiled to advance and develop the Mishnah.

The study of Talmud has become central to all study of Jewish law and Torah values, and many thousands of rabbinic works have been written based on the Talmud. As such, the Talmud and its commentaries is a bridge spanning the millennia of Jewish life – sustaining and building our people through the good times and the challenging ones.

The Mitzvah of Torah Study

Every Jew must study Torah daily.3 No matter how busy a person is, he must dedicate some time for this important undertaking.4

It is the responsibility of every Jewish man to know all of the Written and Oral Laws.5 Additionally, he is responsible to utilize all of his free time in the pursuit of understanding God's will.6 Judaism is all about personal growth and acquiring wisdom. The Torah is our medium for this noble pursuit.

The obligation to study Torah is not limited to the practical laws. Even those sections that do not directly relate to today's world, and even those that are totally theoretical in nature, must be studied, as they are expressions of God's will.

A woman's obligation to study Torah is limited to the practical and immediately-pertinent parts of Torah.7 This provision allows a woman to utilize her own skills in the application of Torah, and also frees her time to express her natural role as a woman. (For more on this, see Women and Mitzvot.)

Every father is obligated to teach his son Torah.8 If he is unable to do so himself, he must hire others to do so.9 Further, it is the obligation of every Jewish community to ensure that there are proper institutions to teach children Torah.10

What about the person who has limited time to spend on Torah study?

The Sages tell us that two of the tribes, Issachar and Zevulun, shared a partnership. The members of one tribe were involved in full-time Torah study, while the members of the other financially supported their scholarly cousins. They shared equal reward for the Torah study because the scholars could not have accomplished without the support of their benefactors.11 By supporting Torah scholars and institutions of Torah study, everyone can become a partner in upholding this central pillar of Jewish life.

There is a special mitzvah to venerate Torah scholars. We do this by serving their needs, and by lightening their financial burden. By doing so, we demonstrate our respect for the Torah itself. In fact, this is how we can fulfill the mitzvah of cleaving to the Almighty.12

Torah is God's word and its study requires an appreciation of its gravity. This does not exclude the use of humor; on the contrary, great scholars started their Torah lectures with jokes in order to capture the attention of the class.13 But when studying Torah, there is no place for lightheadedness or frivolity.14

Moreover, intellectual honesty is critical to success in Torah. One of the most crucial aspects of Torah study is that it challenges our assumptions. Don't allow yourself to be blinded by preconceived notions. Open your mind to novel ideas and new vistas. When something doesn't make sense, grapple with it. Ask questions. In the Torah world, the only foolish question is the one that remains unasked.

Since the Torah is sacred, it may not be studied in the presence of something unclean or a bad odor.15 Certainly, one may not study Torah in a bathroom.16 In fact, even if a person feels the need to relieve himself, Torah study is inappropriate.17 One should also not learn Torah in the presence of others who are immodestly dressed.18

In order to help us appreciate the specialness of Torah study, we recite two blessings.19 These blessings are said when we wake up in the morning, and they remain in effect until we go to sleep at night.20 This is because a Jew regards his entire day as part of a Torah growth experience. When he eats, sleeps or is involved in business, it is all part of the growth process. Thus, only one series of blessings is said each day.

Even if a cat-nap is taken during the course of the day, new blessings are not recited.21 However, according many opinions going to sleep in bed during the daytime is considered a 'break' that obligates new blessings.22

There is no sense of satisfaction that matches that of Torah study, and a special pleasure comes from completing a portion of Torah. Thus it is a mitzvah to make a siyum (celebratory meal) to celebrate the completion of studying a Torah work.23

A siyum may be held for the completion of a biblical book,24 or tractate of Mishnah or Talmud that was studied intensely for an extended period of time (as opposed to casual reading).25 A special text, called "Hadran," is recited at the siyum, acknowledging the special opportunity of Torah study and praying for more such opportunities.

Ideally, the siyum should be attended by at least ten adult males so that a special Kaddish can be said.26 This celebration is considered so significant that even during the days that we are forbidden to eat meat because of our mourning the loss of the Temple,27 it is permitted to eat meat at a siyum.28

The custom is that as soon as we finish one Torah book, we immediately begin another, lest we rest on our laurels and neglect to grow further.29 Moreover, it demonstrates our fondness of the Torah, showing that we can never get enough of it. The same idea is practiced every year on Simchat Torah, when we complete the Book of Deuteronomy and immediately begin reading Genesis.

In 1923, Rabbi Meir Shapiro of Lublin (Poland), initiated a program of daily Talmud study called Daf Yomi. Today, tens of thousands of Jews study the "daily daf," and every seven-and-a-half years a siyum of the Talmud is held with large celebrations in Madison Square Garden and other locations worldwide.

What are Tefillin?15 min read

Jewish Laws and Customs of Pregnancy and Birth8 min read

What is Kosher Food?13 min read

Judaism's Golden Rule: Love Your Neighbor as Yourself12 min read