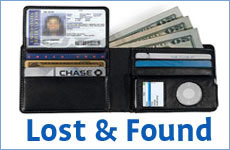 "Finders keepers, losers weepers" is not a Jewish concept.

"Finders keepers, losers weepers." As children, that may have made sense... as long as we were the "finders." But to the poor fellow who lost his wallet or precious memento, his loss was a tragedy.

By contrast, the Torah tells us:

If you see another person's animal, you shall not hide from it; you must return it to the owner. If the owner is not known to you, then you should bring the object into your house, where it shall remain until the owner inquires after it, and you will return it to him. So shall you do for his donkey, his garment, or any lost article that you may find... 1

The Torah system requires that in most cases, we are expected to seek out the owner and return the lost item.2 Even if the lost object is insured, the owner must still be sought out and the object returned.3

The Torah adds a deeper dimension: "You shall not hide yourself from it." This precludes the option of pretending not to see a lost object and passing by without picking it up.4

If it appears that the item may have been placed down intentionally, it should not be removed, as the owner is likely to return to look for it.5

The key factor with lost objects is the issue of the "siman." A siman is an identifying mark by which the true owner of the item can be determined. Anything that does not have a siman (such as money) may be kept by the finder, if it is obvious that it was not left there intentionally (on the assumption that the owner realized his loss already).6

What is an acceptable siman, identifying mark? Anything that is: 1) not standard for this type of item, and 2) only the owner is likely to know about. For example, initials that are scratched on the handle of an umbrella or a blue ink stain on a walkman.

Sometimes, the precise location where the object was found can be considered a siman, if this is an atypical place for it to be.7 If an item is found in a public place without any siman, the finder may keep it.8

It is a good idea to post signs in schools, synagogues, etc., informing people that any item which is left on the premises for a certain period of time becomes subject to the discretion of the caretakers to do whatever they please.9

The Talmud tells the story of how chickens once strayed into the yard of Rabbi Chanina Ben Dosa. Rabbi Chanina thus became obligated to care for the chickens until their owner could be found. The chickens laid eggs which hatched into chicks – and soon Rabbi Chanina's property was overrun with a whole flock of chickens! In order to consolidate, he traded all the chickens for a few goats.

Through careful observance of the mitzvah, Rabbi Chanina had multiplied the wealth of the original owner of the chickens. By the time the man came to stake his claim, he was the proud owner of an entire herd of goats. 12

The finder should publicize the find to the best of his ability.13 This may include hanging signs in the area or in public places nearby,14 as well as putting ads in the newspapers.15 The announcement should only describe the item, without revealing the siman, since this will be the method by which a claimer can be established as the legitimate owner.16 The key is to divulge enough information about the object so that the owner will know it refers to him, but not too much that someone could unscrupulously come and falsely claim the object.

In the interim, the item may not be used,17 and it must be cared for and kept in a safe place.18 However, if it gets lost or stolen, the finder is exempt.19

What happens if no one comes to claim the item? The Sages say that you must hold onto it until Elijah the prophet comes and identifies the rightful owner.20

Of course, this can get very burdensome. So once it becomes evident that an item is not being claimed,21 it is permitted to sell it and put the money aside to be returned to the owner.22

Even the finder may buy the item by putting aside the monetary value to be given to the original owner. In either case, the details of the item should be recorded, including the specifics of the item,23 where and when it was found, and the amount of money for which it was sold.24

The mitzvah to return lost items extends to property or possessions that are in danger of being destroyed or lost. For instance, if your neighbor's house is about to be flooded – and he's not home – then you are required to set up sandbags. (You could later ask to be reimbursed.)28

This mitzvah applies not only to material objects that were lost, but also to intangibles. For instance, if someone is not talking to a friend because of an argument, we should try to help restore the relationship.

If someone is drowning or in other physical danger, rescuing them is also included in this mitzvah – you are restoring to them life!29

Similarly, if someone has fallen away from Judaism, we must do what we can to restore his connection to God and Torah.30

What is a Mezuzah?
For Every Individual, A Torah Scroll
Allegiance To The Monarch
Meet the Real You: Yom Kippur
Comments
MOST POPULAR IN Jewish Law
Our privacy policy
Aish.com Is Looking for Great Writers