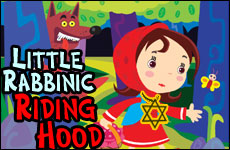 …and other Jewish children’s stories.

Who among us does not have a place in our hearts, minds and souls reserved for fond memories of the children’s stories that were read to us and that we read to ourselves? Okay, yes, there’s one guy in North Dakota who doesn’t, but he’s always been a Gloomy Gus and is dealing with a number of other emotional issues, so if it’s alright with you, we won’t count him.

For the rest of us, though, children’s stories offer us entertainment, education, comfort, insight, excitement, laughter and tears. They’ve provided us with just about everything, with the exception of one very important feature – a Jewish perspective.

Until now. Ladies and gentlemen, Jewlarious followers, fellow Chosen People – after three years of grueling research and writing, and a stress rash I had taken care of at the dermatologist’s office, I am excited to announce the publication of my new book, “Nu? Tell Me a Jewish Story: Jewish Versions of the Most Popular Children’s Stories.” Here is a preview.

The Mohel and His Wife

Based upon The Cat in the Hat, by Dr. Seuss

Then we saw him take out his knife!

And we saw him!

The Mohel and his wife!

And he said to us,

"Where is that sweet little child?"

"I know it looks scary

But I’ll do it mild.

Based upon Alice’s Adventures in Wonderland, by Lewis Caroll

While goyishe Alice got into trouble eating a cake labeled “eat me,” our little yiddishe mamma, Rivkah was smarter than that. You see, she saw a pickled brisket that said ” Taste me,” but the wise little Rivka was not going to do that in a hurry. 'No, I'll look first,' she said, 'and see whether it's marked "Treif" or not'; for she had read several nice little histories about Jewish children who had gotten very sick eating food that was not prepared according to the regulations of the Jewish Halakhic framework.

They’d gotten sick because they would not remember the simple rules their teachers and family had taught them, such as avoiding the presence of ingredients derived from non-kosher animals or from kosher animals that were not properly slaughtered, a mixture of meat and milk, wine or grape juice produced without supervision, the use of produce from Israel that has not been tithed, or even the use of cooking utensils and machinery which had previously been used for non-kosher food.

However, this food was not marked 'Treif,' so Rivka ventured to taste it, and finding it very nice, (it had, in fact, a sort of mixed flavor of brisket, kishke, blintzes, chopped liver, latkes, knishes and tzimmes) she very soon finished it off.

'What a curious feeling!' said Rivka; 'I must be shrinking like my allowance.' And so it was indeed: she was now only ten inches high, and her face brightened up at the thought that she was now the right size for going through the little door into that lovely deli where at long last she might find her beloved matzoh brei.

Based upon Little Rabbinic Riding Hood

By-and-by, Little Rabbinic Riding-Hood reached her grandmother's house, and tapped at the door.

"Come in," said the wolf, in a squeaking voice. "You must be exhausted from all that shlepping."

"If you please, granny, mother has sent me with some bagels and lox and other treats."

But when Little Rabbinic Riding-Hood saw the wolf she felt frightened. She had nearly forgotten her grandmother, but she did not think she had been so ugly.

"Grandmother," she said, "what a great nose you have."

"All the better to smell that herring in cream sauce you brought, my dear," said the wolf.

"And, grandmother, what large ears you have."

"All the better to hear you sing me “Bei Mir Bistu Shein,” my dear."

"Ah! grandmother, and what large eyes you have."

"All the better to read my Torah portion for the day, my dear," said the wolf, showing his teeth, for he longed to eat the child up.

"Oh, grandmother, and what great teeth you have!" said Little Rabbinic Riding-Hood.

"All the better to eat you up with," growled the wolf, “and I think I’ll start with your pulkes, you schlimazel!” Jumping out of bed, he rushed at Little Rabbinic Riding-Hood, and would have eaten her up, but just at that minute the door flew open, and a great dog tore him down. The wolf and the dog were still fighting when Mendel, the mohel, came in and killed the wicked wolf with his circumcision knife.

Based upon Harry Potter and the Chamber of Secrets

October arrived, spreading a damp chill over the grounds and into the delicatessen. Madam Pomberg, the career waitress, was kept busy by a sudden spate of Tay-Sachs Disease among the diners and students. Her chicken soup potion worked instantly, though it left the drinker whining and nagging for several hours afterward. Ginny Weaslovsky, who had been looking pale, was bullied into taking some by Shlomo. For the next four hours, she proceeded to hock him about doing something meaningful with his life.

Raindrops the size of knishes thundered on the deli windows for days on end; the lake rose, the flower beds turned into muddy streams, and Hagberger’s matzoh balls swelled to the size of torahs. Oliver Woodstein's enthusiasm for regular training sessions, however, was not dampened, which was why Heshie was to be found, late one stormy Saturday afternoon a few days before Shemini Atzeret, returning to Gryffinowitz Tower, drenched to the skin and splattered with shmaltz.

Even aside from the rain and wind it hadn't been a happy practice session. Mordechai and Yitzchak, who had been spying on the Blatburg team, had seen for themselves the speed of those new Menachem Two Thousand and Ones. They reported that the Blatburg team was no more than seven greenish blurs, shooting through the air like matzoh missiles.

As Heshie squelched along the deserted deli he came across somebody who looked just as preoccupied as he was. Nearly Hopeless Hershel, the ghost of Gryffinowitz Tower, was staring morosely out of a window, muttering under his breath, ". . . can’t even prepare a proper tzimmes . . . and don’t get me started on the pastrami . . ."

"Shalom, shalom," said Nearly Hopeless Hershel, starting and looking round. He wore a dashing yarmulke on his long curly hair, and a tallis with ruffles, which concealed the fact that his neck was almost completely severed. He was pale as smoke, and Heshie could see right through him to the dark sky and torrential rain outside.

"So, what else is new?" said Hershel.

New Release: Evil Kanevilstein and the Jewish Daredevils
The Promise Of The Land
Which Chat Are You On?: Parshas Behar/Lag Ba’Omer
Do You Like Slow-Cooked Food? Thank the Jews
Comments