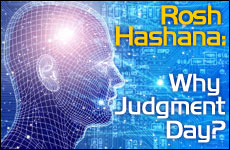 God's memory and the substance of eternity.

Although Rosh Hashana is correctly translated as "the beginning of the year," this term is nowhere to be found in the Torah. Only the Talmud refers to it as such. Even the prayers, whose earliest source stems from the Talmudic era, don't refer to it as Rosh Hashana, but rather as "Yom Hazikaron" – a day of remembrance.

Besides neglecting the all significant beginning of the new year in our prayers, there also seems to be something rather vague in the term "day of remembrance." It nominally refers to the fact that on Rosh Hashana we are judged by God, therefore He needs to dredge up all our past deeds. While this is true, it still does not seem to justify calling Rosh Hashana as the "day of remembrance." Could we imagine calling a courtroom "the witness podium" because witnesses testify in court? The witnesses are but one element in the trial. So, too, memory is but one element in God's judgment. Why is it the most specific title of Rosh Hashana?

Why is Rosh Hashana called 'a day of remembrance'?

To understand this we need to take a deeper look at memory and all its implications. Memory itself appears on two levels. There is a technical memory which 'remembers' particular observed phenomena, i.e. the pothole in the road, the cheap take-out place etc. This is an ability shared with most living organisms. An earthworm might 'remember' which pathway had food at its end and which had a rather nasty electric shock.

But this is not the 'memory' that we are considering on Rosh Hashana. The 'memory' that we are talking about is the conversion of an ephemeral event to something that becomes permanent – as permanent as the person and his soul. The higher memory that we posses is not mere information that is on record in our hard drives. Rather, it is who we are and what we are. Animals, to the best of our knowledge, do not have this type of 'memory'. One of the most painful sights to behold is a person with Alzheimer's. Although at a certain stage he can still experience events in the present and may even be 'intelligent,' his loss of past has uprooted part of his essential self. A person who exists only in the present is not a fully functioning human being.

Memory also acts as a filter. The trivial and irrelevant are filtered out, and memory retains only that which we feel is akin to 'ourselves.' It chooses to include various events into our essence and to reject the rest as trivia.

Man is unique in the universe in that only he posses 'zikaron' – higher memory. When the angels complained to God about mankind's creation, they voice it as a specific complaint against his being included in the realm of memory. Thus the verse says, "What is man that you remember him" (Psalms 8).

If we extend this description of memory to God, it means that our deeds that make it to God's memory are of lasting significance, while those that do not are gone as if they never existed.

God's judgment on Rosh Hashana is far more profound than common judgment. He is not only looking to see if our activities are meritorious or not, He is measuring our deeds in the perspective of eternity. Those actions that are noteworthy then become part of God, so to speak, and the others evaporate, as if they never existed.

Thus Rosh Hashana is a day of judgment on who will enter this most exclusive club of eternity along with which deeds, and what is to be discarded.

We usually think of our actions as being either good or bad. But in a certain sense, there is an even worse option than bad: namely meaningless.

As we reflect back on our year and think ahead, we need to pay attention to the core quality of our activities: what has been their significance? Imagine having lived a lifetime of activities, and as we stand before God on the ultimate day of judgment, most of our lives are relegated to the heap of the "insignificant". In a sense, we thereby lose parts of our very 'selves,' a sort of self-caused Alzheimer's.

Thus we pray to God, "remember us for life." Let our life be part of the "conscious" of the One Eternal. On the day that man was created, he is judged by a standard that only God is capable of: Eternity.

Why It's So Important for You to Judge Others Favorably

Judaism Is Radical
Lessons from the Book of Jonah
Where Are We? The Body, Brain, Soul Problem
Dr. Sheila Nazarian’s Escape from Iran
Comments
MOST POPULAR IN The High Holidays
Our privacy policy
Aish.com Is Looking for Great Writers