Visiting the Sick in Corona Wards 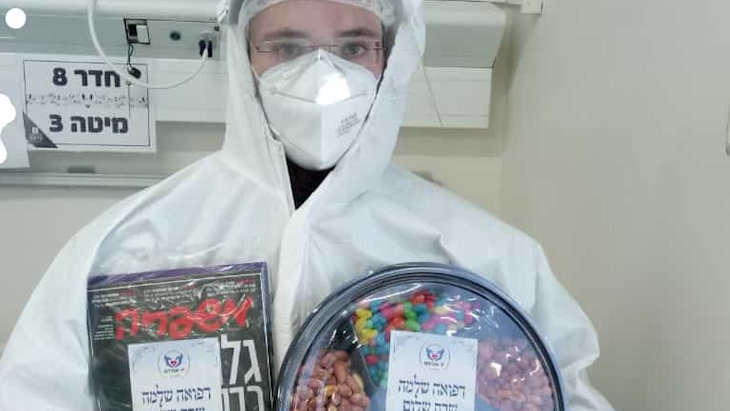 Volunteers who have recovered from corona are shattering the isolation of those currently in hospital wards.

In a world first, the Hadassah Ein Kerem Hospital in Jerusalem has opened its tightly secured corona wards to dozens of volunteers who have themselves recovered from the virus in order to visit the sick and lift their spirits.

Israel’s corona wards are under strict controls with nurses and doctors careful not to expose themselves to the patients, mainly monitoring their patients from monitors. 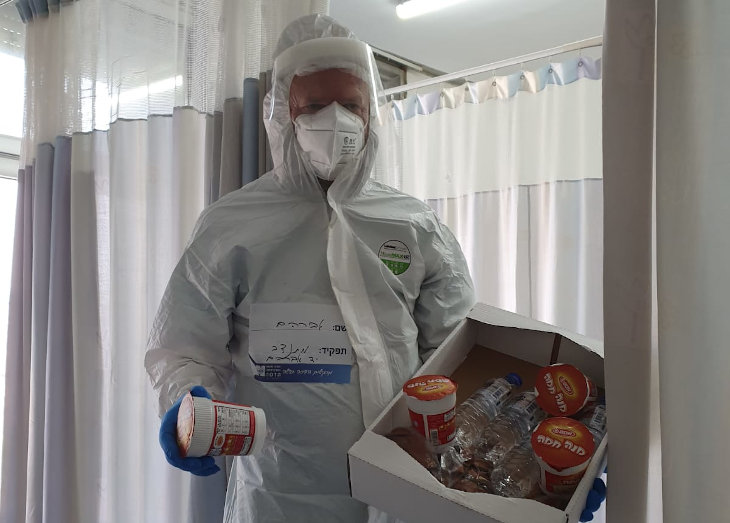 Rabbi Shimon Braun, who heads the Yad Avraham organization that has provided medical assistance and hospital visits for 20 years, told Aish.com, “We saw in the first wave of the pandemic that the doctors and nurses were working tirelessly, and they weren’t able to spend time helping patients with things that visiting friends or relatives would usually do.”

The organization, based in Jerusalem, began by asking families to cook hot food that they could deliver to the wards, especially for Shabbat.

“As things moved on, we desperately wanted to do something more to help. Visiting the sick strengthens a person’s will to recover, and it was missing.”

On learning that those who recovered from corona had antibodies that would largely protect them, Rabbi Braun asked for a meeting with Professor Zeev Rotstein, the Hadassah Director and asked if the hospital would let the recovered corona patients into the wards. His answer came right away. 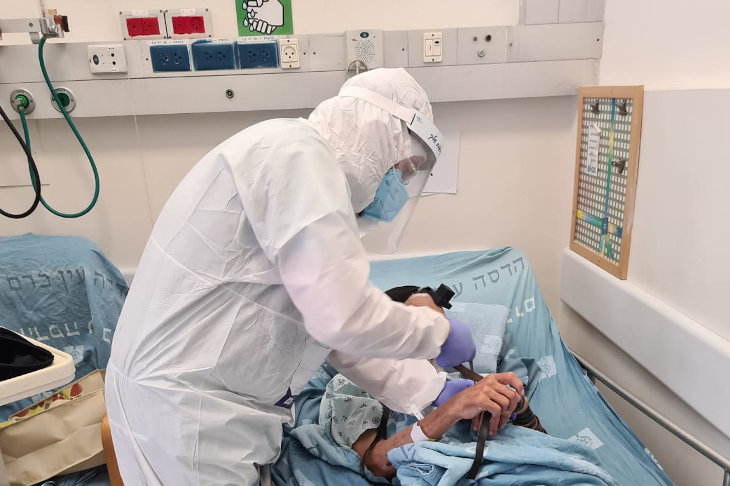 Helping a patient put on tefillin

“As long as they were aware that there could be risks, Professor Rotstein immediately saw the benefit that visitors could make.”

Yad Avraham put out the call to volunteers to step forward and within days a small team was formed, a team which now numbers over 30. “Working in two shifts, the whole week long, they ensure the wards always have visitors.”

Moshe Tauber, 22, from Jerusalem was one of the first to receive a call from Yad Avraham. Both he, his wife and daughter were sick with the virus around Passover. “We knew how tough it is, how weak you feel, and how disconnected you are in isolation,” he told Aish.com. “We both decided that we would help.”

Tauber had previously been asked to donate plasma for research into therapies against the disease. Once confirmed that he was armed with antibodies against the coronavirus he was given extra vaccinations by the hospital and within hours the doors to the corona wards were opened. Tauber found himself on the front line in Israel’s fight against Covid-19.

“It is a tough situation, but I could see straight away the light it brings to people’s faces to receive a visitor.”

Volunteers enter the rooms with full personal protective suits and spend time with the patients throughout the day attending to a variety of their needs. 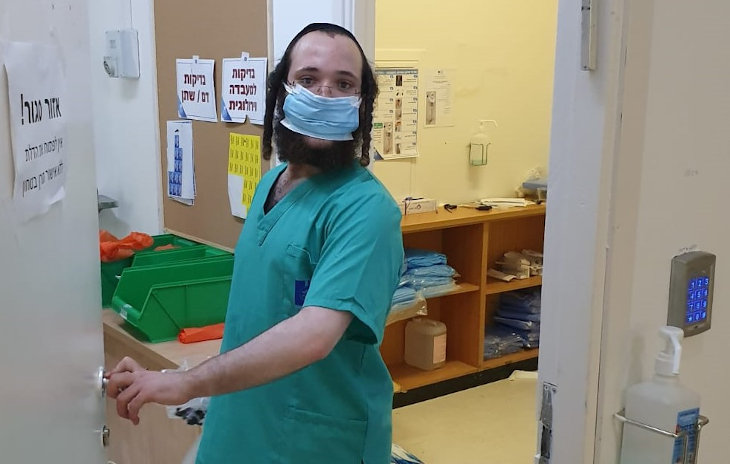 Moshe Tauber has been volunteering for weeks

“Some patients are too weak to eat on their own and need help. There are also elderly patients who can’t operate a phone to call family members, and some who were just too weak to do so.”

Tauber used a mobile phone to dial video calls using skype for patients to see and speak to friends and relatives.

“In one case an elderly woman told me that her husband was also hospitalized at Hadassah, but in a separate ward as he was receiving dialysis treatment. I would wheel her to him to visit and spend time together. Sadly he passed away, but he was able to spend precious time with his wife, and he wasn’t alone.”

For patients who want to pray but are too weak, Moshe and the other volunteers help them put on tefillin.

Moshe says giving patients the strength to believe that they can pull through makes volunteering in the wards so essential. “To hear from someone else that they have been through this, that they understand how weak and sick they feel, but that they pulled through it, can really make the difference between life and death.”

“‘Just another day or two and it will pass,’ I tell them, and you can see a smile come back to their faces.”

“Despite being surrounded by so much sickness, there is a positive feeling that comes from seeing the difference it makes and just knowing that you are doing a mitzvah like this. It also gives me a lot of strength.”

Preparing for the holidays

Over Rosh Hashanah, the volunteers geared up to ensure that the patients in Hadassah’s four corona wards had everything they need for the holiday. Apple and honey, someone to recite kiddush, and to hear the shofar.

“It’s complicated,” Tauber explains, “because volunteers can’t remove face masks in the wards, but we were able to leave the doors to the wards open while the shofar was blown outside.”

CNN and BBC covered the Yad Avraham volunteer. “You have no idea what kind of kiddush Hashem, sanctification of God’s name, this is,” Rabbi Braun said. “People are coming into hospital totally alone, frightened and scared and they are weak. Visiting the sick is a precious mitzvah, and it saves lives by helping patients and giving them support. It is impossible to describe the difference this is making.” 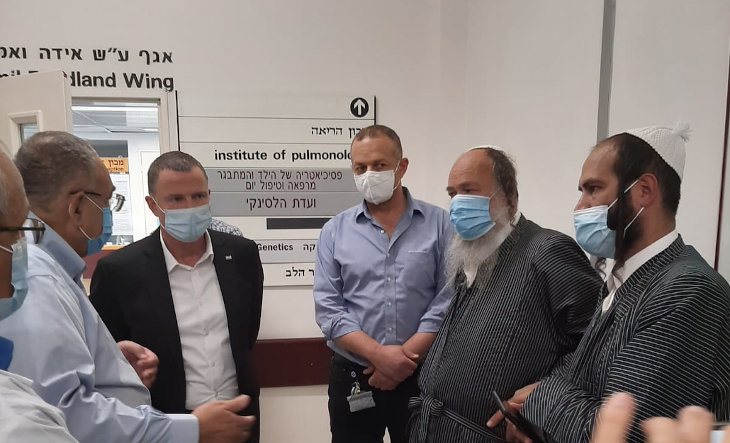 Hadassah is trying the initiative for two months, with Yad Avraham hoping other hospitals in Israel will open their doors to allow visits to those sick with corona, and perhaps other countries will be inspired to follow too.

“As long as I can do this, I will,” he says, “I feel a sense of mission to help. My grandfather, Rabbi Avriel Tauber used to say, when you find a personal mission in life, give it everything you can.”

Our Family’s Aliyah: A Video Diary

How Can You Defend Israel?

Only in Israel
Bechukotai 5782: Divine Retribution
Behar 5782: Working to Live or Living to Work?
The Wholeness of Being Broken
Comments
MOST POPULAR IN Israel Diary
Our privacy policy