A tribute to Rabbi Nosson Tzvi Finkel, zt"l, one of the greatest Jewish leaders of our generation.

Last week, the Jewish world was plunged into mourning with the passing of my esteemed brother-in-law, Rabbi Nosson Tzvi Finkel, zt"l, one of the greatest leaders of our generation.

Rav Nosson Tzvi was the rosh yeshiva, dean, of the Mirrer yeshiva, the world's biggest yeshiva that housed seven and a half thousand students. If you caught a glimpse inside the walls of the beis medrash, the study hall, chances are you'd be overwhelmed and baffled with thousands of men intensely talking, yelling, arguing and debating, expressing Torah study in its purest and most energetic form. 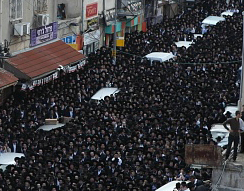 In order to grasp the meaning and impact of this Torah study, allow me to try to capture a moment in the life of Rav Nosson Tzvi Finkel, the one person who probably swept more people into that orbit of excitement than any one else in our generation.

Maimonides tells us that God is extremely sparing in miracles and only performs them as per need. Not only is He sparing in performing them, but they are perforce of short duration. Yet, the Talmud teaches us that of all the accoutrements of the temple, there was one that had a constant and seemingly unnecessary miracle accompanying it on a steady basis. That was the ark, that as heavy as it was it "lifted up those who carried it." It was the ark that carried those who carried it – an impressive miracle but certainly not necessary.

The answer must be that this miracle comes to teach an essential truth about the ark and the Torah that was inside of it.

The ark is initially lifted by human efforts, but once hoisted it pulls up the person who is holding it.

To get a sense of the nature of this truth, let's use the body/mind as an analogy. The body is an absolute prerequisite for the mind. Without "gray matter," blood circulating and glucose and oxygen nourishing the brain, there could not be a mind. Yet once the mind is in place, it is capable of rising above seeming limitations of the body. If a person is inspired, if he "sets his mind to it," he can accomplish seemingly impossible tasks. It is as if the person's mind has become the master over the body, rather that its dependant. This is true of the mind and body and is sweepingly true of the spiritual and material.

This is what the ark's miracle produces. Yes it is initially lifted by human efforts, but once hoisted it pulls up the person who is holding it. It was not a needless miracle; rather it was an external demonstration of the core truth about the material/spiritual relationship. The relationship starts with material establishing the spiritual, but if that which was established is genuinely spiritual, then it ends up lifting up the very pedestal it is standing on.

Related Article: A Blanket of Trust

This is Torah in its most pristine form. It is a struggle to establish the necessary logistics for its study. It is an emotional struggle to rivet oneself for such long hours and it is an intellectual struggle to encompass the material, analyze it and clarify it. But as one gets into it, the roles become reversed; Torah itself lifts high the person and infuses him with an incredible energy and drive to continue.

We are not privy to many miracles these days, but Rav Nosson Tzvi Finkel embodied this miracle. From his earliest years at yeshiva he was always immersed in study. Days and nights melded into one as he plugged away hour after hour into the wee hours of the night. We witnessed a very powerful person blessed with inhuman strength. Twenty-one years ago he took over as the head of Mirrer yeshiva that then had one thousand students. In addition to the constant studying and teaching, he had to raise incredible amounts of money, and attend to all administrative issues of the yeshiva. A difficult enough task for any one, but for Rav Finkel, it would require a miracle: by this time Parkinson's was ravaging his body and robbing its vaunted strength.

When most would people would understandably curtail their undertakings, Rav Nosson Tzvi chose to increase the yeshiva seven fold.

When most would people would understandably curtail their undertakings, Rav Nosson Tzvi chose to increase the yeshiva seven fold [!] and commensurately to increase his teaching, fundraising and administration. One would watch him rise to speak, held up by two people, his voice barely audible. And as he began to speak, he would fill with energy, his voice would boom, and he seemed to stand on a cloud of air.

An individual would come in to speak to him and share a moment of joy or a span of anguish. Rav Nosson Tzvi would be sprawled on the couch, with barely an ounce of strength, and he'd motion the person to speak. As he began absorbing the individual's joy or sorrow, he would slowly fill with energy, rise and sit up, comforting the one in need, or sharing in the joy of the fortunate.

Many times he would be wiped out, unable to fundraise. And then he would think of an idea that would greatly enhance the quality of yeshiva's studies, or someone would present him with such an idea. Slowly he would become energized and fired up, and begin the arduous task of fundraising for the new endeavor.

But if one needed to pick a moment, a snapshot of the ark being lifted by the Torah it would have to be this: Rav Nosson Tzvi's most uplifting holiday was most probably Simchas Torah, the day of joy upon completing a cycle of the Torah reading. The yeshiva students would dance away hour after hour, expressing their profound joy at being privileged to so intensely study the Torah. Rav Nosson Tzvi would watch intently, absorbing it all. At some point one of the students would begin singing Rav Nosson Tzvi's favorite song: "Fortunate is the one who toils in Torah." His eyes would begin to burn fiercely; he would lift himself up and slowly begin dancing. He would hold onto two students for stability and slowly they would begin to feel him pulling them along, higher and higher, as if he and they had become unfettered.

Fortunate indeed is the one who toils in Torah.

My Victory over the Nazis