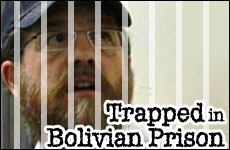 Jacob Ostreicher suffers the fallout of a broken justice system. You can help.

UPDATE: In December 2013, Jacob Ostreicher was released from Bolivian prison.

Occasionally you hear a story so outrageous, so contrary to normative standards of freedom, that it almost defies belief.

Jacob Ostreicher is a 53-year-old New Yorker who went to Bolivia in South America to manage a rice factory. One of the factory owners was investigated on criminal charges, and the next thing Jacob knew, he was thrown into prison.

Not just any prison, but the notorious Palmasola prison, where rapists and murderers run the prison – and anyone not toeing the line becomes subject to their whims.

Even more scandalous is that no charges have been filed against Ostreicher. His family believes that the Bolivian government singled him out as an American and is essentially holding him ransom for a large sum of money.

See more info at this CNN article, and at freejacobnow.com.

You can help your brother. Sign the petition asking the White House to directly intervene to secure Ostreicher’s freedom.

TV or no TV1 min read