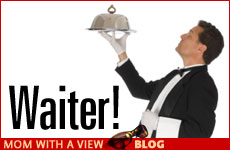 No matter the job, we all have the opportunity to infuse it with value and dignity.

The most frequently emailed piece the other day in the New York Times was the first of a two-part series entitled “100 Things Restaurant Staffers Should Never Do” by Bruce Buschel. Many points were focused on overly familiar behavior on the part of the waiters: “Do not call a guy a 'dude'” or “Do not announce your name. No jokes, no flirting, no cuteness.”

And many were on treating the customers with respect and dignity: “Do not make a singleton feel bad." "Do not say, 'Are you waiting for someone?'” or “Do not compliment a guest’s attire or hairdo or makeup. You are insulting someone else.”

It was the latter point (although I don’t really like it when the waiter calls my husband and me “guys”) that got me thinking. While some jobs may be more inherently meaningful than others -- certain types of doctors, researchers, spiritual leaders, for example -- we all have the opportunity to infuse whatever task we undertake with value and dignity.

I don’t mean the false formality of the stereotypical English butler. I mean we can behave with self-respect and decency. We can carry ourselves like sons and daughters of the King, whether we are running a corporation or waiting tables, whether we are arguing a case in court or changing a diaper.

Early in the Torah we read the brief story of Chanoch who went to Heaven without ever having sinned. His was a simple task; he was a shoemaker. But he infused his work with holiness and with commitment to the words of the Almighty.

Not only does the dignity with which we behave lend the job itself dignity, but every type of employment has its unique ethical challenges.

The status awarded by society to the job is irrelevant. How we act is what counts.

Waiters and waitresses have opportunities to steal and cheat and behave in mean and vengeful fashions (we’ve all been terrified by those stories of spitting on the food), as do CEOs of large corporations and your average sanitation worker. Everyone faces temptation.

Doing our jobs with dignity and poise is perhaps the most important career move of all.

With the recognition that we are created in the image of the Almighty, coupled with a strong moral compass, we can emerge unscathed. But it’s not easy. The challenges are constant, the rules in flux.

Within every job there is opportunity for improvement, for greater accomplishment, greater creativity, greater quality of result. The exact nature of the work doesn’t matter. Our exact nature and attitude do.

There are no excuses. The fact that customers don’t always act so nicely themselves is not an excuse. We are all responsible for our own behavior.

Because so many of us eat out with some regularity -- whether in fancy dining establishments or the local pizza shop -- we have numerous opportunities to test ourselves, to observe how we treat those serving us, and to improve where necessary.

Some of us have even been on the other side and understand the need for guidelines for wait staff, and even appreciate having them. Everyone really does want to behave properly and everyone wants to be appreciated. Maybe that’s why this was the most emailed piece.

Doing our jobs with dignity and poise, while at the same time not violating our ethical standards, is perhaps the most important career move of all.

If You Really Loved Me...

Understanding of the Heart