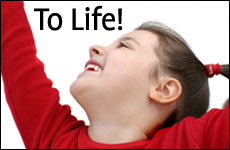 Self-Talk of Persistence and Perseverance

People Who Make You Feel Good About Yourself

I'm sure you must have your own -- sometimes painful -- examples to remind you that life is not to be taken for granted. Well here's one more.

When I arrived in Israel in 1999, I was set up with an adopted family. They lived around the corner from where I was studying -- four kids, one dog, lots of warmth and a split-level house. A home away from home. A place that I could go to for borekas, for lazy weekend mornings, to practice my beginner's Hebrew with their three youngest kids -- aged 1, 3 and 8 -- who didn't know English yet, and to be one of the family.

I didn't have to struggle talking in Hebrew with 12-year-old Mali, their eldest daughter; she spoke the most perfect English. Mali was talented at lots of things. I remember being shown her school report with everything from Arabic to Torah studies scoring high; I marveled over her beautiful arts and crafts projects and was impressed at how capably she looked after her younger brother and sisters.

I wasn't intending to lose touch with the family. But, as they say, life happens. It's easy for people who aren't in my e-mail address book to fall by the wayside. The family used to tack my postcards and drawings for the kids on to the fridge. But when I left Israel and my Hebrew got rusty, the thought of writing a postcard in another language seemed like hard work.

I had a couple of friends who got adopted by the same family at a later date, so I got reports on them once in a while and we'd all agree on how amazing they were. One set of friends got married in Jerusalem last autumn and invited the family along to the wedding. When I watched the wedding video, I got to see the parents six years older (still looking delightfully the same!) and Mali, now 18, filled out and grown up.

News trickled through that Mali, last spotted dancing in the wedding video, had been having stomach pains and vomiting. The doctor diagnosed cancer.

At the beginning of this year, the news trickled through that Mali, last spotted dancing in the wedding video, had been having stomach pains and vomiting. The doctor diagnosed cancer and aggressive chemotherapy began. I got news back via mutual friends that she was "stable," "doing as well as expected," "seemed weak, but okay." Since hearing the news, I kept on promising myself that I'd send a teddy bear, a letter, flowers, something. But... life happens... and somehow despite meaning to, I didn't.

A mutual friend called tonight saying, "I have some sad news." I wasn't expecting to hear what I heard, but Mali died yesterday.

It's a strange thing to hear that someone who I knew as a skinny, alive, socially and academically gifted 12-year-old died just as she was entering adulthood. The words "unfulfilled promise" come into my head. But then again, I don't know how she used the last six years of her life. Maybe she did everything in them that she was meant to do in this lifetime.

It's also strange to think that someone can be dancing joyously at a wedding in October, go see a doctor a couple of months later and get diagnosed with something that will see them dead before summer is out.

The strongest thing I am taking away from this is that life is short, so seize the day. And I'm sure you must have your own -- sometimes painful -- examples to remind you that life is not to be taken for granted.

I received some junk e-mail about 10 minutes before the call on my mobile and it was bizarrely called "101 things to do before you die." It listed seven.

1. Climb to Everest base camp.
2. Run a marathon.
3. Buy flowers for a complete stranger.
4. Go snorkeling in the Galapagos Islands.
5. Learn Spanish.
6. Do a cooking course in Tuscany.
7. Get married in Vegas.

They may not be the right seven for you or me (although I like the idea of buying flowers for a stranger and anything involving a hint of travel is fun).

But the message is the same. Carpe diem. Love life, love each day, go for it, make it count.

The Jewish tradition says it is a good thing to do some special, kind, charitable act in memory of one who has died as it elevates their soul. So if you feel inclined to dedicate a good act in Mali's memory that will be lovely. And please also use her short life as a reminder to go out there and do special things with all of your days -- as the saying goes, this is the real thing, not the dress rehearsal.

Sam Cowan is the editor of the anthology "what i want to tell you from the heart" ISBN 1-905166 50 8. To order go to www.sam-cowan.com. She is still waiting for the right moment to buy a stranger flowers, but promises to seize the day and do it!

"Each and Every Day, In Every Way, I Keep Upgrading Myself"1 min read

I Can't Get No Satisfaction... Sometimes1 min read