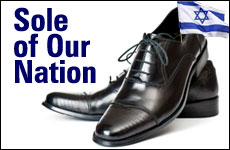 Why I love living in the land of Israel.

This past Rosh Hashanah eve, my teenage son realized that he needed a new pair of shoes to wear to synagogue. As if I didn't have enough to do.

"Not today," I said. "I don't have time. Candle lighting is in six hours."

My son held his shoes up in the air. They had no soles.

I sighed. Then I gave him our credit card and my cell phone.

"Go ahead. Please buy something reasonable." I thought of the latest Israeli shoe styles for boys his age pointed at the ends like arrows. "Nothing that could gouge anybody's eyes out, okay?"

He nodded. I trusted him. We both felt good.

Two hours later, I watched my son coming down the stairs to our apartment through my kitchen window. I waited for him to come inside, but he didn't. I walked out the front door and saw him slouched against the wall, knees curled to his chest, tears damp on his white cotton shirt. I crouched down beside him.

I coaxed him until the story came out. Turns out somewhere between picking up my husband's glasses at the optician, and the shoe store, his wallet had disappeared, along with our credit card.

He calmed down. Then he eked out a smile.

"So you want to see my shoes?"

I cocked my head to the side. "Your shoes?"

"Yeah." He began fumbling with a salmon colored box, the tissue paper crinkling between his fingers. "I had already picked out just the pair I wanted and I was about to pay. That's when I realized my wallet was gone."

He pulled the shoes out of the paper. Black. Pointy, but not in a weapon sort of way. A perfect melding of fashionable with subdued. If only they weren't stolen contraband.

"So there was a man in the store and he offered to buy me the shoes since I didn't have any money," my son said. "He said we should pay him back whenever we get around to it. I tried calling you but the phone was off the hook."

He handed me back my cell phone. "I was rushed so I didn't catch his name. I just filed his number under 'G'. "

I stared at him, my jaw hanging open. "He paid for your shoes?"

He shrugged. "I know. Really nice of him."

I went inside, still dumbfounded, and then shared the story with my husband, who promptly called up Mr. G.

"I don't have any cash on me right now to pay you back…" my husband said.

"Don't worry about it," Mr. G said. "Have a good Yom Tov. Your son looked so disappointed I couldn't let him leave the store without shoes for the holiday."

Well of course not. I know how irresistible my son is but still…

"Okay," my husband said. "We'll have to figure this out since I have to cancel my credit card which means my ATM isn't going to work either…"

Mr. G's gasp was audible through the telephone. "No, no, no," he said. "Don't cancel your credit card! It's impossible that the wallet was stolen! It's right before Rosh Hashanah, the day of judgment. There's no way that anyone took it."

Well, Mr. G's rosy view of Israelis was certainly refreshing. With a healthy blend of optimism and cynicism we froze the credit card temporarily instead of canceling it.

Rosh Hashanah was meaningful and inspirational, especially for my son who spent many long hours in prayer, decked out in brand new shoes without wind flaps. We pushed our little debt to Mr. G to the back of our minds until after the holiday.

After Rosh Hashanah my husband was anxious to rid himself of his debt before Yom Kippur. He wanted all the cards stacked in his favor before God's final judgment. He called up Mr. G.

My husband offered to take a bus over to Mr. G's house to return the money but he wouldn't hear of inconveniencing my husband that much.

Wasn't that convenient! And so it was. We paid Mr. G. whose name we still hadn't chanced upon to catch.

And the wallet was still at bay.

The next morning I was getting ready to go to my exercise class when the phone rang. A woman speaking broken Hebrew with a faint Russian accent spoke on the other end. But I managed to piece together what she was saying well enough.

"Did you lose a wallet?"

The woman was ecstatic. She explained how she had tried to hunt down our number in the regular telephone directory but that our name was misspelled. And she'd been so disappointed not to inform us before the holiday as we'd have to spend three days not knowing where our wallet was. Her daughter had found it on the street on the eve of Rosh Hashana.

She did not pat herself on the back for doing the right thing, she only lamented that she hadn't done it sooner.

And would you believe that my exercise studio is directly across the street from where this woman lives?

It is said that God's presence resides in a more concentrated fashion in the land of Israel. But it is not only in the stones, in the brick and mortar, but in the flesh and blood too – in the hearts and the souls of the people that live in this extraordinary country – in the land and in the nation of Israel.

Avichai's Story
The Blue Beyond
Great Place to Live
Is Eating Supposed To Be Spiritual?
Comments
MOST POPULAR IN Israel
Our privacy policy

The Blue Beyond
Great Place to Live
Is Eating Supposed To Be Spiritual?
Are Jews Against Whistling?
Orphan Visiting Cemetery Before Wedding
Same Pot for Meat and Fish
Reciting Tehillim on Shabbat
Guilt Over Past Sins
Was Shavuot Originally an Agricultural Holiday?
The Jewish Impact on the Founding of America
1 2 3 … 2,984 Next »