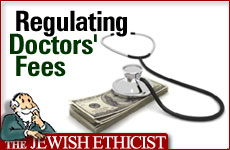 Public authorities are empowered to balance affordability and availability.

Q. Is it fair for public health plans to impose restrictions on physician's fees?

A. Many countries have national health plans which involve significant restrictions on physicians' recompense; currently the United States is considering legislation to extend access to health care and one likely consequence would be that more doctors' fees would be regulated. Some are concerned about this further intrusion of government into the marketplace.

This column will discuss only this question of principle. There is naturally an active policy debate whether particular proposed reforms will be effective, affordable, and so on; all these questions are extremely important but they are quite beyond the scope of this column. We will only discuss the fundamental legitimacy of regulating physician pay.

Judaism in general has a favorable approach to decentralization and market freedoms. We find in the Bible a very suspicious attitude towards powerful centralized kingdoms, and an emphasis on individual rights and the limitation of royal prerogative. However, Jewish tradition also acknowledges the autonomy and authority of the community, and respects the ability of each community to govern itself and make rules as it sees fit. The Talmud teaches, "The citizens of a town are empowered to regulate measures, prices and wages, and to enforce their enactments with sanctions." (1)

Regarding the pay of physicians specifically, there are additional justifications for regulation. Healing is not just a valuable service; in Jewish law it is a mitzvah¸ a commandment. The sages of the Talmud likened the commandment of healing to the commandment to restore lost objects; (2) a person's well-being "belongs" to them, and when it is lost his neighbors have an obligation to restore it to him, if they have the ability.

We find in the subsequent legal literature that this likeness is not merely a compelling image; it is actually a formal legal category. Nachmanides, who was both one of the greatest medieval rabbinical authority and also a physician, wrote that just as a person is not entitled to payment for returning a lost object beyond his out of pocket expenses, likewise a physician is not entitled to recompense for his healing services beyond any expenses or foregone income. (3)

It is important to emphasize that this ruling is not as restrictive as it seems. The Sages were aware that in many instances strict enforcement of the rule would mean that people would refrain from returning lost objects, and the mishna states that in these cases the prospective returner may stipulate that he can return the object only in return for pay. But the mishna also subjects this stipulation to review to ensure that the amount is fair. (4)

By the same token, physicians are entitled to an amount that will enable them to provide their services without loss, and their stipulation is equally valid. (5) Certainly public authorities are obligated to ensure that physician recompense is sufficient to induce qualified individuals to study and practice medicine.

Jewish law does not dictate any specific formula for doctors' salaries, or inform public authorities exactly how to strike the balance between affordable care and providing an adequate number of skilled physicians who provide a high level of service. These considerations are properly the subject of public discussion and professional and political resolution. However, Jewish law does give healing a special status as a Torah commandment, and thus considers this branch of the market an area of special public interest and subjects it to a special degree of public oversight

The Jewish Ethicist: Favorable Judgment
The Blue Beyond
Great Place to Live
Is Eating Supposed To Be Spiritual?
Comments
MOST POPULAR IN Current Issues
Our privacy policy