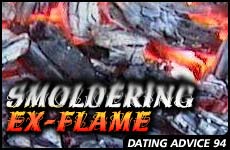 He's still friends with a woman he used to date, and it's making his new date batty.

I am have been dating a man for eight months. He insists on remaining friends with the woman he used to date. He goes to her house and sometimes they eat dinner together. He said that she has a boyfriend, so I have nothing to worry about. I know this is true because I called her house one day and this other guy answered the phone. (I then said I had the wrong number.)

When I told the man I’m dating that I wanted to meet this other woman, he said that she refused to meet me. I called her house with his permission and asked if we could meet. She hung up on me. When I then told him about the phone call, he told me to never call there again.

How can I be sure that something isn't going on between them if she won't meet me?

We don't think that people who were once very involved in a relationship should remain good friends after they break up. There are two reasons for this. One is that the friendship may keep them from moving forward; even if they begin dating someone else in the future, they divert some of their emotional energies into the past, at the expense of the future. They may think that this is harmless, but the fact is that they had developed a certain amount of emotional familiarity, and can't help but continue this along in friendship.

The other reason we are against prolonging such friendships is because it causes precisely the feelings that you are experiencing. You may be worried that the man you are dating will go back to this other woman. Even with his reassurances we can see how you might worry. You have to decide for yourself whether the old romance is really over, or if he unconsciously hopes to resume dating this other woman. Even if you are not worried that this may happen, you may feel cheated emotionally because you want this man to put all his attention into developing your courtship.

There's a very strong likelihood that the man you are dating simply can't grasp the reasons why his continued friendship with this other woman is so troubling to you. He may think that if he doesn't have any interest in dating her again, it isn't a problem. You may not be able to convince him otherwise. If you cannot, then you'll have to decide if you can continue dating him or not.

If you decide to continue dating him, however, we suggest that you let go of the thought of meeting this other woman. We don't see any useful purpose in doing so; satisfying your curiosity is only going to make the other woman uncomfortable, and if you think there's competition you need to size up, you probably shouldn't be dating this man in the first place.

Dating Advice #278 - Dysfunctional Dating
It Takes A Lot Of Faith To Be An Atheist
How Instagram Brought Back This Nostalgic Soup
What Makes Eli Run?
Comments
MOST POPULAR IN Dating
Our privacy policy