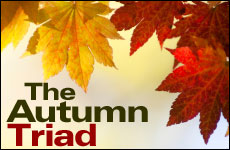 How the High Holiday season actually culminates with Chanukah.

When we think of the month of Kislev, we naturally think of the holiday of Chanukah that begins on the 25th day of the month. Looking on a deeper level, we can discern a thread that ties together the three-month period that consists of the months of Tishrei, Cheshvan and Kislev. We will also uncover a hidden connection between Sukkot and Chanukah.

If we carefully examine the structure of the year, we discern that the year consists of two sets of six months. One set begins with Tishrei, the month when we celebrate Rosh Hashana, Yom Kippur and Sukkot, and continues until the sixth month of the set, which is Adar and the holiday of Purim. The other set of six months begins with the month of Nissan, when we celebrate Passover, and continues through the summer, culminating with Elul, the preparatory month for the High Holidays.

All the structures of time are multiples of six.

These sets of six can be broken down further into two groups of three. Generally, sets of three can be described as being a manifestation of the concepts of thesis, antithesis and synthesis (See Rabbi Aryeh Kaplan's expansion of this concept in Sefer Yetzirah, p. 82). This means that the first aspect of a set of three is the initial concept. The second aspect is its polar opposite. The third aspect is the perfect synthesis, or balance, between the first two.

To understand this better, we can observe this pattern in many different contexts – for example, a debate between two individuals who maintain opposite opinions about a subject. The first person presents his opinion, and the second presents his opposing opinion. Generally, there is a certain truth that each side can agree to. While a kernel of truth is found in each of the respective views, one can find a higher truth which is a synthesis of the two opposing opinions.

We can likewise discern this pattern in the months of the year. The months we have just passed through – Tishrei and Cheshvan, as well as the current month of Kislev – constitute a triad that functions in precisely the way we have been discussing. In Tishrei, we experience an intense opportunity for connection to God, as we ride the successive waves of the holidays of Rosh Hashana, Yom Kippur and Sukkot. As Tishrei draws to a close, the inspiration of those festive days becomes a memory as we enter into the month of Cheshvan, which is the polar opposite of Tishrei.

As discussed previously, Cheshvan is a month which is devoid of holidays, and is described as “the bitter month.” It is a time when the natural state of the world is one of distance from spiritual light. It is a time when we are to search within the darkness for the light of spirituality that seems to have been extinguished.

With the advent of Kislev, we begin to see the synthesis between the polar opposites of Tishrei and Cheshvan. The spiritual light for which we have been searching is now discernible, shining deep within the darkness. There is a balance between the inspiration of Tishrei, and the deeper personal work that is necessary in Cheshvan when there is no outside inspiration.

By contrast, the Second Temple was devoid of open miracles and prophecy.

This synthesis is aptly expressed in the holiday of Chanukah which begins on the 25th of Kislev. It is then that we celebrate and relive the experience of the Jewish people during the time of the Second Temple. That period was characterized by a lower level of spiritual light. Whereas the First Temple period was characterized by daily open miracles, as well as direct communication from God through the prophets, the Second Temple period was devoid of miracles and clear spiritual messages. The Hellenistic way of life disdained the spiritual and glorified the physical, and many Jews fell prey at that time to a hedonistic view of life. It was at that very moment of spiritual darkness that a small group of Jews were able to see past the darkness and find a spiritual light that shone deep within, to be expressed in the miracles of Chanukah.

Here we see two extremes: the open miracles of the First Temple, and the apparent spiritual darkness of the Second Temple. They are brought into synthesis with the subtle miracles of Chanukah – the many who fell in the hand of the few; a miraculous light that would shine for eight days instead of only one. These accomplishments paled in comparison to the miracles of the First Temple, but they represented the synthesis between human efforts and the aid God would provide to animate those efforts. Within the darkness, there was a vehicle we as humans could create for God to reveal Himself subtly in the world.

With this idea we can understand a deeper connection between the holidays of Sukkot and Chanukah. Sukkot occurs in the month of Tishrei, the month of inspiration in this three-month set. It is the holiday when we sit in the sukkah, which helps us relive the experience of the Jewish people as they wandered through the wilderness for 40 years, completely surrounded by the spiritual clouds of God's glory. This revelatory experience was one that we could compare to a gift that the Jewish people received at that time.

We experience the polar opposite in the month of Cheshvan that follows, when our connection to spirituality is hidden. This darkness, however, creates the opportunity for us to create that vehicle for God's transcendent light to appear through our own efforts. The light of spirituality which was originally given as a gift, after the Exodus from Egypt, is finally revealed through human efforts with the advent of the story of Chanukah. Although the revelation is more subtle, it is one that represents the synthesis between God's spiritual gifts and our efforts in being able to reveal and receive those gifts.

We can now see that the three months of Tishrei, Cheshvan and Kislev is a period of time which is about developing our relationship with God, starting with the moment of inspiration, continuing through a more difficult period which depends on our investment, then culminating with the fruits of that determination being revealed as the eight nights of Chanukah light that shine forth through the darkness of winter.

Rabbi Ari Goldwag is a prolific writer, lecturer and musician who lives in Ramat Beit Shemesh, Israel. Visit him at: arigoldwag.com.

Elul: The Time for Closeness

Respect For Others - The Month of Iyar
Live Abortion Panel
Morality and Abortion: Three Views
There Are No Limits
Comments