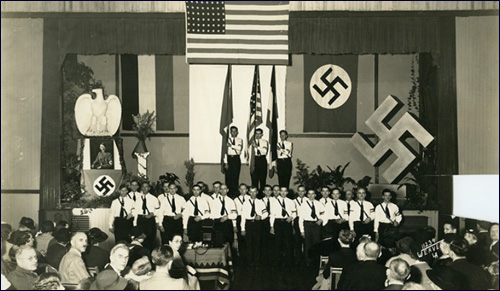 A network of citizen-spies took the Nazi plots to exterminate Jews seriously.

On July 26, 1933, a group of Nazis held their first public rally in Los Angeles. As Jewish groups in the city debated how they should respond to Adolf Hitler’s persecution of Jews in Europe, L.A.’s Nazis, many of them German emigres, gathered at a biergarten downtown, wearing brown shirts and red, white and black armbands with swastikas.

The Nazis belonged to a growing movement of white supremacists in L.A. that included many American brothers in hate: the Ku Klux Klan, a group of Hitler supporters known as the Silver Shirts, and a dozen like-minded organizations with vaguely patriotic names such as the American Nationalist Party, the Christian American Guard, and the National Protective Order of Gentiles. 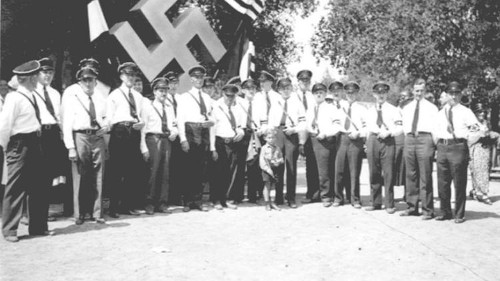 Hindenburg Park gained notoriety in the late 1930s when the Bund, a political group styling itself after the Nazis, staged several rallies there. (Historical Society of Crescenta)

Some weeks ago, white supremacists in Charlottesville, Va., chanted “Jews will not replace us.” Their predecessors were even less subtle: They called for “death to Jews.”

Unwilling to wait and see if any of them would act on their threats, Leon Lewis, a Jewish lawyer and World War I veteran who had helped found the Anti-Defamation League, decided to investigate the anti-Semitic hate groups. In August 1933, mere weeks after the rally, Lewis recruited four fellow World War I veterans, plus their wives, to go undercover and join every Nazi and fascist group in the city.

Lewis’ recruits did not know there would be another world war. And they certainly did not know a Holocaust would occur in Europe.

But once they had infiltrated the groups, they understood that they had to take the Nazi threat seriously. They repeatedly heard fellow Americans talk candidly about wanting to overthrow the government and kill every Jewish man, woman and child.

Lewis’ operatives were all Christian, save for one Jew. They regarded their mission as an American one. Their intention was to gather sufficient evidence of illegal activities by the groups, then turn it over to the appropriate government agencies, after which Lewis planned to return to practicing law. What Lewis did not anticipate is that local authorities would prove indifferent to – or supportive of – the Nazis and fascists. 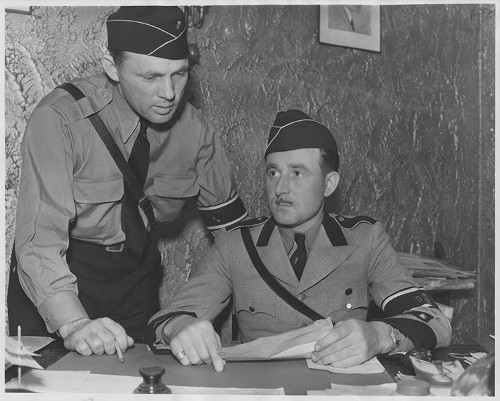 Within weeks of going undercover, Lewis’ network of spies discovered a plot to wrest control of armories in San Francisco, L.A. and San Diego – part of a larger plan to take over local governments and carry out a mass execution of Jews. Lewis immediately informed L.A. Police Chief James Edgar “Two-Gun” Davis of the Nazi scheme to seize weapons and, as Lewis warned in a memo later, to “foster a fascist form of government in the United States.”

Lewis was shocked when Davis interrupted him to defend Hitler. The police chief, he noted in the memo, told him: “Germans could not compete economically with the Jews in Germany and had been forced to take the action they did.” The greatest danger the city faced, Davis insisted, was not from Nazis but from communists living in the heavily Jewish neighborhood of Boyle Heights. As far as Davis was concerned, every communist was a Jew and every Jew a communist.

Lewis got a similar response from the Sheriff’s Department and local FBI agents, many of whom were sympathetic to the Nazis and fascists. He decided he had to continue the operation, and his spies agreed.

From the summer of 1933 until 1945, while many Americans closed their eyes to the hate growing around them, Lewis’ spies and informants, who numbered close to two dozen at the height of operations, risked their lives to stop Hitler’s minions and alert citizens to the danger these groups posed. 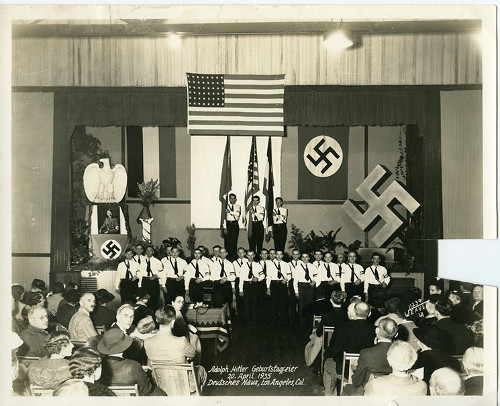 They uncovered a series of Nazi plots. There was a plan to murder 24 Hollywood actors and power figures, including Al Jolson, Eddie Cantor, Louis B. Mayer, Samuel Goldwyn, Charlie Chaplin and James Cagney. There was a plan to drive through Boyle Heights and machine-gun as many Jewish residents as possible. There were plans for fumigating the homes of Jewish families with cyanide, and for blowing up military installations and seizing munitions from National Guard armories on the day Nazis intended to launch their American putsch.

These plans for murder and sabotage failed because Lewis’ operatives penetrated the inner circles of the hate groups and foiled them. Charles Slocombe, Lewis’ ace spy, thwarted two of the most deadly plots to kill Hollywood figures, one of them by turning Nazis and fascists against one another and raising fears that they might be arrested for murder due to leaks inside the German American Bund and Silver Shirts. Slocombe stopped a second mass murder plot by convincing three of the plotters that the mastermind behind the plan, the British fascist Leopold McLaglan, was about to betray them.

Knowing their inner circles had been infiltrated, but not by whom, and unwilling to risk prison, the groups postponed their plans. Permanently.

Without ever firing a gun, Lewis and his spies managed to defeat a variety of enemies. Only after Congress declared war on Germany did government authorities finally relieve Lewis – “the most dangerous Jew in Los Angeles,” as Nazis called him – of the burden of tracking down these dangerous elements. Nevertheless, he and his operatives continued to monitor the groups throughout the war years.

Leon Lewis understood that hate knows no national boundaries. Foreign-born Nazis and American-born Silver Shirts and Klansmen gladly joined together in targeting Jews and communists. And few Americans, either inside or outside the government, tried to stop them in those early years. 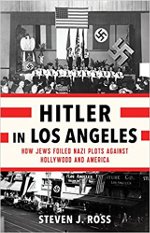 He and his network of spies understood the importance of vigilance. They refused to allow their city and country to be threatened by hate. With their actions they show us that when a democratic government fails to stop extremists bent on violence, citizens must protect one another, no matter their race or religion.

Steven J. Ross is a professor of history at USC and the author of “Hitler in Los Angeles: How Jews Foiled Nazi Plots Against Hollywood and America.”

Steven J. Ross is a professor of history at USC and the author of “Hitler in Los Angeles: How Jews Foiled Nazi Plots Against Hollywood and America.”