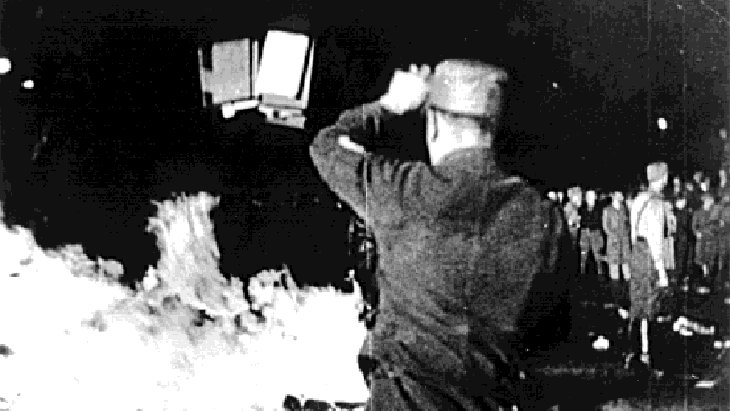 “They don’t hate us as a people. They hate us because of our holy books."

A dear friend who had a secular upbringing and maintains an irreligious outlook took issue, gently, if a bit cynically, with something I had written for Aish.com, a website that reaches out to a broad swath of Jewish readers.

The article was about Reb Yosef Friedenson, z”l, the longtime editor of Dos Yiddishe Vort, the Yiddish-language periodical published for many years by Agudath Israel of America. “Mr.” Friedenson, as he preferred to be called, survived the Holocaust and was a keen historian, meticulous journalist, eloquent speaker – and one of the nicest people I have ever met. I had the pleasure of his company for some 20 years in the Agudah national offices in Manhattan.

In my tribute to Reb Yosef, I included a story from his recent, posthumously published collection of memories, Faith Amid the Flames (Artscroll/Mesorah).

At the start of World War II, when Poland had been overrun by the Nazis, Mr. Friedenson was a 17-year-old living with his family in Lodz. One day, two German soldiers burst into the family’s apartment.

At one point, they demanded the teenager identify the stately tomes on the bookshelf.

He had no reason to lie. “The Talmud,” he answered.

At the mention of the word "Talmud", they became like mad dogs, throwing them on the floor and trampling them.

“At the mention of that word, they became like mad dogs,” Mr. Friedenson recalled many decades later. “They threw the holy books on the floor and trampled them, ripping them to shreds with their heavy boots.”

And when they had left, the young Yosef asked his father why the Nazis had responded so viciously.

“They don’t hate us as a people,” was the response. “They hate us because of our holy books. What is written in them is a contradiction to all they stand for, to their outlook and corrupt mentality.”

My friend was suitably impressed with my description of Mr. Friedenson. “Nice memory,” he emailed me, “of what sounds like a remarkable man.”

But, he continued, “I’ll take a pass, out of respect, as to the assertion that the Nazis hated Jews because of the content of books the former almost certainly never read.”

My friend found it hard to imagine that the Nazis’ hatred was qualitatively different from the antipathy of various ethnic or national groups toward others. His materialistic outlook attributed no specialness to our mesorah, our chain of tradition and, hence, no rationale for how a movement based on power and paganism might find Torah a mortal threat to its success.

I can’t prove otherwise to him, but shared something to buttress Mr. Friedenson’s father’s observation, a memorandum discovered by the noted Holocaust historian Moshe Prager, z”l.

It was sent on October 25, 1940 by the chief of the German occupation power, I.A. Eckhardt, to the local Nazi district governors in occupied Poland. In it, he instructs German officials to refuse exit visas to “Ostjuden,” Jews from Eastern Europe.

Eckhardt explains that these Jews, as “Rabbiner un Talmudlehrer,” Rabbis and Talmud scholars, would, if allowed to emigrate, foster “die geistige erneuerung,” spiritual revival, of the Jewish people in other places.

So it seems that it wasn’t just Jews whom the Nazis hated, but Judaism. In fact, writing in 1930, Alfred Rosenberg, Hitler’s chief ideologue, denounced “the honorless character of the Jew” – his take on the idea of personal conscience and devotion to the Creator – as “embodied in the Talmud and in Shulchan-Aruch.”

The “spiritual renewal” that the Nazi memo author so feared, despite the best evil efforts of the movement he championed, has in fact, thank God, come to pass.

Torah-committed Jewish survivors helped rejuvenate Jewish life on these and other shores, rebuilding Jewish communal and educational institutions and fostering observance of mitzvot and, yes, Talmud study, in new lands. The scope and enthusiasm of the Siyum HaShas, the celebration of the completion of learning the entire Talmud, one page a day, is powerful evidence of that.

Daf Yomi was introduced by Harav Meir Shapiro, zt”l, in 1923. It isn’t known how many attended the first or second Siyum HaShas. But, amazingly, right after the Holocaust, in 1945, thousands of Jews in Israel, the Feldafing displaced persons camp and New York united to mark the third Siyum HaShas.

The 1968 Siyum at the Bais Yaakov of Boro Park drew 300 people; by 1975, at the 7th Siyum, five thousand celebrants gathered at the Manhattan Center; and, at that gathering, the Moetzes Gedolei HaTorah permanently dedicated the Siyum HaShas to the memory of the six million Jews murdered during the Holocaust.

In 2012, the 12th Siyum Hashas filled MetLife Stadium with close to a hundred thousand Jews – joined at a distance in countless other locales by thousands of others.

The Talmud and its learners had emerged victorious.

I Can Do That

The Mitzvot of Albert Mammon

My Children's Jewish Future
Korach 5782: Visit to Lift the Spirit
That Time The Ivy League Found A Way To Limit Jewish Enrollment
Would You Rather Be Right or Happy?
Comments
MOST POPULAR IN Israel
Our privacy policy