The Mufti and the Holocaust 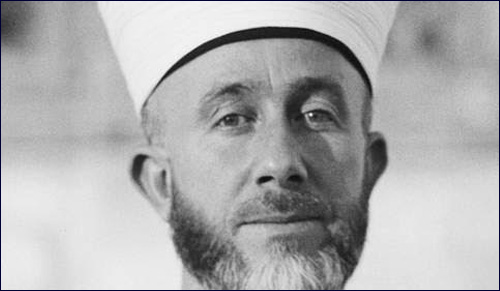 Who was Haj Amin Al Husseini and what role did he play in the Holocaust?

Israeli Prime Minister Benjamin Netanyahu’s recent comments on the Holocaust have landed him in a lot of hot water.

After asserting that Haj Amin Al Husseini, the wartime Grand Mufti of Jerusalem, gave Hitler the idea of executing Jews, saying the best way to deal with Jews was to “burn them”, Netanyahu was roundly and justly criticized. Many even accused him of giving credence to Holocaust revisionists and deniers.

German Chancellor Angela Merkel castigated the Israeli leader, saying “We know that responsibility for this crime against humanity is German and very much our own." Historians rushed to denounce Netanyahu’s faulty grasp of history. Mobile killing squads were in operation before 1941, they pointed out, already murdering Europe’s Jews.

Netanyahu distanced himself from his statements, explaining “I had no intention to absolve Hitler of responsibility for his diabolical destruction of European Jewry. Hitler was responsible for the final solution to exterminate six million Jews. He made the decision.”

But, Netanyahu, the son of a prominent Israeli historian, pointed out, “It is equally absurd to ignore the role played by the mufti, a war criminal, for encouraging and urging Hitler, Ribbentrop, Himmler and others to exterminate European Jewry.”

Although Netanyahu’s remarks were not accurate, there is little doubt that Haj Amin Al Husseini encouraged genocide during the Holocaust.

During the Nuremberg Trials that followed World War II, Dieter Wisliceny, a deputy of Adolph Eichmann, described the Mufti as one of Eichmann’s closest confidants: “The Mufti was one of the initiators of the systematic extermination of European Jewry...and had been the permanent collaborator and advisor of Eichmann and Himmler in the execution of the plan. According to my opinion, the Grand Mufti, who had been in Berlin since 1941, played a role in the decision of the German government to exterminate the European Jews. He had repeatedly suggested to the various authorities...the extermination of European Jewry. He was one of Eichmann’s best friends and had constantly incited him to accelerate the extermination measures.” When Eichmann was captured and tried in Israel in 1961, Golda Meir called for Al Husseini to be tried, as well.

Although the Mufti was hardly the first to call for killing Europe’s Jews – mobile killing units had already murdered close to a million Jews by the time the Eichmann met the Mufti – Al Husseini was at the very least an enthusiastic supporter, and possibly a collaborator in wiping out Jews.

As a young man, in 1920, Al Husseini gained notoriety by doing just that. The son of a previous Mufti of Jerusalem, in April 1920 Al Husseini used a local pilgrimage ceremony near Jerusalem to whip up anti-Jewish fervor. In the ensuing riots, five Jews were murdered and hundreds were injured.

Convicted of incitement by the British authorities, Al Husseini fled to Damascus – then returned a few months later after being pardoned by a new British High Commissioner. The following year, Al Husseini assumed the role of Grand Mufti of Jerusalem. He was still in his twenties and his religious qualifications lagged behind many of his rivals, but he had a forceful personality and was able to rally many of his fellow-believers around a popular cause: hatred of the region’s Jews.

Under Al Husseini’s leadership, resentment of Jews reached a fever pitch. Accusing Jews of wanting to destroy the Al Aqsa Mosque in Jerusalem, he sparked a series of pogroms that began in Jerusalem in August 1920 and soon spread to Safed, Hebron, Haifa, Tel Aviv, and elsewhere. Within days, 133 Jews had been butchered and 339 injured.

When the fiery Mufti was caught receiving funds, weapons and military instructions from fascist Germany and Italy a few years later in 1936 – planning a revolt against British rule – the British issued a warrant was issued for his arrest. Al Husseini fled – first to Iraq, and later – at Hitler’s personal invitation – to Germany, arriving in Berlin in 1941.

Al Husseini lived in luxury during the War, splitting his time between Berlin and Rome. He was photographed with Hitler and often dined with Heinrich Himmler. Hitler gave him a staff of sixty to run an Arabic-language radio service from Berlin and foment anti-Jewish sentiment in the Middle East. Jews, the Mufti exhorted on the air, “live...as parasites among the peoples, suck their blood, steal their property, pervert their morals”. The Mufti also helped raise a dedicated Muslim Division of the Waffen SS in Yugoslavia.

As Barry Rubin & Wolfgang G. Schwanitz write in their book Nazis, Islamists, and the Making of the Modern Middle East (Yale University Press, 2014), the Mufti also offered Hitler the possibility of wider geopolitical strength. “In exchange for Berlin’s backing, (Al Husseini) pledged to bring the Muslims and Arabs into an alliance with Germany; spread Nazi ideology; promote German trade; and ‘wage terror,’ in his own words, against the British and French…. The Nazis were eager for this partnership. They established special relationships with the Muslim Brotherhood, the Ba’ath Party, the Young Egypt movement, and radical factions in Syria, Iraq, and Palestine. Berlin also hoped to build links with the kings of Egypt and Saudi Arabia. These Arab movements and Nazi Germany had the “warmest sympathy” Hitler explained, “for three reasons. First, we do not pursue any territorial aspirations in Arab lands. Second, we have the same enemies. And third, we both fight against the Jews. I will not rest until the very last of them has left Germany.'”

Inspired by the Holocaust, it seems Al Husseini hoped to emulate the systematic murder of Europe’s Jews in the Middle East. Envisioning huge crematoria for Jews in the Dotan Valley near Nablus, Al Husseini confided his plans to burn the bodies of Jews from the Land of Israel, Iraq, Egypt, Yemen, Syria, Lebanon and North Africa in them. (http://jcpa.org/al-aksa-libel-advocate-mufti-haj-amin-al-husseini/#sthash.nYRtkqCg.dpuf)

The defeat of Nazi Germany put an end to the Mufti’s plans. Arrested by the French after the war, Al Husseini was allowed to escape, and made his way to Egypt, where he remained influential and outspoken in his Jew hatred.

Though his military might was over, he continued to spread his ideas until his death in 1974. Al Husseini influenced the nascent Arab League to put a clause in its charter that its purpose was to destroy the “Zionist entity” and to declare war against the nascent Jewish state. In 1996, the Israeli newspaper Haaretz quoted Yasir Arafat’s younger brother and sister saying that Al Husseini has been a “father figure” to the young Arafat during his childhood in Egypt.

Al Husseini's toxic legacy of virulent Jew-hatred lives on today. In helping shape Arab policy, in influencing a young Yasir Araft, in spreading slanders about Jews that persist to this day, Al Husseini continues to be a force for ill-will and hatred throughout the Middle East and beyond.

15 Reasons to be Proud of Israel

Why One Muslim Was Buried in a Jewish Cemetery