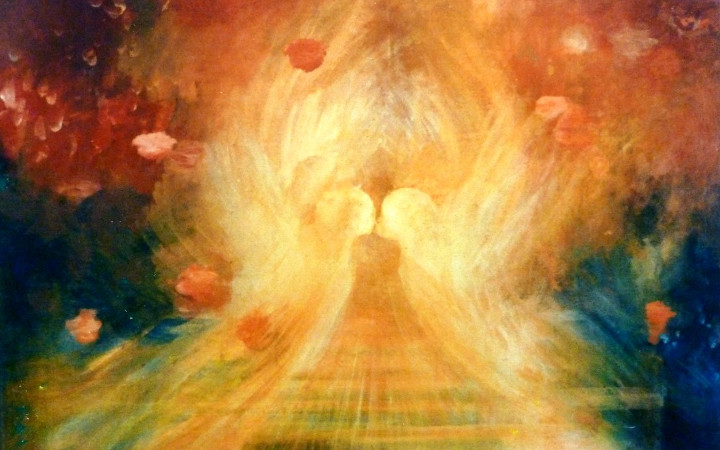 THREE VISIONS OF THE CHERUBIM

During the course of his artistic life, Raanan has painted many versions and variations of the cherubim.

They first appear in the Bible at the gates of the Garden of Eden, stationed there to guard the way to the Tree of Life, after Adam and Eve were banished. At a later period, the cherubim appear gracing the cover of the Ark in the Holy of Holies. There, they had a dual purpose – to serve as the vehicle for that which is above, and to watch over that which is below. On the one hand, they were protectors of the Ark, “sheltering the cover with their wings,” guarding it and the Torah scrolls within. On the other hand, the “cherubim spread out their wings on high,” thus serving as a vehicle for Godliness. In all three paintings there is a strong vertical movement upward, as the cherubim stretch their wings toward a world that lies beyond. And in the vision of Ezekiel, the cherubim escorted the Presence of God out of the Jerusalem Temple before its destruction. (Ezekiel 11:22-23)

Fashioned as male and female, the cherubim on the cover of the Ark were molded from a single block of solid gold and were endowed with supernatural qualities. When there was closeness between the Israelites and God, they embraced; when the people went astray, they turned away from each other. (Yoma 54a-b) The Talmud also relates that when the Babylonian conquerors broke into the Temple and entered the Holy of Holies, they saw the cherubim embracing. Thus the cherubim symbolize the love between God and the Jewish people, a love that endures even in the worst of times, even when there is no longer a Temple.

Raanan says of the cherubim, “Over the years they just appeared within my paintings. When I noticed them I was inevitably moved to bring them out, to make them more visible. And as I gave them form – using my hands simultaneously and symmetrically, painting their faces with my two thumbs and their wings with my palms – I was always amazed to see that one of them came out male and the other female.” 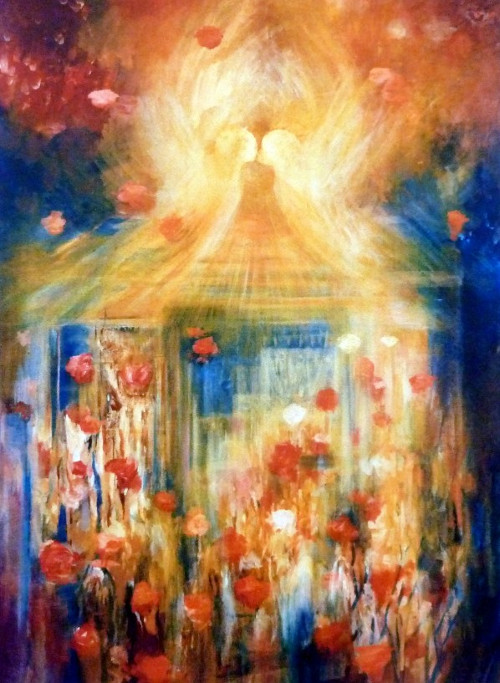 This painting was inspired by a commission to paint the love relationship depicted in the Song of Songs, an affinity that parallels that of the cherubim in the Holy of Holies. Raanan overlaid the painting with layers and layers of transparent color, giving it luminosity. He was searching for a balance between beauty and love, and the “thorns” of life, which appear intertwined with roses in the lower half of the painting.

Jewish tradition believes in a celestial Jerusalem, an upper Sanctuary that was never destroyed. The cherubim in this painting seem to be a vision of the heavenly cherubim, hovering with outstretched wings in the blue expanse of heaven. Surrounded by roses, they seem to be kissing. Kisses and roses are frequent symbols in the Song of Songs, which is understood as an allegory of the love relationship between God and Israel. The opening words, “Let Him kiss me with the kisses of His mouth,” are sometimes said to refer to mystical secrets of the Torah which God imparts “mouth to mouth” to His nation, which is compared to roses. When the Holy Temple stood, God’s Voice revealed His secrets from the depth of the space between the cherubim.