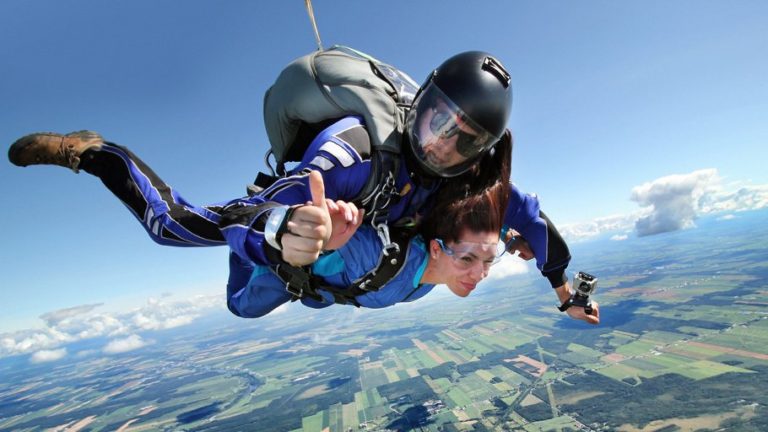 Facing our mortality should drive us to fulfill our unique mission in the world, not jumping out of a plane.

Bucket lists are invariably filled with ideas about travel to places you’ve never been, adventures you’ve never had, people you’ve never met. The common denominator is one idea: “The saddest people who approach death are those with regrets about things left undone.”

But what’s wrong with the way most people think of a bucket list is that far too often its chief concern is the self. It’s trying to figure out what we’ve missed out on in terms of personal enjoyment. Its chief concern is worrying about whether we have fully partaken of the joys this earth has to offer.

Rosh Hashanah shows us another way to think about a bucket list. It’s a list rooted in the realization that all of us are mortal. We have a limited lifespan. One of the most important goals of the High Holy days is to recognize that we are put here on earth for a purpose. Our lives carry a mission which represents our reason for having been created.

Preparing for the High Holy days entails identifying the reason for our presence in the world.

Preparing for the High Holy days entails identifying the reason for our presence in the world – what it is that we contribute to society at large, to our people, to our families and even to God. It isn’t our wealth but our self-worth which represents our best claim for continued life and blessing. It’s knowing that our lives made a difference, whether we played a role, no matter how small, in helping to make this a better world.

Playing in the Symphony of Life

This remarkable story illustrates the point. A century ago the world revered a great symphony conductor, an Italian maestro named Arturo Toscanini (1867 – 1957), who led concerts all over the world. He was known as an absolute perfectionist and had few peers. Toscanini had a biographer who would interview him periodically over the years as a part of a major book he was writing.

One evening he called Toscanini and told him that he would be in town the next night, and asked if he could come to the house to interview him. Toscanini answered that he could not because he would be doing something special that would require absolute concentration; he could not be interrupted. “Maestro,” the biographer said, “what are you doing that’s so special?”

“There is a concert being played overseas. I used to be the conductor of that symphony orchestra, but I could not be there this year. So I’m going to listen on a shortwave radio and hear how the other conductor leads the orchestra. I don’t want any interruptions whatsoever.”

“Maestro, it would be my greatest pleasure to watch how you listen to a concert played by an orchestra that you used to lead. I promise I won’t say anything. I’ll sit on the other side of the room, quietly.”

“If you promise to be perfectly quiet, you can come,” Toscanini said.

The next night, the biographer came and sat quietly while Toscanini listened to the concert, which lasted almost an hour. When it ended, the biographer remarked, “Wow, wasn’t that magnificent?”

“They were supposed to be 120 musicians, including 15 violinists. Only 14 of them played.”

The biographer thought he was joking. How could he know from six thousand miles away, over shortwave radio, that one of the violinists was missing? The biographer had his doubts but didn’t want to say anything and went home. The next morning, he called the concert hall overseas, asked for the music director, and inquired as to how many musicians were supposed to have been playing the night before versus how many had actually shown up. The concert hall director told him that there were supposed to be 120 musicians, including 15 violinists, but only 14 had shown up!

The biographer was amazed. He returned to Toscanini and said, “Sir, I owe you an apology. I thought you were just making it up the other night. But please, tell me, how could you know that one violinist was missing?”

“There is a great difference between you and me,” Toscanini answered. “To the audience everything sounds wonderful. But I’m the conductor, and the conductor has to know every note of music that has to be played. When I realized that certain notes were not being played, I knew without a doubt that one of the violinists was missing.”

We should take the story’s message to heart. Every one of us has been given the gift of playing a part, small as it might be, in the symphony of life. It may seem insignificant to some. But the Conductor is intensely aware of our playing, of every note we hit correctly as well as every mistake that mars the beauty of the entire performance. For as long as we are still a member of the orchestra, we have the privilege to faithfully carry out our assigned task to the best of our ability.

Rosh Hashanah is the time for us to create the bucket list of self-improvement that will hopefully convince God we are not yet superfluous. That is the bucket list which does not precede death but rather can mean additional years of life – and a legacy of eternity.

Rabbi Blech’s new book Hope, Not Fear: Changing the Way We View Death helps readers approach the end of life with calm. More than six years ago Blech was diagnosed with a fatal illness and given six months to live. Over the course of his career Rabbi Blech had counseled hundreds of people through the losses of loved ones and their own end of life, but when confronted with his own unexpected diagnosis he struggled with mortality in a new way. This personal and heartfelt book shares the answers people grappling with the end of life want to know – from what happens when we die to how we can live fully in the meantime. Hope, Not Fear shares the wisdom and comfort we all need to view death in an entirely new light. Click here to pre-order.

The Only Thing to Worry About on Rosh Hashanah

Why It's So Important for You to Judge Others Favorably
Blessing on Chewing Gum
Was Rahab a Prostitute?
Extras In Our Own Epic
Comments
MOST POPULAR IN The High Holidays
Our privacy policy